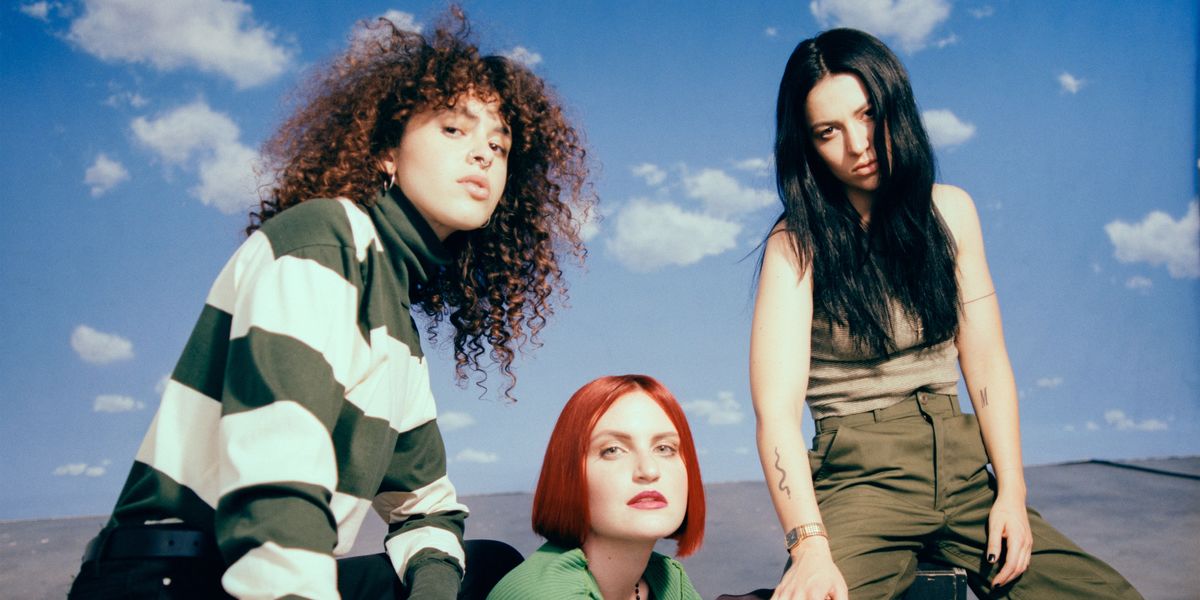 Queer pop trio MUNA are sure to get some new number-one fans the world over with this irresistible first single from upcoming sophomore album, Saves the World (out September 6). Atop a pulsating synthpop groove, lead singer Katie Gavin waxes poetic about the voices in her head: "I heard the bad news/Nobody likes me, and I'm gonna die alone/In my bedroom," she sings in the opening lines. It makes room for a song that morphs, butterfly-like, from negative self-talk to vibrant, all-encompassing, self-love anthem. Turn this up loud, lip-sync into your hairbrush, dance like no one's watching and become your own number one fan. Also, watch the single's video and celebrate the fact that MUNA, like all of you, are fucking stars.

Like MUNA, Kiiara and her cohort have crafted what will surely become a legitimate song of the summer 2k19 contender. Everything about "Open My Mouth," the first single from the LA singer's long-awaited full-length debut, positively sparkles like the summer sun on glittering pools and white-sand beaches. She sings tenderly about overcoming self-doubt, "I try to surrender," goes one line. As the song builds steam, Kiiara contemplates the consequences of speaking up for herself, "Each time I say something, I only start something/Better if I say nothing, nothing at all." But then, the chorus hits, and... do you feel that rush? The hair pricking up on the back of your neck? Pure Pop "Gold" (Get it?).

Madonna unleashes her latest taste of Madame X today, in "Dark Ballet," which has a dramatic Joan of Arc-themed video starring none other than Mykki Blanco. The song is indeed a somber meditation on the state of the world, and an indictment of perpetrators of gender-based, racial, and sexual violence. Over mild vocoder, a hard, slow beat, and a flurry of piano notes, it sounds like one. The song mutates halfway through to a severely distorted section where that piano races like a wild heartbeat and Madonna muses about "god" and people who are burned at the stake. There is also a clever, but no less impactful spoken-word moment during which the superstar tells those in Supreme hoodies (get it... white supremacy, in other words, she's saying) that the "howl of the wind" aka radical, necessary change, is near. Let's hope a new paradigm truly is among us.

Vincint's new single "Say" possesses infinite charm: from its infectious '80s groove, to the unstoppable force of nature that is the rising queer R&B singer's voice, to that chorus about the sparkle in a lover's eye. It's all very maximalist, "I Wanna Dance With Somebody"-style euphoria. And please "say" you'll stay for that key change. Laid me out flat.

Saro's "Field of Bees" is a deceptively (almost) sunny surprise in the field of addictive darkness that is his newest EP, Die Alone. Which is to say, at first pass, it definitely sounds like it could be a happy song, but then, you tune in beyond the brightened, yet still-ominous electronic arrangement, or Saro's soaring choruses. There are lyrics about a relationship's slow dissolve: "Ask the heavens why," "Was our kingdom made of sand?" "Was it your blood on my hands?" "Did we ever stand a chance?" "How do we talk to the demon?" It's the sonic equivalent of a crushed heart held in hand, like granules of sand sifting through fingers, but that doesn't make "Field of Bees" any less memorable.

Kiana Lede releases her new EP Myself today, and "Bouncin" with Offset is a refreshingly upbeat entry into the R&B upstart's more pensive catalog. The song cops a melody that reminds me of the Vengaboys' dizzying 2000s Eurohouse track, "We Like to Party!" (Lyric from that track: The Vengabus is coming/And everybody's jumping New York to San Fransisco.) But rather than take her party from city to city, Lede is hosting a body party for two. "I'll take you to my house/and I'll show you all around it," she coos. It's sassy, sexy, and will surely bounce to its rightful place on the top charts.

Carlie Hanson's debut EP, Junk is here, and among its deliciously sullen, rock-flavored teen angst about love, self-discovery, her past and her future, is this gem. "Bored With You" opens the EP with Hanson's beatboxing and singing about how life is better hanging around bored with the apple of her eye than anything else. It's an effective chronicle of mundane teen experience, on one hand. But it is also an example on a record full of examples of why Hanson is a name and presence to watch. Musically speaking, Hanson is a rising talent who appears unafraid of risk, nor her willingness to be vulnerable, nor, perhaps most inspiring: her mess.

K. Flay's "Sister" is both an electric new entry in the queer musician's consistently exciting catalog, and an effectively inclusive statement on the meaning of chosen family. "Everything you do I wanna do, everything you know I wanna know," she sings, acting as your favorite ride-or-die. "If you kill somebody I won't tell no one on you." (Dark, but I love that last line, especially.) The desire to be someone's sister comes from her own experience growing up in what some might call a "broken" home of divorce, death, and anxious apart-ness, but K.Flay transforms it into a glitchy, memorable tune, in which a "sister" could be anyone you see that way: a friend, a lover, no matter the gender or DNA. The track is the latest in a string of singles from her forthcoming sophomore LP, Solutions, out July 12.