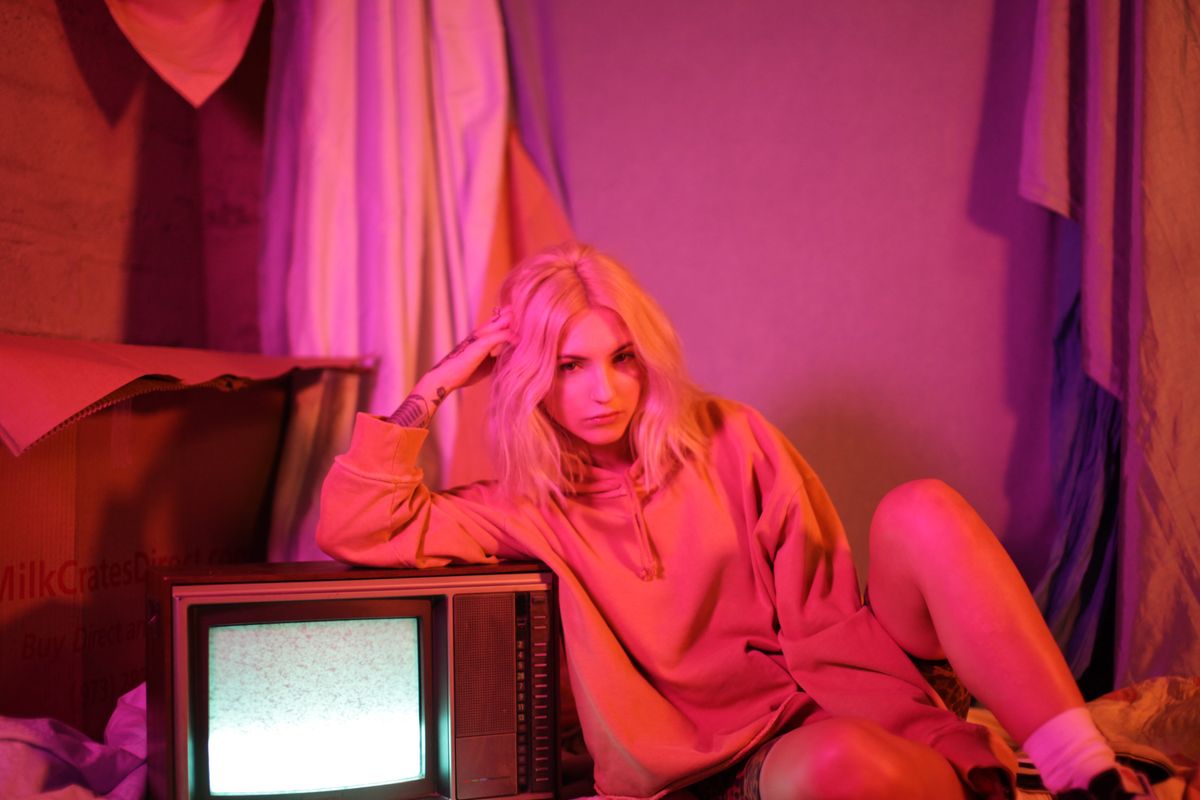 Pop trendsetter and songwriter extraordinaire Julia Michaels returns with the second installment of her inner monologue. New EP Inner Monologue Part 2 picks up from where her first one left off, deepening the singer's examinations of love, self, and the world around her with astonishing clarity. "Hurt Again" is one standout, not least of all for its emotional intelligence. Coasting on a breezy groove bolstered by sparse handclaps and a guitar lick, Michaels tells the story of an intoxicating guy who "takes up all my weekends" and "reminds me of my past." In the song, she's newly single and enamored with the possibility of new romance — a theme in her music that she charmingly acknowledges (see: Part 1's "Happy") — and by the anthemic chorus, listeners hear Michaels' readiness to being hurt again. So honest! For Michaels, daring to love might be worth the pain, but at least she gets great art out of the journey.

Kim Petras just might have released one of this year's most compelling pop collections, if not one of the most compelling pop collections of the past five years. This is obviously such a feat for a new artist whose rise to fame and acclaim has been meteoric in the last year, but one that can only be accomplished with great Clarity. From start to finish, the album builds on Petras' natural gift for tuneful melodies, and co-writing big, shiny pop bangers with sharp hooks aplenty. The voice, full of power and passion, is the icing on the cake. "Icy" finds Petras trying on pop's electro R&B-leaning edges for size, and fitting into them like a satin glove. The song isn't about what some might think at first glance: bragging about wealth or success. It actually flips the idea of money buying happiness. Petras sings about being spurned by a lover, and realizing she's wasted time. To recover, she buries herself in a sub-zero tundra: "So numb, I don't feel it inside me" after smirking, "kinda funny how the money can replace love." If Petras has been burned by the heart of passion, on "Icy" she reminds lovers past and future that ice burns, too.

Earlier this year, Philadelphia native and 19-year-old rising pop artist JUJ emotionally chronicled her move from her hometown to Los Angeles to pursue her music in breakout single, "Mood." Now, the bittersweet R&B-influenced jam gets a re-up with a somber verse from Chicago's Vic Mesna, who shares the trauma that emerged when he too chased "a dollar and a dream." "My brother got killed that same week/I can still hear the screams." Together, Mensa and JUJ make a powerful connection between finding peace of mind to going after what they want in life. As JUJ already understands, "fear won't tell me what to do" because, after all, life is for the living.

Yves V's "We Got That Cool" with Swedish dance-pop duo Icona Pop and Afrojack flips a '90s house classic into a crisp, modern production that is effortlessly smooth. On the track, Icona Pop are singing about all-night euphoria, a familiar theme for them, while also searching for meaning and deeper connection on the dance floor. "I feel it in my body, down through my legs," Caroline Hjelt and Aino Jawo sing. "We're not going nowhere, looks like we just started/Keep on giving me all you've got." The song reminded the duo of their roots as DJs, and inspired them to make a cut about being present for the summer. Here's to owning your sense of cool this summer — and perhaps finding someone special along the way to share it with.

Daniel Caesar, who is fast becoming one of this generations most promising R&B poets, releases his heady, existential sophomore album Case Study 01 today. For "Love Again," he enlists the legendary Brandy for a deep slow jam about relationship authenticity. She calls out suitors who make themselves romantically unavailable with missed communications and miscommunication, asking them to step up. Caesar and Brandy swim through those waters together, making a beautiful case for why it's important to keep an open heart.

Singer-songwriter Lucy Dacus makes a strong case for anti-patriotism in new Fourth of July single, "Forever Half Mast." The song, which cruises on steady drums, country guitar, and slick delivery, is the latest in a string of holiday-themed singles from the musician, following her cover of "La Vie En Rose" for Valentine's Day and original song "My Mother & I" for Mother's Day. Dacus sings about how being American is a double-edged sword that comes with personally confronting our nation's history of colonization and corruption, both here and abroad. "Yes, you're evil, but you're not that bad/ You put out your palm more than the back of your hand." But that indictment, she argues, can be fuel for something positive: acceptance. Personal victory and joy goes hand in hand with injustice. Can we talk about it? The bittersweet solution: "Let your flag fly at forever half mast."

The recently reunited (again) Danity Kane seemed to quietly release their new single as DK3 this week, the buzzy "Neøn Lights." The song will surely unite fans of the trio's more energetic offerings, as it possesses no shortage of empowering, catchy hooks and sunny harmonies. The track intentionally zooms in and out of focus, like a hectic night at the club, where strobes pulse and disrupt senses. Given the group's history with tightly choreographed performance, Dawn Richard, Aubrey O'Day, and Shannon Bex bob and weave with ease together amid the fray. Let this song guide you to the euphoria you seek.

Clairo continues her voyage into deeper vulnerability with single "Closer To You," following "Bags" from her debut album Immunity. Where that single opted for jangly '90s rock, on "Closer To You," she tries on elaborate, vocoder harmonies reminiscent of the girl-group vocal arrangements of Dirty Projectors. Clairo's performance here is still raw, emotionally stunned by her inability to stop herself from falling hard for someone. She names that out-of-body feeling with lucid observations of her own behavior: "You call me late at night/I pick up every time." Like the magnetic pull she feels toward her love interest, the more we hear Clairo's perspective, the nearer we draw.

Where queer electronic pop musician Blew Velvet's last single "A Sacrifice," confronted a willingness to be transformed from burdened martyr to renewed self, their latest, "A Mirror," tackles the self they are now left with. Emerging from the ashes, frenetic synths and a steady Robyn-esque groove guide Velvet's journey toward greater self-love. "I won't keep a thing/And nothing will change," they sing with calm acceptance. "I'll give what I get/Like a mirror for you."

Conan Gray has rapidly grown a fiercely loyal legion of fans, in part due to his willingness to wear his heart on his sleeve. "Checkmate," which is as instantly sticky as it is emotional, showcases a singer taking his power back in a relationship riddled with mind games. "They'd call me super drunk in the middle of the night telling me they loved me, then they'd spend the next week cold and ignoring me," Gray says of the person who dared play games with his heart. Given the song's loaded subject matter, "Checkmate" is refreshingly clear and breezy. It's Gray's way of winning the game, so to speak.