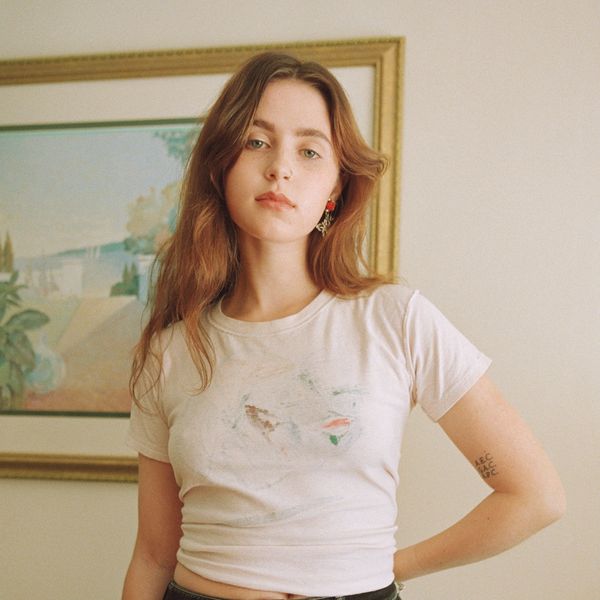 Clairo's first taste of debut album Immunity takes her trademark charm and gives it a dose of emotional heft. "Bags," with its electric guitar strums, skittering synths, and skipped drums, heralds the coming of a proper rock record for Clairo, a marked shift from the hazy electro-pop that made her famous. (This doesn't make Clairo's music more legitimate, as sexist rockists would have you believe — it already stands on its own). Clairo's lyrics, this time detailing the end of a relationship, are just as honest about everyday life as before. But Clairo imbues them with refreshing vibrancy: "Can you see me using everything to hold back?" she deadpans, albeit deceptively. By the time the final lines, "Walking out the door with your bags" arrive, we don't know what happens next for Clairo. This is exciting, because Clairo can go anywhere from here.

Related | Viral Pop Singer Clairo Was Raised on the Internet

The newest song and video by London singer/songwriter/rapper Bree Runway is 1,000% lit. Over manic trip-hop beats and a mind-numbingly repetitive vocal sample, Bree zooms between flows, from rapping to singing, as if playing 20 eclectic characters that live in her head. She addresses haters, her support system, and society's expectations of her — transcending all, of course. "2ON" is the kind of song that might blindside you with its intense energy, but my guess is you'll find yourself completely enamored with Bree's winning personality.

You thought you heard Kim Petras get vulnerable? While the pop star's recent single "Broken" introduced us to a side we'd never seen before, "All I Do Is Cry" ups the ante. The beats are minimal (and continuing in a recent theme, fairly trap-inspired), allowing plenty of room for Petras' big voice to flourish and to ruminate on the high drama of love lost. "I just want for you to need me/ You're just gonna keep me bleeding," she sings. Then: "I feel like I'm drowning." A bummer, but a bop just the same! Meanwhile, Petras recently sold out the North American leg of her Broken Tour during pre-sale and the European leg during on-sale, so clearly her new material continues to resonate. What comes next?

Carlie Hanson's latest single, "WYA" from her forthcoming debut EP, Junk, is like a letter to Hanson's future self. Using a melancholy guitar loop and modern percussion, Hanson's lyrics address a young woman who maybe grew up too fast. She chronicles leaving her small hometown for dreams in the city, making new friends, and hitting the big time. But there's no judgment over what has changed or how Hanson's changed, but rather, self-possessed, calm reassurance: "If you did, you can always go back, girl," she sings. As usual, the hooks and melodies stick in a way that make this song feel even more personal. We all wish the best for our futures, but Hanson reminds listeners that such a journey starts with you.

Related | Behind the Scenes of Carlie Hanson's American Heist Fantasy

Fletcher releases the newest single from her upcoming EP, "About You." We know by now (singles "Un-Drunk" and "If You're Gonna Lie") that Fletcher deals with matters of the heart, but the singer-songwriter documents her hard-earned luck, or lack thereof, in love with surgical precision and unexpected details. On this song, Fletcher harmonizes herself around a carousel and up to heavenly ecstasy, unable to free herself of a lover's grasp, both metaphorically and literally. A) Listen to the power with which she sings the chorus, then, B) this line from the bridge is like a punch to the gut: "A thousand miles away/ But you still got your hands on me," she sings. We can't stop thinking about you either, Fletcher.

Norwegian alt-pop singer Astrid S's new song, "The First One" is a lesson in accountability, sort of. She acknowledges coming up short in relationships. She can't fully give her heart to another because she hasn't let go of her first love. Astrid makes it all sound so sweet and easy, with plenty of sugary melodies, but it's anything but: "Promise you it kills every time you send a picture from a place you and I used to go," she sings in the bridge. But as hard as it was for Astrid to admit her hang-ups, it's perhaps harder for her to change what she feels powerless over. "There's nothing I can do about it," she sighs. Though the song doesn't arrive at a resolute conclusion, such an admission is a good first step toward healing.

Swedish pop iconoclast ionnalee presents a more hopeful vision of the future than we've heard in recent memory. The idea that the future is dystopian and terrifying isn't a new one, but it is certainly popularized by shared feelings of dread surrounding fraught world political climates. "Remember the Future," the title track from her upcoming solo album, out next week, is, as ionnalee explains, "about finding an alternate light to aim against when all has gone to blazes." The song features shimmering electronic, '80s-leaning production and sunny harmonies. Ionnalee advocates for a "hunger for more," and "a simple hope." She assures us in five minutes that "this is not the ending" — a powerful sentiment worth holding onto in trying times.

Miya Folick's latest is a cheeky, revelatory exploration of beauty language, that is, the contradictory language women in Western societies are given about themselves repeatedly. "Malibu Barbie" is a metaphor for how women are taught to pursue perfection — "an informal education," Folick calls it — and she sells it with chugging guitar, sugary-sweet melodies, and acidic one-liners such as "Nip and tuck until I'm nothin'." Songs like these always have relevance so long as women are forced to give into patriarchal obsessions, but what also makes this shine is the idea that how Folick sees (or has seen) herself isn't on some kind of measurable continuum. "Oh no, I'm still a human being," she sings in the closing line, acknowledging that her journey is constantly in flux. Who Folick is, is not a destination.

Uffie's "No Take Me Backs" is her first taste of new music since dropping her long-awaited Tokyo Love Hotel EP earlier this year. Its triumph rests not only in how fresh it sounds, which will surely delight new fans, but in how it homages early Uffie style, the delightfully goofy sing-rapping that made her famous when "Pop the Glock" first hit MySpace nearly 15 years ago. These days, she's cooing about "getting her mind right underneath the limelight" amid rumbling bass on the low end. She's "too busy making money for my people," and as she says, if you have her once, you can't have her back. What we see with Uffie is what we get, in other words, but the fun part is never knowing what to expect.

Rising Jamaican dancehall star Shenseea turns a popular hashtag into a certified hip-swiveling banger. "Blessed" features a guest verse from Tyga, and a sticky "way too blessed" hook liable to kick any party into high gear. The track was produced by Bad Bunny and Sean Paul collaborator, Rvssian, and is a look at what's to come from Shenseea, who is recording her debut album. Anyway, turn this on and feel like a star. You deserve to.