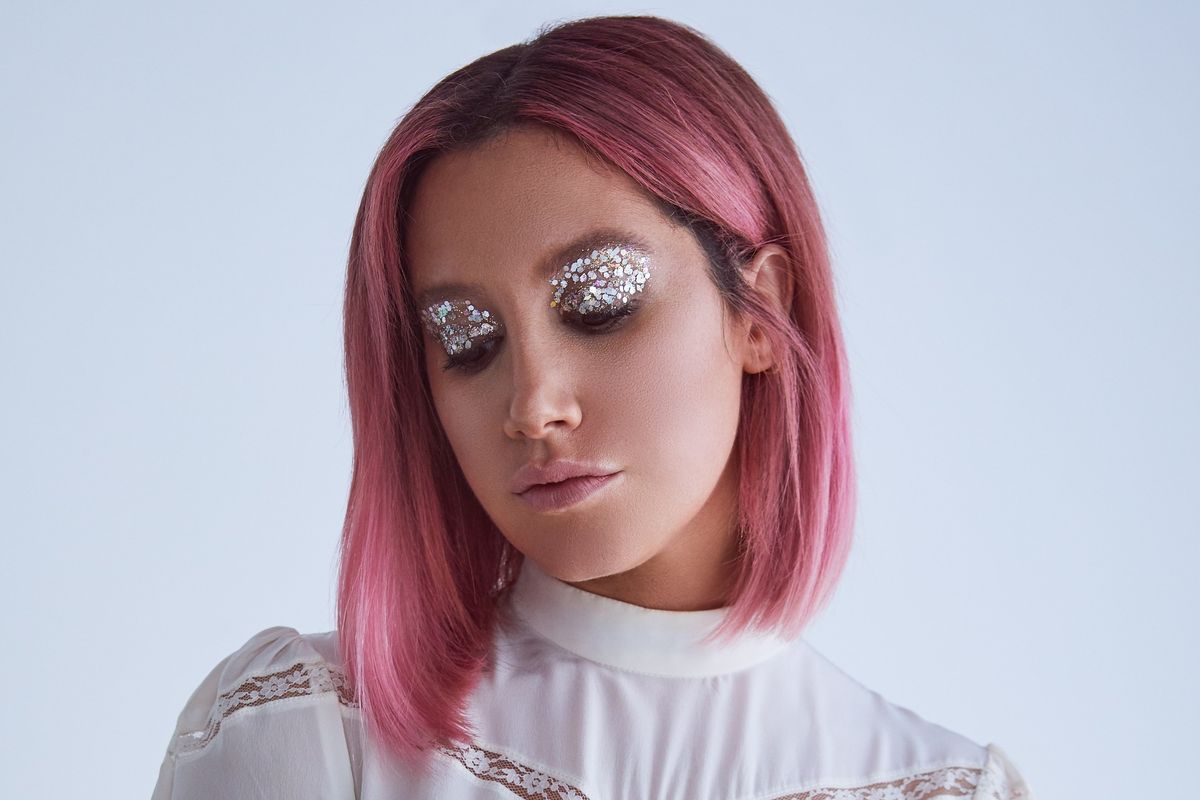 Ashley Tisdale drops Symptoms, her first album in 10 long years today, and as PAPER recently learned, so much has happened in that period of time. Namely, she's grown up well beyond her Disney beginnings (though she agrees that her Sharpay-era red-carpet looks are iconic, and they are), married, become a TV show producer, and navigated her fair share of mental health-related ups and downs. Now armed with the clarity of therapy and self-love, Tisdale, inventor of glam teen angst, is getting more personal these days and is all about good vibrations. Case in point: "Vibrations," a Symptoms deep cut bolstered by sparse beats and echo-y synths, carving out room for Tisdale's self-penned lyrics about a quiet night in LA: "Don't go looking for trouble these days/ All grown up in a different place," she sings. "Used to hang at the clubs and go out," but now: "a glass of rosé is my style." Turn this up to turn down, whatever your preference may be. Just don't kill anyone's good vibes.

Dark-pop sorceress BANKS returns with the lead single from her upcoming album, following 2016's The Altar. "Gimme" is a harder-hitting banger than we're used to from the California singer-songwriter, which is more than welcome. Opening with a distorted vocal sample and an '80s synth bassline recalling the best of the Eurythmics, BANKS outlines a track designed to put her desires at the forefront: "Gimme, gimme what I want/ What I deserve/ Gimme, gimme you," she sings. "You" is delivered with self-aware power, as the booming beat drops into a kind of sexy whiplash. We definitely are ready for BANKS to, as Britney once said, Gimme More.

Vampire Weekend deliver their first album in six years, Father of the Bride, and it's filled with rhythmic rock fusing psychedelic '70s folk and colorful world music. Not to mention, those A-list collabs with HAIM sister Danielle and The Internet's Steve Lacy. One of our favorites though is "Sympathy," which is one of the handful of songs without a feature. Sonically, its numerous and rollicking shifts — from patterned handclaps and Casio choirs to sliding guitar scales — evoke wild road trips across the Wild West. It's great fun, for a new generation of folks needing to practice a bit more tenderness.

Asian Da Brat's latest mixtape, UNFUCCWITABLE is out now. Most of the songs are an infectious blend of muddy trap with deep, rumbling bass and minor-key, D4L-style blips, but on "SHHHH," she keeps the energy high, silencing naysayers and fuckboys along the way. She switches up her flow throughout the party-starter and tries out different voices, from her low-end Texan drawl to shouted ad-libs like a one-woman hype crew. (The "I'ma rock that shit" chorus is its own hit parade). "I don't really got no point to prove/ Play that game, you bound to lose," Asian raps, staking her claim to just how unable to be fucked with she truly is.

Canadian R&B futurist Rhye just announced a new piano-based project, called Spirit, and its first single is here. "Needed" is a gorgeously sung and composed song, co-produced with former Semisonic member and Adele co-writer, Dan Wilson. It's rare to hear a song that plainly discloses neediness and makes a listener want to play the role of provided. "I wanna be needed," Rhye's Mike Milosh sings in his silken whisper. "That's what I need." Simple enough, one supposes, but why is that so hard? Milosh keeps things open-ended with an intimate, almost Sade-esque arrangement of claps, strings, and delicate piano. The song's mystery is part of what makes it so alluring — you almost need to hear it again and again to get closer.

Korean-American singer ANE plays with synth-pop and soul on her newest single from upcoming release Lonely Lovers Fantasy, out May 20. There are also some surprise elements of London grime and lounge that break up the straightforward narration. In "It Is What It Is," ANE is efficient, zeroing in on the object of her affection with sweet, but matter-of-fact acceptance. "I've gotta handle my business," she sighs. Same, girl. No shame in going for what you want.

Nigerian-Canadian singer and rapper TOBi first entered our radar earlier this year with his soulful single and video to "City Blues." Now, the artist has gifted us with a full-length, STILL. A highlight is the slow jam, "Sweet Poison," least of all for its sticky "let's get high" hook. ToBi can't believe his luck in finding a "Mona Lisa" among "Cruella de Vil's." To earn his spot in her heart, he's preparing to handle with the care a conscientious student puts into "a final semester." It's a lovelorn bop among a collection of mostly socially conscious records, but hey, scholars need love, too.

Following a few years involved in high-profile label deals, Chicago rapper/singer Tink is back on her independent game with Voicemails. The songs further establish Tink's unique place in the music industry, one hard-earned by experience and a commitment to maintaining a high level of artistic integrity. "Ride It" with DeJ Loaf is an example of how Tink is continuing to move forward, complete with a spacey R&B sound and vocal delivery that feels like a feminist update of Ginuwine's futuristic classic, "Pony." It deviates from her signature drill-based bars and relies more on hooks and melody, but for a fully grown-up artist like Tink, "Ride It" proves she can't be pigeonholed.

K.Flay's "This Baby Don't Cry" is a rock-tinged jock jam from the genre-blurring California-based artist. But what makes this one jump out aside from the party-starting instrumentation, fueled by heavy guitar riffs and handclaps, are the lyrics. "Nobody tells you when you're just a kid, that the rules are changed/ You gotta lose to win," she intones, in her signature chanted-sung vocal style. Sounds like K.Flay is winning her own game, and we're all better for it.