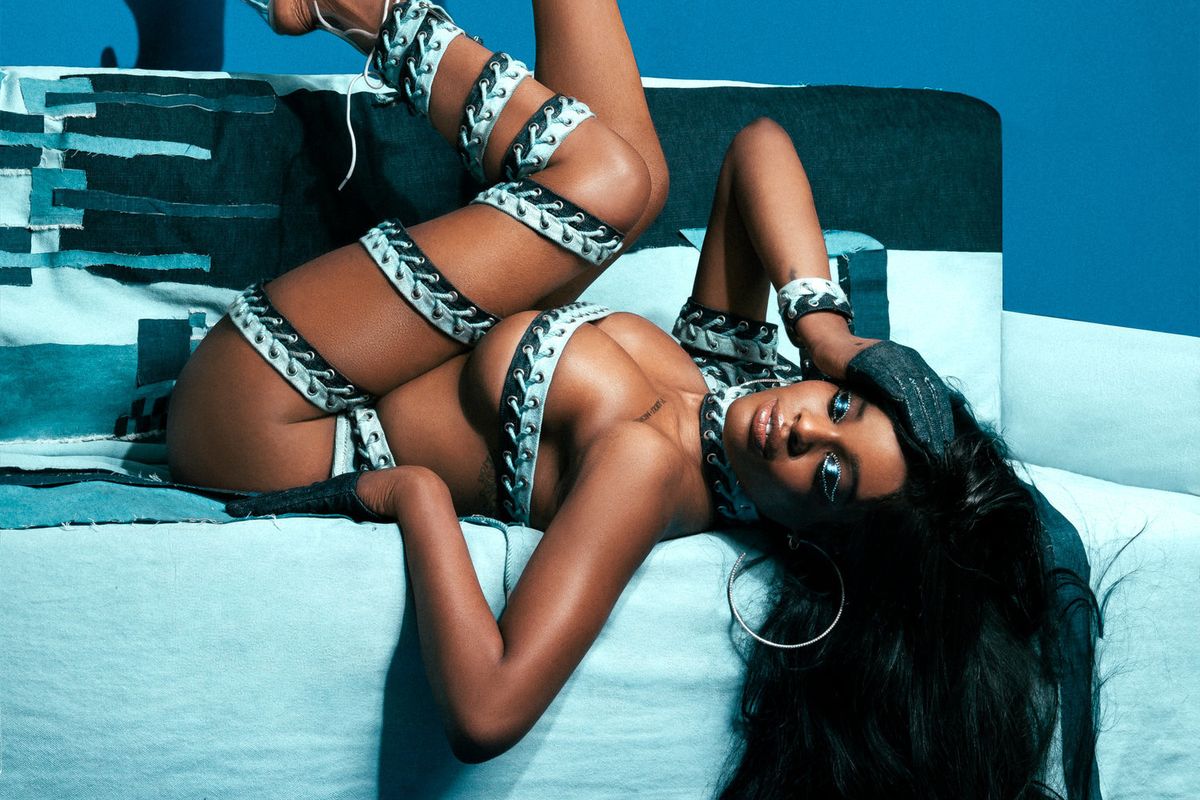 Say whatever you like about the polarizing Azealia Banks: she remains a singular artist with an eclectic and playful sonic palette, who churns out bops like it's the easiest thing in the world to do, no matter what's going on in her public life. New single "Treasure Island" continues in that vein, as part of her campaign leading to her long-awaited Fantasea II album. It's an aquatic bop that fluidly mixes Banks' melodic rapping style with to-die-for R&B vocal runs, with a killer hook (the way she surfs along "twinkles on the watery horizon" like a jazz chanteuse is pure gold). Consider "Treasure Island," for all of its high points, a deep-sea re-discovery of why we all care in the first place: when Azealia Banks has the mic she brings her musical talents center stage. It's impossible to look away when the songs are this good.

Related | Azealia Banks Is an Amazing Singer, Any Questions?

Holland has changed the game as K-pop's first openly gay star, and suitably, he's using his platform to express his truth and uplift the LGBTQ+ community. "I'm Not Afraid" is about him coming into his own as a gay man, cruising along on the buoyancy of a smooth, house-infused EDM beat. The video also came out today, and it's a party of mixed races and gender expression, celebrating inclusion — a rarity in K-pop videos. The anthemic hook is simple, but powerful. "I'm not afraid anymore" feels more important than ever to sing to the cosmos. For those who still hide in shadows, may you find the strength to become fearless. With "I'm Not Afraid," Holland is powerfully giving us all permission to be our best and brightest selves.

Internet teen sensation turned singer-songwriter Clairo is quickly establishing herself as a musician with a knack for crafting addictive pop bops that sound effortless. On "Better," produced with SG Lewis, she also continues to build on her hallmark of honest, confessional songwriting, singing in the chorus, "I wanted better for you." Where Clairo's singing and lyrics embody a feeling of bittersweet melancholy, they are smartly contrasted with an easy vintage disco-inflected groove. Thus, "Better" effectively captures the essence of summer love: breezy, fleeting, but you just can't get enough.

Related | Viral Pop Singer Clairo Was Raised on the Internet

Teddy Geiger, the singer and songwriter-for-hire for acts ranging from Christina Aguilera to King Princess who now goes by "teddy<3," is back with her first piece of new music since coming out as transgender earlier this year. "I Was In a Cult" is both a blast, and an honest expression of her experiences, realizing how social conditioning held her back from openly expressing her trans identity. This verse: "I wasn't someone I could remember/ When it was easy stuck in a corner/Give me a warning I'll be a good boy," packs a powerful punch stacked next to an anthemic chorus proclaiming "I was in a cult." Adding to the thrilling and raw nature of this track are jagged guitar riffs, playful, repetitive piano chords, and surf-rock "oohs and "ahhs." It's exceptionally hard work to make a song this personal sound as much fun as "I Was In a Cult" does. Hat's off to you, Teddy<3.

It's important to call bullshit when you see it. Who has time anymore to deal with it? Rising British pop singer RAYE understands this, and as such, is not here for anyone's nonsense, as she makes abundantly clear in the brilliant, summery pop jam, "Friends." In an age where social media bolsters one's ability to preen and posture for the spotlight, "Friends" cuts straight to the core, calling out in particular, female competition: "What's up with all the 'girl hate girl' shit?" she sings coolly, and then later: "Why is it if I'm not a boy, I'm an enemy?" While RAYE weeds out the snakes on her timeline, we'll be bopping along to the tropical house vibes, enjoying this welcome bit of #relatablecontent.

Meek Mill drops his Legends of the Summer EP today, his first project since being released from prison in April. "Dangerous" is a standout, featuring Jeremih and PnB Rock. It's a nuanced, catchy R&B-infused track that, at first listen, seems to be about getting caught up with a lover whose seductive prowess beat out their flaws, but really, it's about loving an imperfect person. Meek and his cohort take a sobering birds-eye view of the relationships in question, and approach that really works for this song. But looking at it another way, "Dangerous" also transmits the idea that unconditionally loving someone, flaws and all, could be just as self-reflective as it is outwardly focused.

Related | An Afternoon Off with PnB Rock

Olly Alexander, who fronts Years & Years is back today with Palo Santo, his second album since his 2015 release Communion, and it solidifies his position as an important queer voice for this generation. On a highly-cohesive album of many beautifully written pop standouts, it's challenging to pick just one bop, but for the purposes of this list, "Hallelujah" takes the cake. It's one song of several proffering spiritual and sexual allegiance to someone special, complete with all manner of spiritually-minded metaphors. "Hallelujah" is about the alignment that takes place when you've found your match (in more ways than one). The hooky chorus (and Alexander's vocal performance) soars, casting a glow across the record almost feels too good to be true. So if you find your spirit changed while singing along to, dancing to, making love to "Hallelujah," don't say I didn't warn you.

Related | Years & Years Is Ready to Make It In America

Dumblonde, the dynamic duo of Aubrey O'Day and Shannon Bex, is back with "White Hot Lies", but first, let's just talk for two seconds about how inventive they are. Their 2015 self-titled release came post-Danity Kane 3 breakup, which made many headlines, but forgot to mention the creative ingenuity of the members comprising the group. That considered, Dumblonde's self-produced, self-promoted, and self-released first album was nothing short of a giant pop-music feat. In the span of the album's 11 songs, they gave us high-gloss '80s-tinged electro in "Dreamsicle," '90s vogue-circuit house in "You Got Me," sunny reggae-pop in "Remember Me" and so much more. And then the stunning couture visuals! Let me stop. We're here for "White Hot Lies," a playful Halston-era disco bop about wanting to be lied to: "Your white hot lies electrify me," the duo sing in perfect harmony in the chorus. And while we're still here, I also just want everyone to know that Aubs and Shannon write everything, too. "White Hot Lies" continues in their tradition of refreshing, unfettered creativity. As Annie Lennox once sang: "Sisters, they are doin' it for themselves."

Latin Grammy Award-winning Spanish singer and rapper Mala Rodríguez has been in the game for a minute crafting genre-melding, spellbinding hip-hop. Today, she released the song and video for "Gitanas" (meaning "female Spanish gypsies" in this context) from her forthcoming sixth album (her last album was 2013's Bruja, which translates to "witch."), and it's a bop for many reasons: the all-female video makes literal the song's pathos of protest. Over a dizzying carnival loop and trap percussion, Rodríguez sings in Spanish about women banding together, reaching an emotionally-charged apex in the chorus, where she rallies the troops. "¿Dónde están mis gitanas? /Solo ellas saben lo que se cuece aquí" translates to "Where are my gypsies? Only they know what's cooking here." Rodríguez sounds fiercest here, (and I can't help but wonder if this song also doubles as a condemnation against government-sanctioned violence against women, people of color, immigrants) and the repeated question "¿Quién me protege?" is answered by this: "Me, in front."

Norway's Mr Little Jeans (real name: Monica Birkenes) closes out this week's list with "Forgetter," a glitchy, darkly catchy pop banger that illuminates the lyrics, which examine the mental health effects deduced from toxic relationships. It's sung with the detachment an enriched perspective affords. In "Forgetter," Birkenes knows from experience that if you've got broken bones, there's happiness in knowing you survived the fall.