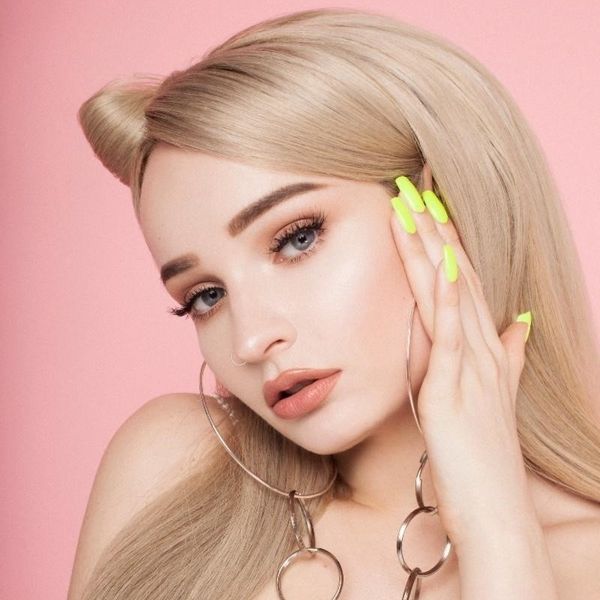 Kim Petras, everyone's new favorite pop star, has done it again. "All the Time" is another slice of magic from the rising star, in that it makes no bones about being an unapologetic pop bop. It's what we've come to know and love about Petras: lyrics showcasing her emotional vulnerability, delivered with effortless cool and verve; sticky melodies for centuries; all-the-way-up-to-10 beats that almost render listeners unconscious with their sugary power. This song is meant to be played (loudly) everyday, all the time.

Jessie Reyez released "Body Count" a few months back, and it served as an effective feminist response to the patriarchal double-standard sexually adventurous women often face. It's gotten a whole new facelift as it were, with the additions of Nicki Minaj-endorsed Normani and Kehlani, who sings memorably in her verse: "I dodge dick for pussy." The song then becomes a more inclusive artistic statement: straight women aren't the only ones who deal with slut-shaming. But if we're on the topic of praising slutdom, we might as well have a blast, which is precisely what the ladies here on "Body Count" are doing. As well they should be!

Justin Tranter co-penned this latest bop from musician Shawn Wasabi, a California 23-year-old with a vibrantly punky aesthetic. "Squeez," for all of its high-fructose content, is an homage to bubblegum pop of yore, but to the max. (Remember those old-school squeeze-bottles of liquid sugar that we knocked down our throats?) That's exactly what the rush of this track is like, and the cutesy adrenaline keeps momentum for a full three-and-a-half minutes, sweetly sung and half-rapped verses from Raychel Jay, choral explosions, and Wasabi's signature: surreal bleeps and bloops that seem pulled directly from arcade games. "Squeeze, til you pop, pop, pop," Jay sings deliriously, as if under a sugar-induced coma. Play it again at your own risk (you'll want to.)

Dev Hynes drops his latest album as Blood Orange, Negro Swan today, which is already garnering acclaim for its probing look into black consciousness, specifically queer, black depression and mental health. The album on the whole, then, is also a musical mood piece, with a range of collaborations such as Diddy, Tei Shi, ASAP Rocky, and Project Pat, colored in shadows and jazzy atmosphere that demand closer listening. "Saint," one of the album's introductory tracks, helps to establish the album's tenor, while also just being an outright jam. It begins with sparse organ and ethereal harmonies before morphing into a heavily percussive beat recalling early Jimmy Jam and Terry Lewis productions, allowing Hynes' soulful voice plenty of space to croon catchy melodies and lyrics about finding his north star.

Los Angeles-based rising singer-songwriter Lauren Sanderson makes irresistible pop tunes that sound so free, you'd never know she originally came from Indiana, a decidedly more conservative background. Her debut EP, Don't Panic! is out today, and it moves with such ease between genres from hip-hop to electro to reggae, you can almost imagine Sanderson, who plays within the pop world, exhaling. Electrifying standout "Electric" feels, thus, like a breath of fresh air, borrowing from reggae rhythms to create an open-hearted, breezy tune about getting swept away with new love. Sanderson sells this with a chorus that you won't soon forget, and a voice that is, after years of finding her way, distinctly her own.

Christine and the Queens needs no introduction from me at this point. On the heels of new album Chris, out September 21, she has released a string of singles to promote it and literally all of them ("Girlfriend," "Doesn't Matter," the French versions of both, and "5 Dollars") have been incredible, spinning desire, sexuality, existential meaning, and gender fluidity into heartrending pop confections that sound effortless, a skill that the French are unquestionably great at doing. Today's "La Marcheuse" (the French/international version of Chris track, "The Walker") is equally excellent, fusing radio-ready beats with Chris' reliably strong vocals. You don't have to understand a lick of French to know and feel how emotionally resonant "La Marcheuse" is.

On Marauder, out today, iconic New York band Interpol push the boundaries of their bombastic rock sound from the rafters to the sky. The result of turning up the guitars, drums, and lead singer Paul Banks' emotive vocals all the way makes this album feel almost tailor-made for stadiums and world tours, meant to be enjoyed by all who simply love a good (sonic) show. "Party's Over" is one of many standouts, with a skittering drumline and jangling guitar line that will make you want to jump to your feet, whether the party's over or not.

Swedish-Gambian recording artist Seinabo Sey once released a horn-filled feminist bop for the ages called "I Owe You Nothing," which was my personal introduction to her idiosyncratic musical style and self-empowerment ethos. Today, Sey drops "Good In You," which finds her making the first move, charmingly asking for a moment of her admirer's time. It's a delightful, upbeat track punctuated by pep-rally percussion, faded horn sampling, and a xylophone, adding ever more sweetness to a lovelorn song that goes down like a spoonful of refined sugar.

Chicago rapper Kami releases his new single "Reboot" today, his first since his debut album, last year's Just Like the Movies. It feels like a homecoming for the genre-defying musician, who deftly blends ear-catching elements of electronic and pop into his fiery, bombastic flows, not to mention the collaboration with fellow Chi-town icons, Joey Purp (with whom he has project under the name Leather Corduroys), Chance the Rapper, and Smoko Ono. "Reboot," for all its high, infectious energy may bring Kami's name further into public consciousness, but it's also the confident sort of song someone makes when the best is yet to come.

Jess Connelly is a much-needed new voice on the music scene. The Manila singer's recently-released debut mixtape JCON is a fully realized vision of R&B's softness, sensuality, and genre-blurring inclinations. Single "Call Me" casts Connelly as an emotionally available sweetie, ready to take the call from her lovers, her friends, her listeners, and you. You'd be stupid to not dial her number.