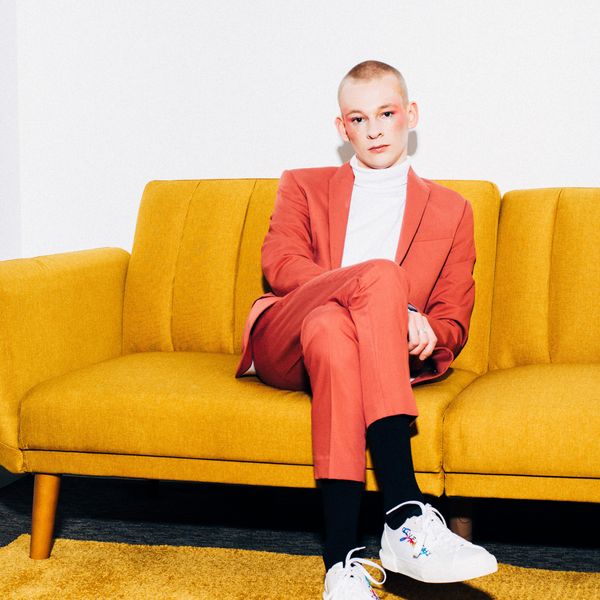 Boniface Is Finding Themselves

Youth is a romantic time. Everything feels so fresh, so new, like nothing has ever happened to anyone in world like how it's happening to you. Youth is also an awkward time. It's riddled with missteps, words we later regret, and trying to grow up without really knowing what that means.

We find comfort in coming-of-age stories. They bring us back to a simpler time in our lives where we had less responsibilities and the world felt full of potential. They remind us that we aren't alone and reaffirm who we are, even if we had no clue at the time. Canadian singer/songwriter Micah Visser's debut album as Boniface is one such story.

Taking their name from the small Winnipeg suburb of Saint Boniface where they grew up, Visser's new self-titled project, Boniface, is a collection of snapshots from their youth. Stories about love, heartbreak, identity and leaving home are wrapped up in a synth-kissed pop-rock package delivered with electric earnestness.

The album unfolds like a series of cinematic vignettes, from the shaking hands and nights getting high on the floor of a friend in "Ghosts" to cleaning out a 7-Eleven and the cigarette-stained walls of "Fumbling." Confessional lyrics blend with sweeping choruses and an almost giddy energy.

Midway through the album is "Your List,"a soft spoken piano ballad laden with nostalgia and bittersweet memories of a love fading away. Visser sings, "I wish you wouldn't call me a man/ Was kind of trying out they or them" — a simple and startlingly straightforward lyric, which the whole project seems to shift center on.

With their debut album as Boniface out now on Transgressive Records and a newly announced tour supporting Stealing Sheep this spring, PAPER caught up with Visser to talk about Winnipeg's music scene, identity and what they hope people get out of the album.

Since your album centers on coming-of-age and suburban ennui, it might be fitting to start off with what the town you grew up in was like?

Winnipeg is quite small. It feels like a small town. Saint Boniface, my neighborhood, it's... there's a lot of parks, a lot of space to walk around. I would walk and think a lot, which kept me really regulated. Winnipeg has a really cool music and arts scene. There's a lot of people doing really creative, exciting and different work. In high school, I discovered these warehouse shows and these small shows. I thought these bands were so cool because they were doing things that were completely different from what I was seeing in the mainstream. I fell in love with these shows and wanted to do that. It was really special for me to be a part of it.

"Growing up, there were a lot of times I felt uncomfortable with the expectation of being a boy."

What is the music scene like in Winnipeg? What was your first show?

The first show I ever went to was a band called Animal Teeth, and they were playing at the Frame Arts warehouse. I had to finish the first practice with a band of people that I didn't really know yet, and they took me to this show and it just completely blew my mind. I felt really connected with people playing the music and the people who took me there. Something changed that night. I realized how powerful music could be and how connected it could make you feel. I think it's a little corny but also completely true.

What kind of crowd did you run with in high school?

I was so lucky in high school because I found a group that really got me in 11th grade. I met these people who thought about music the way that I did. The first two years I spent a lot of time by myself. I had people that I was friends with, but I felt like I wasn't really connecting with anybody, and that was quite hard. That's probably why I loved music, because it was an outlet where I could just write and be on my own, but do something that made me feel happy.

Do you remember the first time you fell in love?

I think the first time I thought I was in love, I wasn't really in love. Love is such a vast thing. What comes to mind when I think of the first time I fell in love, I think about this group of people in 11th grade, again, that took me to these shows, these warehouses, that I played in bands in with. That introduced me to this whole world of art and self-expression that I didn't know was possible. That saved me. That's really the first time I fell in love. There's the first relationship that I write about too, where you say, "I love you," and it's special, but I feel like that's a different kind of love.

How did you come to identify as nonbinary?

Growing up, there were a lot of times I felt uncomfortable with the expectation of being a boy. I felt like people had a lot of expectations right off the bat when I met them that weren't true to me. That ended up making me feel isolated, like I was failing a bunch of tests that people had for me right away. At the time, I didn't really know that you could identify as nonbinary. I didn't even know that was a thing. I didn't understand the spectrum. I didn't understand the fluidity of gender. I knew that I wasn't a boy, I knew that I was somewhere in the middle. Now through my music, a place where I've always forced myself to be as honest as possible, I realized that it's important for me to be honest in every part of my life. It's still scary and something I'm figuring out, but it's been very liberating.

Did you notice a change in yourself after you came to that realization?

I feel a lot more excited about things. With each [single] release, I've slowly been pushing myself to be a little more honest and open. I feel like I'm at a point where I'm being open with my pronouns, being less scared. I've been scared of this for a long time. I've been scared to be vulnerable and open with the project. But it's a pretty vulnerable and open place that I'm in.

"Music is the one thing I've been able to get right from the beginning."

You mentioned earlier that you recently came out to your family. What was that like?

My mom understands. She has her pronouns on Twitter now! She's very encouraging. It was my brother who I came out to first. He was also extremely encouraging. I think I was afraid it would change the way people acted around me or the way people thought about me. It hasn't been that at all for me, and I think I've just been really lucky. Everybody's using my pronouns and generally using less gendered language, which I really appreciate. Also the band, that I was another thing I was unsure about. We just have such a good relationship, all of us. I was scared that it would change it, but I told them, and they just changed the pronouns, and it was all good.

Did coming to terms with your identity impact the way you approached music?

I really feel like the music is the one thing that hasn't changed. Music is the one thing I've been able to get right from the beginning. It's the one place where I've really been able to be honest. It's something anybody who has listened to my music would probably pick up on, because it's the one place where I've been completely raw. To be honest, I think the music has empowered me in my life outside of it. I don't think the way that I write is going to change because the way I write is the thing that's been true and giving me the courage to live every other part of my life.

What moments on the album are you most excited for people to hear?

I'm really excited for people to hear the quieter moments on the record because since we have started putting out music. So far it's just been singles that are more uptempo where you're maybe trying to put the emphasis on having a fun song. I think the opening track and the closing track especially. I'm excited for people to hear the moments on the record that aren't singles and that aren't pop as much.

What do you hope comes across for people on the album as a whole?

I wrote about love a lot, wrote about identity a lot, and I hope that what comes across is that things are okay, you're doing good. I'm a super, super anxious person and I had a lot of anxiety, and I had a lot of trouble with that. I found myself gravitating towards music that makes me feel comforted. I'd love, love, love if the music could make people feel comforted and accepted, somehow — just like, "You're doing fine." There's a lot of tenderness on the record. Tenderness is such a great thing, I think it makes people better when they're able to be patient with each other and with themselves. I want that positivity and to spread that in any way that I can. I hope the album is able to do that.