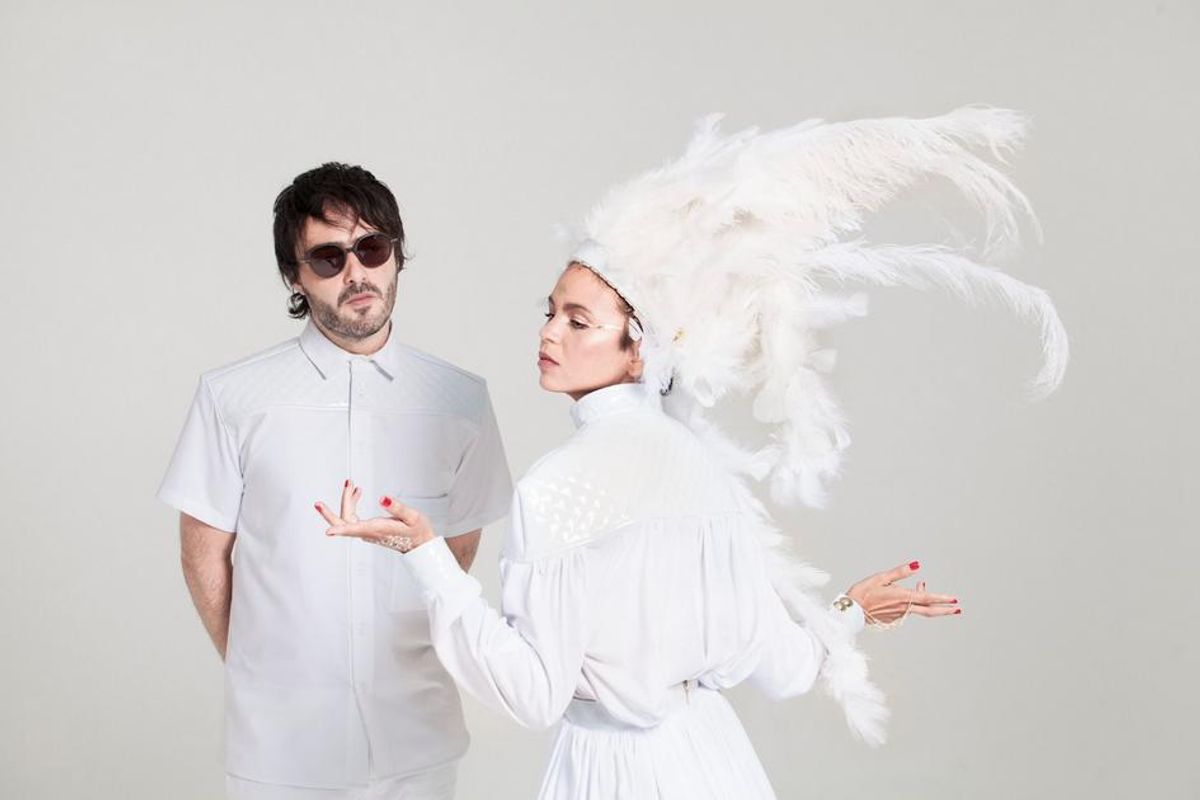 For the last 10 years, Bomba Estéreo's Liliana Saumet and Simón Mejía have been cultural innovators, creating catchy, layered dance tracks packed with myriad references and influences. Their fusion of traditional Colombian, hip-hop, and African sounds with electronic beats not only reflects the narratives of listeners across the globe who similarly come from multiple backgrounds, but also features African and Indigenous sounds, which are often ignored or seen as inferior to Western sounds. The band's latest video for the song "Soy Yo" off the 2015 album Amanecer, similarly pairs a complicated sense of identity with infectious optimism.

We watch 11-year-old actress Sarai Isaura Gonzalez leave the salon with a fabulous new haircut and casually shut down raised eyebrows and dubious onlookers in her neighborhood, with her recorder-playing skills and her dance moves.

The video, which has been lauded as an anthem to brown girls, shows that the joys of childhood are not always divorced from the experience of being brown. More than anything, the viewer is shown that there is no reason to not be proud of their quirks. We caught up with Bomba Estéreo's founder, Simón Mejía, to talk about the video and the global appeal of personal narratives.

I really enjoyed your music video for "Soy Yo." Why did you choose to feature a child rather than an adult in your video?

Basically, we pitched this song to the director, who is a Danish director [Torben Kjelstrup], and he came up with the idea. We talked to him about what the lyrics were about, but we didn't mention any particular idea. He came up with this very simple idea about a girl who is obviously an immigrant, a Latin girl, who is surviving in the streets, putting her personality in front of everything. We thought it was a really cool idea and a perfect fit for the music, and we let him do whatever he wanted to do with the song.

Do you think that children have a unique perspective on issues of race and immigration and discrimination?

I think the most special thing about kids is that they are themselves without any limits. The limits are put on kids when they grow up and when they start becoming part of a society that is not so well constructed. But the special thing about the girl in this video is that she is just being herself. And kids just do that unconsciously. They are themselves until a particular timing in their growing process that they become more aware of the world, their society, the people around them. That should be a lesson to the world. You have to try to be yourself and make your life in the world just being yourself, and trying not to listen and be so aware of what everyone else is thinking.

You're very innovative blurring boundaries and finding ways to mix Colombian music with electronic music. How do you navigate your position and your art as distinctly Colombian but also part of a global setting?

We live in a globalized world that tries to homogenize everything. Everyone has the same phone, and everyone listens to the same type music. And being part of that globalization, what you become aware of is [the power of] your local flavors, and where you come from, especially a place that is as strong as Colombia or Latin America. We have some very deep roots that come from Africa and the Indigenous world and come from the white world also. We try to go deeper and deeper into those roots and try to be inspired by those roots. [Our roots make us] different in this homogenized world. The more local you are today, the more global you can be.

What do you think makes a great music video?

And I think that happened with this particular video, [which added] expression to the song. The music plus the video became a new artistic piece. And that's vey powerful, and that's what I love about music videos.

It kind of relates to what you were saying earlier about portraying your specific narrative or your local idea and that helps you succeed globally too. A lot of different people globally really resonated with the very specific story in the video.

Yeah, and we didn't expect it! Actually when we were talking about the theme, we thought "It would be cool if you guys shoot the video in Denmark or something to have a different vibe. This is Colombian music, but it would be cool to have a whole different ambient or something." And [Kjelstrup] was like, "No, I want to shoot it in New York with this particular girl." And we said "Ok, go ahead.", and he went ahead with the idea and the reaction of having that situation has been very strong. It is very strong how people are reacting to that video, because it's made here with that girl, she's a Latin girl, with her father and everything. I think that's very beautiful and powerful.

It's transcending any one reading.

Everyone sees a different perspective. I like that. There are also people who hate it. I try not to get too much into that, but there are people who don't like it also, and that's perfect.

It's sparking conversation! Could you see the character appearing again in a video?

I don't know, but what I'm very happy about is that I'm meeting the girl here in New York as I'm here for a few days. We're meeting and doing a couple of interviews together. I'm bringing my kids also, so I think it's going to be a beautiful experience.

You're currently in the middle of a tour- What are your favorite parts of touring?

I love that at every concert you play a similar play list, we're kind of repeating the same show, but at every concert the [crowd] surprises you in a different way, and that's really amazing. You sometimes come to a concert tired like, "I don't want to play the same songs, I'm tired, I'm sleepy." And you go to the stage and people react always in so many different ways and that's beautiful, and that's what keeps us playing live- the reaction from the people.

What are you looking forward to?

Obviously, making another album and everything. Next year we're releasing a new album. All the normal stuff. But besides that, we're bringing forward lots of cultural projects in Colombia. We're making a music festival on the beach in Colombia, we're also making a music documentary next year, and especially in Colombia we're in the process of signing a peace treaty ending 50 years of war, so what's coming next in the country is that artists will have to be very bold to improve the conditions, so we're set towards working a lot in Colombia and playing in places we never played before because the war didn't let that happen, so I think good times are coming for Colombia and we're looking forward to it.