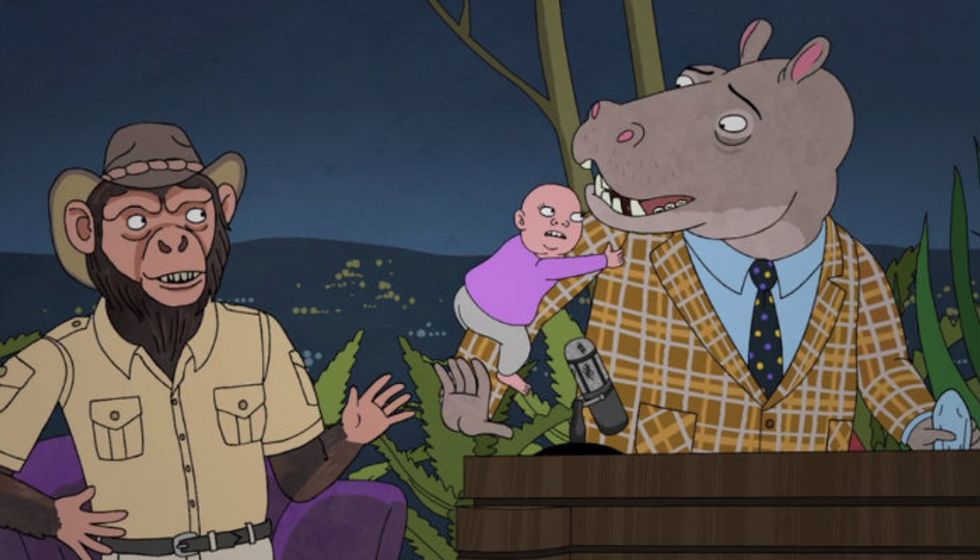 by Eric Thurm
PAPERMAG
The second season of BoJack Horseman, which premiered on Netflix last Friday, is maybe the best string of episodes the streaming service has ever hosted. The show, which stars Will Arnett is an alcoholic, deeply depressed anthropomorphic horse who used to star in a successful (if hacky) sitcom, is, in sharp contrast to its bizarre premise and surreal, colorful background, one of the most richly emotional and deeply human things on the air (or online) at the moment. Its cast is dynamite -- in addition to Arnett, the regulars include Alison Brie, Aaron Paul, Paul F. Tompkins, and Amy Sedaris, all of whom refuse to coast just because they're voicing weirdo characters on an animated show. And the show's world allows for ridiculously obvious, still-effective satire (a runner connecting improv groups to Scientology is fantastic). This is most apparent in seventh episode "Hank After Dark," which roughly tracks over the country's response to the allegations against Bill Cosby.
BuzzFeed has a summary of the way "Hank After Dark" looks at generalized allegations, including against David Letterman, but to explain the plot: BoJack's friend/former love interest/ghostwriter Diane (Brie) calls out the long, rich history of men in Hollywood taking advantage of women and engaging in reprehensible behavior, throwing out a list of names that only glancingly includes late-night host Hank Hippopopolis. After the incident leads people to discover long-standing allegations against the hippo by his assistants (in a manner reminiscent of Hannibal Buress simply calling attention to the accusations against Cosby), Diane becomes the center of attention on BoJack's book tour.
The jokes throughout this episode are excellent, including a ticket on news network MSNBSea (with a whale of a host voiced by Keith Olbermann). But the sadder, more heartfelt part of "Hank After Dark" is the way it captures the attention economy that allows people like Letterman, Cosby, Hank Hippopopolis, Mike Tyson, Woody Allen, Sean Penn, Josh Brolin, and many, many more to continue taking advantage of women and, correctly, assuming few people, if anyone, will care -- at least until public pressure reaches a fever pitch and the culprit (maybe) confesses.
During the course of her (admittedly somewhat myopic) crusade, Diane first attempts to present her case to people, without actually doing much other than pointing out information that had been publicly available for years -- it was just that no one cared. (Also, networks probably did a good job of hiding it.) Then, she goes to a magazine (named Manatee Fair, naturally), which kills a story on Hippopolis because it's owned by the same corporation that runs the network airing the star's dancing reality show. "People don't want to hear these kinds of stories," Diane is told, and it's sadly true.
The case of Cosby might provide some legitimate grounds for optimism -- he was one of the most powerful, successful men in Hollywood, and now it draws applause when Lena Dunham publicly admits to not having seen his show and considers the man as "just a rapist." But the circus surrounding the Cosby allegations, and the fact that even after dozens of women came forward, there were still some defenders, makes the episode's ending -- in which the media moves on to cover Kanye's West distaste for Thin Mints -- all too believable. By the time you get to that moment, you might have forgotten that Diane is never given an opportunity to actually reveal to the audience what Hippopopolis has actually been accused of. It doesn't matter. Nothing bad is going to happen to him anyway. He's "Uncle Hank."
If anything, BoJack Horseman itself is the best case for optimism in dealing with structural incentives for harassment to go unreported. If something so horrible can be approached in such a scathing, funny, and poignant manner, maybe more people will start paying attention.
You May Also Like
Art