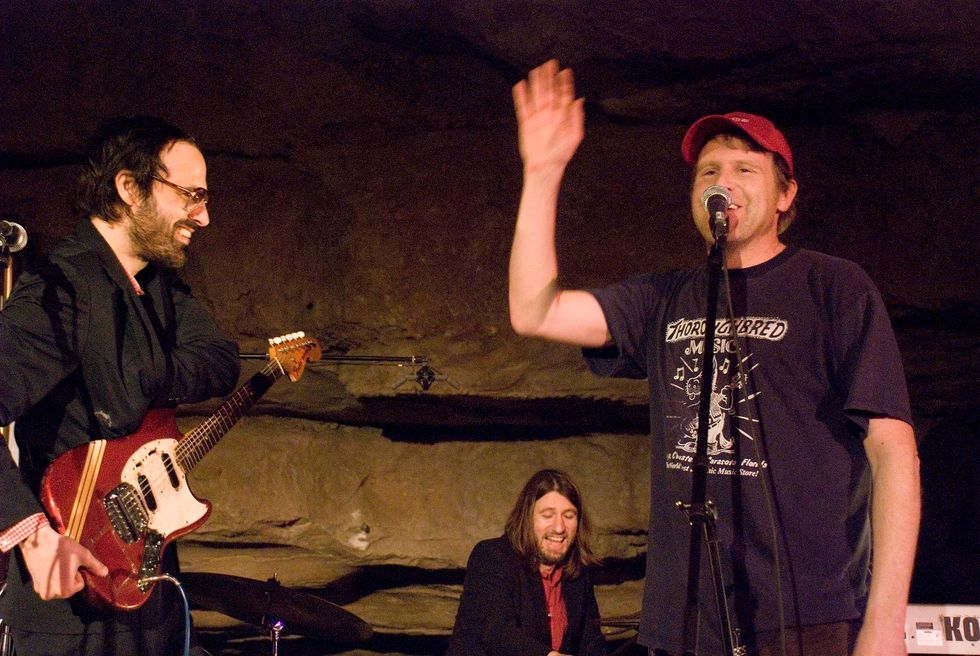 Pavement and Silver Jews were two towering titans of the fertile 1990s indie-rock scene. Featuring Stephen Malkmus' inventive guitar-playing and cryptic lyrics, Pavement released a string of five classic LPs, and disbanded in 1999 (only to reunite in 2010 for a successful reunion/world tour). The country-tinged Silver Jews, led by publicity shy poet-singer-songwriter David Berman, remained elusive throughout the '90s and didn't embark on their first tour until 2006. After releasing a handful of brilliant albums, including 1996's The Natural Bridge and 1998's American Water, Berman retired the band after playing one final gig 300 feet below ground in Tennessee's Cumberland Caverns. Despite their stylistic differences, Silver Jews and Pavement shared several common threads, one of them being percussionist Bob Nastanovich.

Nastanovich, who currently works in Altoona, Iowa, in the horse-racing industry, is one of PAPERMAG's favorite interview subjects. Last week, Early Times, a compilation of Silver Jews' first and long out-of-print recordings, arrived in stores. The extremely lo-fi LP provides a brief glimpse of the masterful songwriters Berman and Malkmus would go on to become; but more interestingly, it shows a snapshot of three guys --  Berman, Malkmus and Nastanovich - making a drunken racket in a Hoboken living room in their early 20s, just before music fans around the world had their eyes and ears on them. On the occasion of this new release, Nastanovich, a hilarious storyteller, talked to PAPERMAG about Silver Jews' early times, finding money on the street and his fractured friendship with David Berman.

How's it going? Are you in New York right now?

Yep. Oh yeah. Oh well. There used to be an OTB there.

I actually live in the building above where the OTB used to be.

Then I really know where you are. One time in Williamsburg, when [Pavement drummer] Steve West lived in a loft on North 11th, back when it used to be all warehouse-y and stuff, there were hookers who would advertise their wares on the corner overnight there. And one morning, I went out to get us some bagels, and there was a $100 bill sitting there in a puddle. And I went straight to the OTB and lost it. I got rid of it in about 45 minutes. That's one of the few times in my life I've ever found a hundred. Have you ever found a hundred?

Yeah. The key to finding money is to have really bad posture and keep your head down. I found $100 once in Charlottesville, then a hooker dropped one and I took it downstairs from you in Greenpoint. Does it smell like urine in your apartment? That OTB had to have the most colostomy bags of any OTB in New York.

It was pretty gross, but the stench is gone. I like playing the ponies, but I was glad to see it go.

Those OTBs draw some pretty unsavory characters. One time I was in that Greenpoint OTB and I met a guy who got the front of his face kicked off by a horse. He was a former horse exerciser. That's something you don't forget: meeting a five-foot-tall, 100-pound man with no nose, and he's screaming at the TVs. I actually went to that OTB before they had TVs. They just had a radio in the ceiling broadcasting the races. Anyway, this is a fun conversation to have at 10 in the morning. 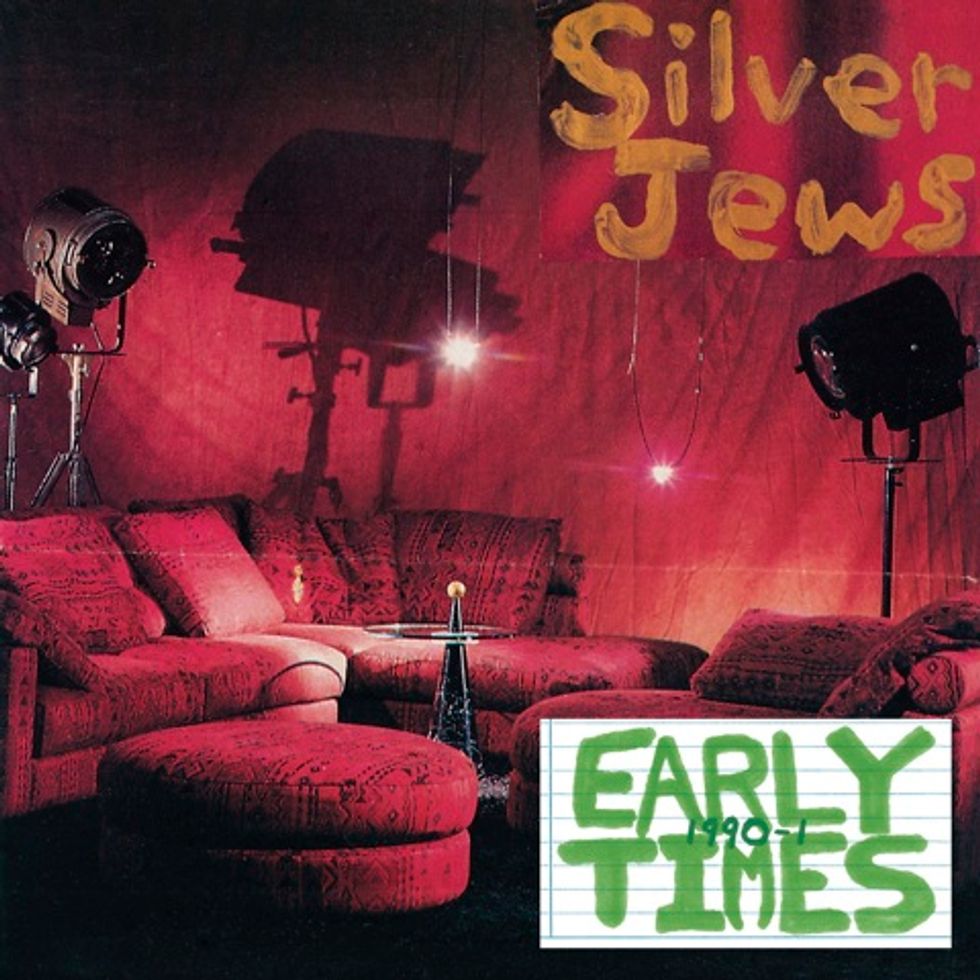 Let's get into the Silver Jews questions. Listening to this reissue, twenty years
after it was recorded, what emotions and memories does it bring up for you?

It reminds you of what the latter part of your childhood was like. We were having a really, really good time. I got those two guys [David Berman and Stephen Malkmus] to move to North Jersey and we were all working in New York. We were all completely single and totally independent. Just as a trio, in varying degrees, we were a rambling wreck. We wanted to be cool, and we wanted to be in a band. And, you know, there was some talent there. And there was also the thing with rudimentary recording equipment, which for some reason was cool, thanks to Daniel Johnston and people like that, so you could get away with murder. But we never thought anything would come of it. We were just getting messed up and were trying to make up songs, which was what Malkmus started to do all the time. And then David started to do it too, because he wanted to be a rock star. And I was the guy that sort of brought them together. They weren't natural friends.

Were the three of you living in the same apartment?

At times. At first we all lived in this apartment in Jersey City Heights across from Palisades Park. You could hear the crunch of crack vials as you walked across that park at night. It was pretty harsh. The only bar we went to was this really intense, full-on Mexican bar that was three doors down from our house. So we got antsy and moved down the hill to Willow Avenue in Hoboken. We lived in this really crappy basement apartment. We'd jam in there. David lived there for a period of time, Stephen would stay in there quite often. Then David actually moved out to Greenpoint, where you are now. Is that liquor store still there, the Vodka King?

There are about five liquor stores on my block, but none of them are called the Vodka King.

David lived down by the East River. But Jersey was where this era of Silver Jews happened. Mostly in the apartment in Hoboken. It was a great place to jam. The ceiling was always on the verge of caving in. There was a large Puerto Rican family on the first floor who'd stay up late partying, which created the perfect symbiotic relationship with us, because we could do whatever we wanted. None of this could have happened if it wasn't for that Puerto Rican family who'd party around the clock and let us do whatever we wanted. We'd put a tape recorder on top of the television, and Malkmus and Berman would physically jockey for position to get closer to the recorder, and I'd play percussion.

You mentioned that you guys like to get messed up when you were jamming. What was the drink of choice back then?

Beer. Cheap beer. In a bottle. Cases of beer. I'd have to say that Bud was probably
near the top of the list.

Malkmus and Berman trade vocals on a lot of these songs, but I often hear a third voice chiming in. Is that you?

I sang some on "Walnut Falcon." Those guys are good at what they do, even though it doesn't really sound like it on this record. David's a top-notch lyricist, but in our fractured state of mind, I might have blathered a lyric that got on there. I had a metal ashtray on a stand. I'd hit that. There were pots and buckets around. I don't remember there being an actual drum.

Berman's not doing press for this LP, so I'm curious: Who was the catalyst on getting this reissue released?

I have no idea. I imagine it's some combination of David and Drag City. If David does press, he prefers to do it over the Internet, so he can come up with clever answers. He doesn't like to do oral interviews because once or twice in his life I'm sure he's put his foot in his mouth and said something he didn't mean to say. And that's how he learns his lessons, by making mistakes and then not doing it again. But I don't know. It might have to do with his cell phone plan and him not wanting to pay for overage minutes. It's just him being cryptic. That's what we're dealing with. Or in your case, not dealing with.

I mean, I got fired from Silver Jews. Stephen got kicked out of Silver Jews before the Natural Bridge album, too. [Berman] made that album without bothering to tell us, you know, the guys he started the band with. That was odd. I mean, I didn't really care. It had to do with him separating himself from Pavement, and I understand that. But Pavement and Silver Jews are totally different bands. The only commonality is Malkmus. He preferred to be in the lead guitar position in that band, and if there was ever a lyric he was excited about, he might chime in with David. I always thought he was a valuable asset to that band.

And you, too. You're a thread that runs through both Pavement and Silver Jews.

In the sense that I provided the environment for us to hang out and do stuff that degenerate 20-something guys do. I mean, my drumming skills are so rudimentary. If there's a track on this Early Times record where there's no percussion, that's because I was probably getting beers from the fridge or a beer has spilled and I'm cleaning it up, or I'm just taking a slug of mine. You know when you hear a record and you're like, "These guys must be really messed up," but then you find out they're straight-edge? Well, with the Silver Jews, on any thing that I played on, the performers were really messed up.

Do you know if there are other future Silver Jews releases in the pipeline?

No. I've been out of the Silver Jews loop since 1994 or 1995. Almost 20 years now. I tour managed Silver Jews for one month in the States [in 2006]. I wasn't quite sure why David hired me at the time, other than that he knew that my jockey agent career ended and I was looking for work. So he got me out on tour, and I developed a lot of camaraderie with his bandmates. A lot of them are good friends of mine. And he very angrily and aggressively fired me at the end of that tour because he said that I was creating a tour environment that was a lot like Pavement's. And I was doing a lot of work. I can be a difficult person to be around when I get irritable and cranky about being overworked. But I did a good job and a thorough job. I didn't talk to him for about a year after that. I made sure he paid me. I'm pretty sure there was permanent damage done to a lifelong friendship. Again, I'm not sure why this [Early Times LP] is being re-released. I'm sure a number of people have asked Drag City about buying it, and it's been out of print. So if they sell a few hundred copies of the reissue, that would be fantastic.

Stephen Malkmus On The Jicks' New Album, Katy Perry and the NBA Finals