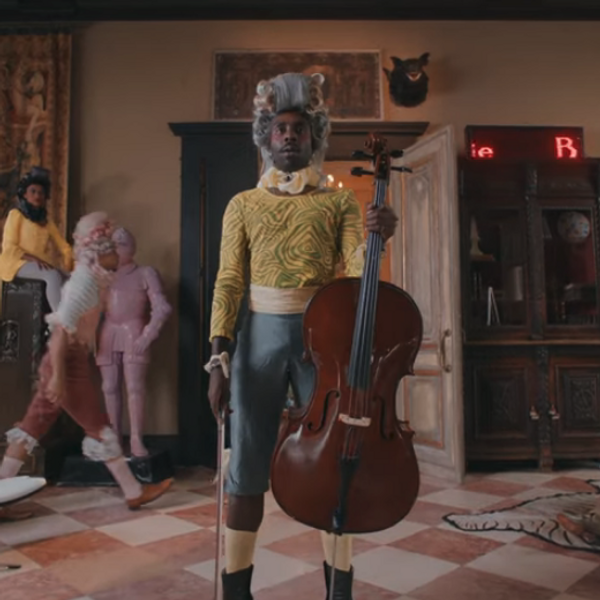 Blood Orange, aka Dev Hynes, bursts into a Victorian style salon with a cello in his new self-directed music video for "Benzo." The song is off his newly released mixtape Angel's Pulse, which features friends and collaborators like Tinashe, Justin Skye, Kelsey Lu and Ian Isiah.

Like the mixtape, which Hynes calls an "epilogue" to Negro Swan, it's one big party for him and his friends. Ian Isaiah, who stars as a queen dressed to rival Mary Antoinette, summons Hynes to come perform for him and a clique of aristocrats. The cohort enjoy some bacchanalia, while Blood Orange grooves in pantaloons to his own experimental R&B.

The camera spends time with each character: woman in a yellow dress next to a baby pink painted knight, three friends giggling on a couch, a man resting his head on Isiah's lap, a couple getting steamy on the piano, and a woman dancing on ballet pointe. Aesthetically, it's a gorgeous subversion reminiscent of the effect of Jay Z and Beyoncé's "APES**T" video, which filled the Louvre with Black excellence.

Blood Orange is set to go on tour later this year with Tyler, the Creator and his recent album IGOR.