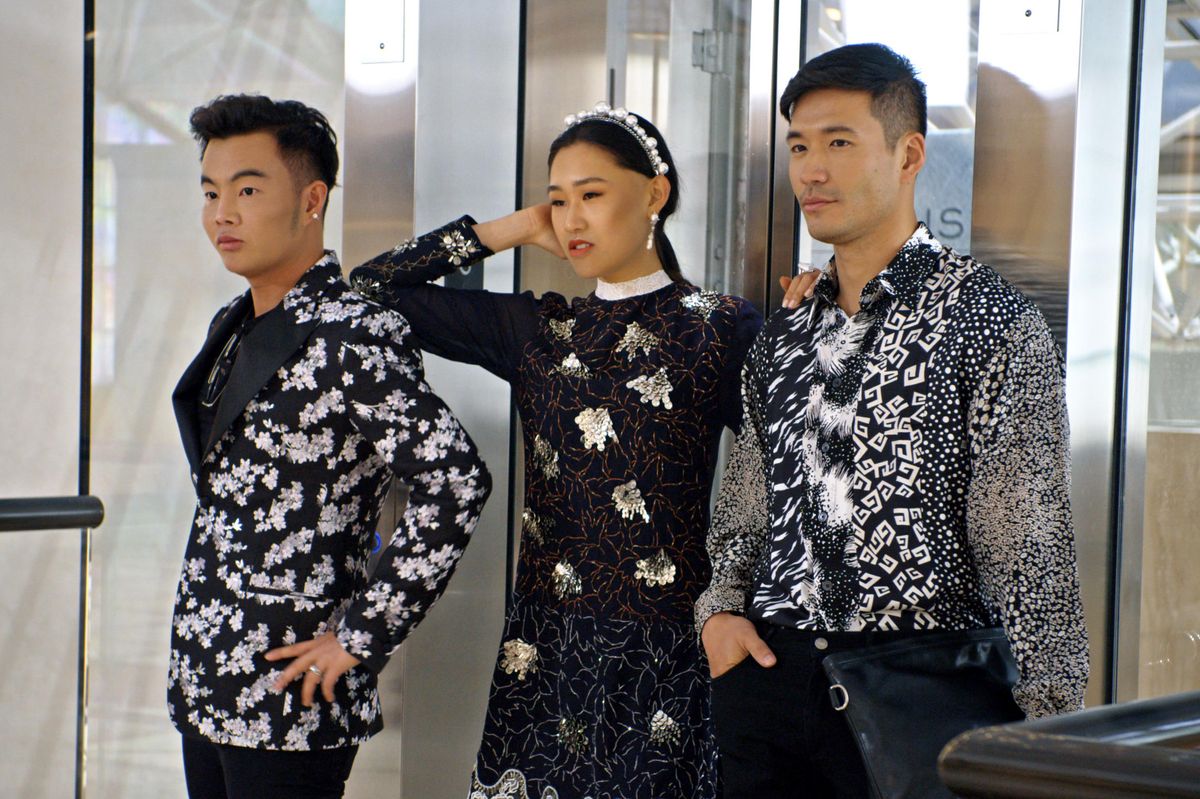 On the surface, Netflix's new reality show Bling Empire is all about the wealthy and envious lives of Beverly Hills' Asian elite. And while that description alone is enough to warrant anyone to tune in, it's also the conversations around infertility, adoption, identity and family that have gotten millions of viewers hooked.

But for fashion lovers like myself, the eight-episode series is also an escape into the glitzy and exclusive world of haute luxury through the lens of people that can actually afford it. With closets that would put any Real Housewives cast member to shame, we see the cast going on private shopping trips across the world without any notion of budgeting or spending limits.

The wardrobes read like a Fashion Week itinerary in Milan and Paris: Fendi, Gucci, Hermès, Louis Vuitton, Dior — even jewelry brands like Piaget, Van Cleef & Arpels and Boucheron get name-dropped like crazy. The fashion references don't stop there, however, with several scenes portraying just how important the role of designer goods plays in everyone's lives. Here, we rounded up nine of the wildest and craziest fashion moments from Season One of Bling Empire. Watch out for spoilers!

We don't get to see a TON of Jamie Xie, the youngest cast member of the group. But when we do, she's always serving up high glam at everywhere from the pool to the club. The daughter of cybersecurity/tech billionaire Ken Xie, Jamie's wardrobe is matched by no one except maybe Christine's. So it was a treat to watch the campfire scene where she tells a literal shaman that she had trouble picking between a nude or mist-colored Bottega Veneta clutch bag in response to his prompt about being indecisive in life. Honestly, same.

Never has Maria Grazia Chiuri's Dior seen so much airtime! All jokes aside, the luxury brand was arguably the 9th main character in the series, with an entire episode seemingly dedicated to Dior-gate. Was Anna Shay gifting unfashionable Kevin an entire rack of Dior a test or was it just a nice gesture? Was Christine low-key shading Anna for wearing Dior ready-to-wear and not couture? Let's not forget Cherie literally naming her baby JADORE, no doubt a nod the famous J'adore Dior fragrance. I need more Dior drama in Season 2, please.

The Designer Clothes on All Those Infants

Baby Gap is SHOOK. I obviously know rich people like to dress their infants in expensive clothes, but seeing it at the magnitude of what Bling Empire showed us was a rather disorienting experience, to say the least. Christine and Cherie's adorable little ones, whose net worths are already undoubtedly bigger than anything I will see in my lifetime, were decked out in everything from Gucci to Versace. Imagine the toys they get!

Anna and Christine Beefing Over Jewelry

In what is perhaps the peak example of "rich people problems," the tension between Christine and Anna seems to escalate over... a Louis Vuitton high jewelry necklace. (For the uninitiated, high jewelry lines are the most expensive, exclusive and rarest jewelry categories certain brands offer.) Christine's penchant for flaunting and showing off does not sit will with Anna, who apparently already owns the necklace in question herself. The two even butt heads over whether Boucheron or Mellerio is the oldest jewelry house. (Christine was right it seems; it's Mellerio, which was founded in 1613.)

If the cast's obsession with Dolce & Gabbana are any indication, the brand seems to be resonating with at least certain groups of Asian shoppers again despite its much publicized controversy with China after that 2018 commercial. The show, whose casts members hail from China, Vietnam, Singapore and Japan, sees almost everyone donning Dolce gear at parties, including the brand's signature gilded crowns. Christine even references Dolce & Gabbana Alta Satoria, the label's lavish couture division that caters to the 1%.

In the chaotic scene where Christine, Kane and Kevin board a private jet to go to Vegas, the three pass the time with a little game of ABC's, fashion edition. 'A' is for Armani, 'B' is for Balenciaga ("Not Boss, it's a lower line" quips Christine) and 'C' is for Canali... so far so good. When they get to 'E', Kevin blurts out Hermès, much to the horror of Christine's nanny and people with a basic knowledge of designer brands everywhere. We get it, Kevin, you're the "normal" relatable guy of the show.

Shopping Excursions to Vegas and Paris

Other than a last-minute trip to Charleston, South Carolina, the show's two travel destinations included mini excursions to Las Vegas and Paris, where the gang book private shopping appointments — as in, brands reserve the entire stores just for them — to pick out the latest fine jewelry or designer collections. I don't blame them considering there's only so much time you can spend in Rodeo Drive (or so I imagine).

Kane is apparently so proud of his shoe collection that he has them displayed on an entire wall of his living room along severals rows of shelves. I immediately spy the usual suspects: Christian Louboutin, Giuseppe Zanotti, but also Nikes that cost tens of thousands of dollars? Love this for him, even if his dating life is never really addressed...

If we had to narrow down the show's looks into a single trend, it'd have to be the ubiquitous logos and monograms from Dior, LV and Fendi (Kim Lee and her mom Kimmy are perhaps the biggest culprits). Ostentation at its finest!