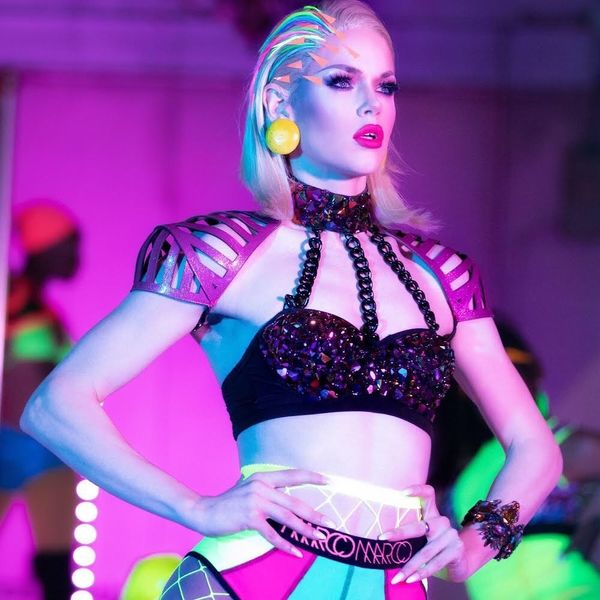 Blair St. Clair isn't just one of Drag Race's most beloved veterans, but also a pop queen with huge ambition. She released her first single "Now or Never" just one day day after sashaying off the show this Spring, and it's now gathered more than 2 million views. Her debut album Call My Life, full of sultry and electric empowerment bops, dropped a few days later and quickly soared to #1 of Billboard's Electronic/Dance charts, making her the first RuPaul girl ever to chart a Top 10 single, the only Season 10 queen to put an album on the charts, and the first ever Drag Race alum to top the Dance/Electronic category with a debut.

Today, PAPER has the pleasure of premiering Blair's playful, maximalist visual for her obsession anthem, "Irresistible." In keeping with her penchant for twists on classic Americana tropes, Blair taps into her theater roots to play a hapless wannabe dancer in the cinematic visual with comedic twist, inspired by both A Chorus Line's "I Hope I Get It" and Paula Abdul's "Cold Hearted Snake."

"I am so excited to release the music video for 'Irresistible' because this video is a visual representation of my growth in the past year since revealing that I am not just a sexual assault victim, but a survivor," Blair tells us. "This video represents the power and the inner strength I've gained, and it establishes that I am in control of my own sense of 'sexy.' I am, indeed, Irresistible, but my body is on my terms."

She continues, "The vision of the video was to combine Paula Abdul's 'Cold Hearted Snake' and 'I Hope I Get It' from A Chorus Line. I really wanted to tap into my theatre roots for the storyline of this video and show the difficult world of casting and the fire inside each aspiring rising star. The business isn't easy and neither is conquering inner strength, but there is so much passion waiting to be discovered! I think "Irresistible" is the perfect conclusion to the visuals I've produced on my album Call My Life as it best represents the person I've become today."

Watch the PAPER premiere of Blair St. Clair's "Irresistible," below.