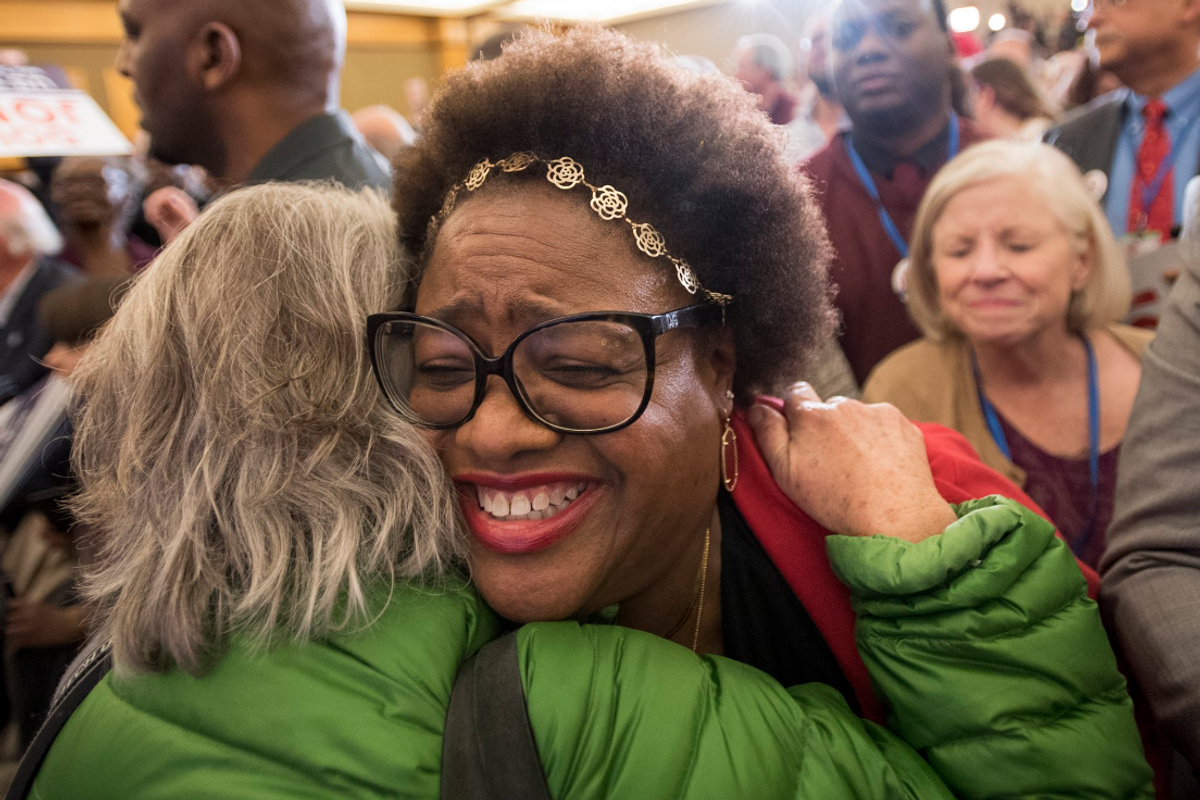 This year's Alabama senate race between Republican Roy Moore and Democrat Doug Jones evolved over the course of its run from a typical local state election into a litmus test for the direction of the country's political and cultural future. Though several allegations of sexual predation against women and minors by candidate Roy Moore were made during the campaign (not to mention his controversial political past, including refusing to remove a statute of the Ten Commandments in a government building), the very fact of Alabama's demographic makeup and history as a very red state led many experts to predict he would win. He didn't, and exit polls indicate that we primarily have black women to thank for that.

In the below infographics from the Washington Post, preliminary exit polls show black voters selected Jones by a 92-96% margin, and nearly 100% of specifically black female voters backed Jones. Voter turnout among black voters was also unusually high; CNN's exit poll found that 30% of the electorate was black, which is a higher rate than in the 2008 and 2012 elections when Obama was on the ballot.

In light of the win, people celebrated black women once again turning out to vote for what's right. Despite his anti-Muslim, anti-immigrant, anti-women, anti-LGBTQ (and so on and so forth) rhetoric, 54% of white women voted for Donald Trump. And despite her less than stellar record on supporting the black community, 94% of black female voters backed Hillary Clinton. This discrepancy was not lost on the internet (very little is):

"Alabama is a deeply Republican state, and the #AlabamaSenateElection will almost certainly go to Moore despite his vile behaviour."

America: No way Black Women will pull off this upset in Alabama.

But the narrative pushed onto black women that they must sacrifice themselves or put in extra work to rescue Americans from their own bad decisions is a problematic trope itself.

As Doreen St. Félix writes for the New YorkerNew Yorker, "The black female voter is especially invoked as a check on the moral void that would, in the case of Alabama's special election, allow the election of a candidate who had pursued underage girls and spoken fondly of life under slavery...Her lack of power and ego makes her the right arbiter of justice. Materially, though, she is ignored, and her efforts to safeguard her own welfare are instead regarded as efforts toward a national salvation. She is of American only because she works for it."

The real tea is Black women saved themselves not y'all. pic.twitter.com/kuQdTsPHEx
— Raquel Willis (@RaquelWillis_) December 13, 2017

Like I don't think people get that Black women don't turn out because of some maternal instinct to save everyone. We get usually hit first and worst by oppressive policies so we are saving ourselves. You just benefit.
— Keidra @ Mastodon (@kdc) December 13, 2017

Black women are not political mules to be used every time a mediocre white candidate needs to win.

No amount of verbal appreciation will do us justice. Turn over the money, resources and power, then we can talk.
— Charlene Carruthers (@CharleneCac) December 13, 2017

Jones' election marks the first time in 25 years that Alabama has elected a Democratic senator. Jones is best known for prosecuting two members of the Ku Klux Klan responsible for the bombing of Birmingham's 16th Street Baptist Church that killed four black girls in 1963. "I love Alabama, but at some point we've got to draw a line in the sand and say, 'We're not a bunch of damn idiots,'" retired NBA star Charles Barkley said at Jones' election eve rally in Birmingham.

Black voters - black women voters - many of whom are undoubtedly descendants of enslaved laborers in Alabama just said hell no and, once again, delivered a deliberate message, a challenge to the heart of America #NoMoore #AlabamaSenateElection
— Justin Shaw (@JustinPShaw) December 13, 2017

Lest we forget what it took for the opportunity for black voters, particularly black women, to deliver an unlikely victory in Alabama. pic.twitter.com/O5fscSJAH7
— Dr. Marcia Chatelain (@DrMChatelain) December 13, 2017

The sister of one of the girl's killed in that bombing, Lisa McNair, was present to celebrate Jones' historic win.

Activist Brittany Packnett put together a list of ways to actually help, elevate and thank black women for The Cut, which you can read here.