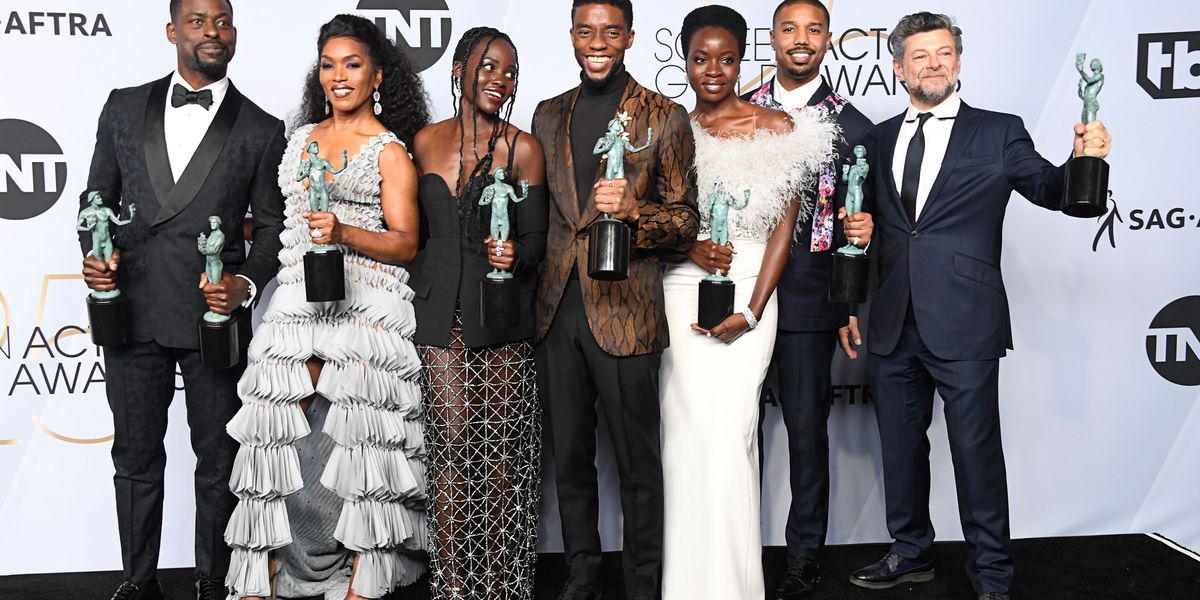 Black Panther isn't only a landmark film in terms of representation, its cast also gave an excellent and unforgettable performance truly worth noting. And on Sunday night, the Screen Actors Guild gave the Marvel movie's cast due recognition, awarding them the "Best Cast Ensemble" prize.

This was obviously an award none of the cast had expected to win. Once they were called to receive this top prize, you could see them all jumping for joy and clapping for this extraordinary victory. And once the cast took the stage, the Black Panther himself Chadwick Boseman admitted, "I didn't think I was going to have to speak."

BLACK PANTHER DOES IT! They take home the Actor®#sagawards pic.twitter.com/zZncxS8M6d

Boseman ended up giving an important speech to celebrate their win. CNN reports that upon the receiving the award onstage with his co-stars, Boseman spoke about "the cultural significance of the film's success and referenced the Nina Simone song, 'To be Young, Gifted and Black.'"

.@theblackpanther takes home the Actor® for Outstanding Performance by a Cast in a Motion Picture! #sagawards 🎭

According to The Hollywood Reporter's Pamela McClintock, the Ryan Coogler-directed film also makes history as the biggest box-office grosser to win this award, with $1.346 billion in global ticket sales. This surpasses the final Lord of the Rings film Return of the King, which gorssed $1.119 billion.

With $1.346B in global ticket sales, #BlackPanther is the biggest box-office grosser to ever win the top SAG award, passing up the final LOTR movie Return of the King ($1.119B). https://t.co/2XXT4vJInq

Congrats to the cast of Black Panther!