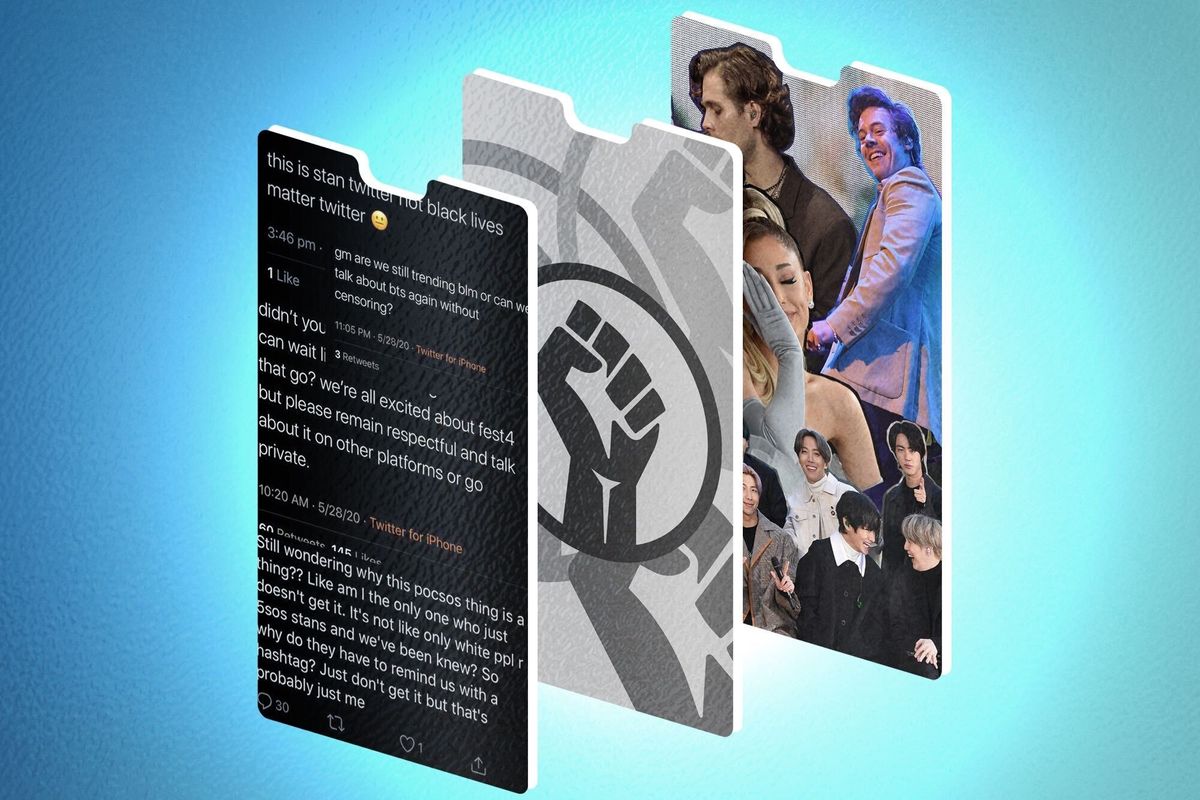 Over the months of June and July, conversations on social media were largely centered around the fight against police brutality and racism following the killings of Breonna Taylor, George Floyd and Tony McDade. Appropriately, timelines on stan Twitter that would normally be spammed with fancams and music takes shifted to petitions and bail funds nearly overnight, as Black Lives Matter protests drew supporters around the world. But even at the height of this activism, some pockets of the stan community were aching to move on as quickly as possible.

A K-pop account tweeted and then deleted the question, "Are we still trending blm or can we talk about bts again without censoring?" Around the same time, a now-deactivated The 1975 fan account launched an ill-fated attempt at "normalizing" their timeline, saying, "This is stan twitter, not black lives matter twitter." The treatment of Black movements as trends and inconveniences (see also: everyone posting those #BlackOutTuesday squares on Instagram) isn't new, but these types of comments shine a light on the sometimes-unwelcoming environment of online fan communities, that can function as a breeding ground for microaggressions, gaslighting, and racism. Especially as the Black Lives Matter movement starts to lose its virality in coming months, stan culture will need to do better.

Related | Reopen These Past Cases of Police Brutality and Negligence

Stan culture has never felt particularly compatible with anti-racism movements, and that starts with the celebrities themselves. As outrage continued to spread in May, close attention was paid to which artists were using their platforms to raise awareness and which were skeptically silent. Black Lives Matter supporters hoped these artists would use their large platforms to amplify and support Black voices. But many stayed silent, or did the bare minimum. While awaiting public statements from their faves, some fans began using their own within-fandom micro-platforms to spread awareness, petitions and donation links. But rather than demanding accountability from their faves, many others sat idly waiting for the movement to be acknowledged by the artist they supported before getting involved themselves, often willing to take the word of a non-Black artist over that of the Black fans on their timelines.

When some Harry Styles fans asked why it was taking so long for the singer to speak out as the George Floyd protests gained traction, they were met with pushback from defensive fans. He doesn't have to. He isn't political. He probably didn't see it. Why does it matter anyway? These were the same responses Black Harry stans received during his 2018 tour when they questioned why he hadn't yet waved a Black Lives Matter flag on stage as he had done nightly with pride flags. When Styles posted a graphic featuring George Floyd's last words, statements like "Thank you for using your platform!" and "Now that he finally tweeted are you guys happy?" from non-Black stans appeared frequently in the replies. They mark a constant pattern of Black fans being told that they're asking for too much by wanting an artist they spend large quantities of time and money on to do something as simple as make their solidarity known, while others praise them for doing the bare minimum.

Even when celebrities do come through and support social movements, the performative nature of stan culture has allowed for non-Black fans to impose an unwarranted hero complex onto white artists. What should be viewed as acts of solidarity become exploited as opportunities to brag about how much one artist has done in comparison to another, or to capitalize on the chance of interaction. When artists started breaking social distancing and lockdown protocols to march in protests, some stans had to be warned not to attend protests with hopes of running into them. "Don't even ask me. I won't say yes. That's not what this is about," Halsey tweeted ahead of attending a protest, quickly shutting down anyone planning on taking advantage of her presence there. It's disheartening that this clarification needed to be made at all; but, as we've seen, stan Twitter isn't always the best at reading the room.

The direct pathway of communication that social media gives artists should be leveraged more outside of the context of promoting music, and instead to address potential problematic behaviors within their own fanbases, as Halsey did. In January, disputes within Ariana Grande's fandom led to a Black fan being targeted with racist insults by a white fan, leading to the singer stepping in herself. "Y'all can bicker/have your twitter drama but this is not that," she tweeted. "Racial slurs/discrimination of any kind are vile and will not be tolerated." Black fans who are often the targets of racist attacks year-round by other fans over petty disputes deserve to have someone of authority on their side publicly defending them. Artists may not always catch these interactions when they happen, but a failure to speak on the presence of racism within their fandom when they do encounter it on their timeline is a failure to every Black fan who supports them.

In an effort to escape prejudice and increase their visibility, Black and other non-white stans have turned to cultivating their own within-fandom communities. But they face difficulties in doing so. In April, non-white 5 Seconds of Summer stans elevated each other by tweeting selfies using the hashtag #POCSOS. It didn't go as expected. "Still wondering why this pocsos thing is a thing," a since deactivated fan account tweeted in response, incapable of accepting the possibility that something just might not pertain to them. "It's not like only white people are 5SOS stans … so why do they have to remind us with the hashtag?" It's easy for white fans to feel emboldened by how much they're represented within fandoms in contrast to non-white fans. The fact that just being reminded of the existence of those fans can make them so uncomfortable speaks to the need for explicit inclusivity and allyship from all sides of fandom. Fans who fail to address these instances, or gaslight Black fans for being upset about them, are just as complacent as the artists who stay silent, if not more.

The silver lining is that stans have proven themselves as capable activists when they generally do make a point to step in for each other as allies and defense squads. They band together to crash police department surveillance apps to protect protestors and slam stans tweeting negatively about Black movements until their accounts are deactivated or on private. But we need more of this.

Black fans deserve better than to be made to feel uncomfortable in a community that's meant to foster support and connection, and if anyone is to feel unwelcome it should be the fans on the opposing side of that. Like most things on the internet, standom has roots in Black culture. Black creators and moments tend to originate popular slang and memes. These artifacts don't always come with an understanding of the culture they come from or how to properly use them — like people needing a crash course in how to pronounce "whew, chile." For that same reason, it's always been about more than just music. There's power in the amount of influence that stans allow artists to have over social conversations –– even if that influence doesn't necessarily extend beyond the walls of their specific fandom –– and even more power in the way stans address racism amongst themselves.