The art world's annual December pilgrimage to Miami for Art Basel is currently underway. The glamorous mega fair and the more than two dozen satellite fairs that exist in its orbit draw tens of thousands of attendees each year. Some go to schmooze, some go to buy, and everyone arrives ready to party.

So who's invited? Most of Art Basel Miami Beach takes place in a convention center a few blocks from the ocean. Million dollar paintings are sold by blue chip galleries, and over the years the event has expanded to include emerging artists from mid-tier galleries. Other shifts have occurred, too. While Black artists have always had a presence at Basel Miami, over the past several years there has been a significant uptick in representation and recognition.

This cultural shift is essential. It shines a light on the work Black and brown artists create — artwork that often speaks to the Black experience and chronicles the lives we live. Events like Basel help Black artists claim a piece of the billion dollar art market, which historically has excluded pretty much everybody save rich white men.

Below, some Black artists to know at Miami Basel and surrounding fairs this month. 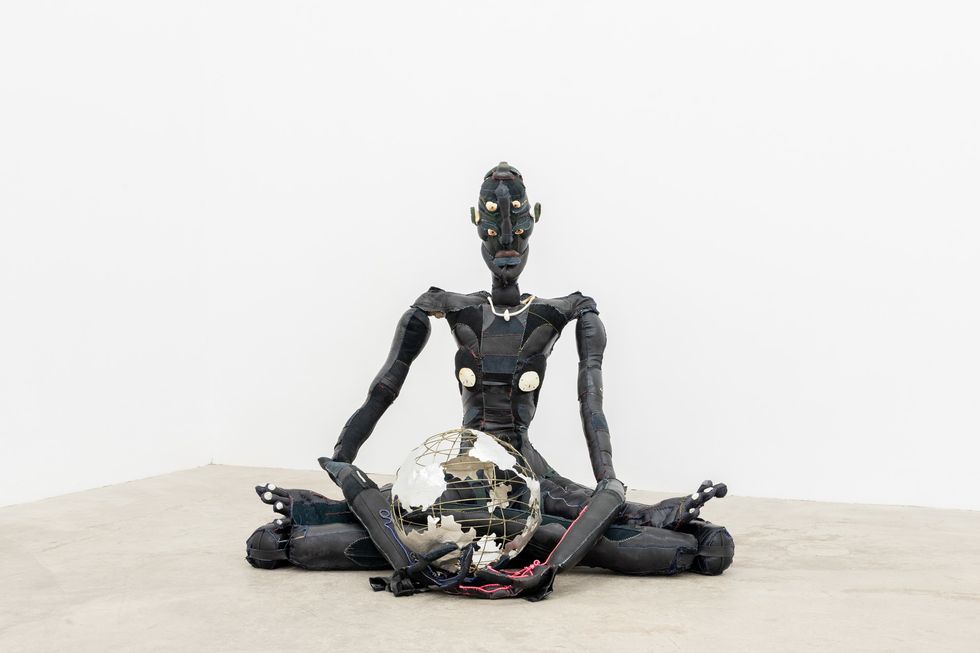 Tau Lewis is a self-taught artist who incorporates found and donated objects as well as recycled material into her work. Born in 1993 to a Jamaican-Canadian family in Toronto, her work incorporates the legacy of the Black diaspora. "Harmony," along with her other works shown by the Cooper Cole Gallery at Art Basel, is part of a body of work devoted to celestial ancestors. The artist has an interest in sci-fi and it lends itself to her unique take on sculpture. 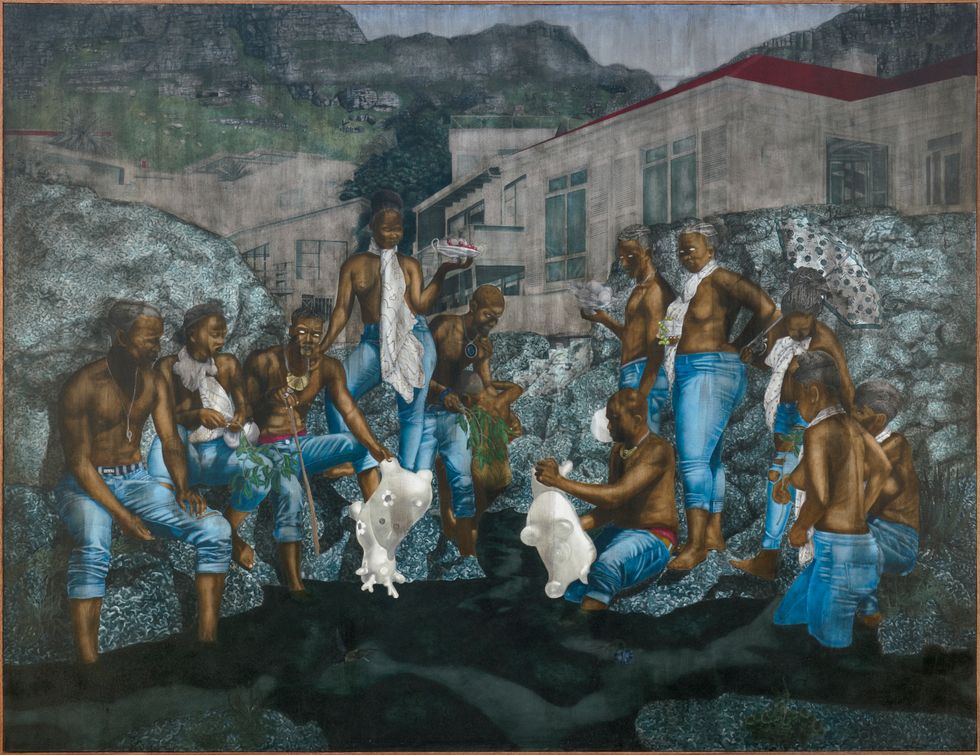 Cinga Samson lives and works in Cape Town, South Africa. The 34-year-old self-taught artist is mainly interested in portraiture. Samson is Xhosa, and the culture, with its superstitions and spirituality, plays a role in his paintings. Samson addresses themes of beauty, youth and blackness in the context of post-colonial South Africa. 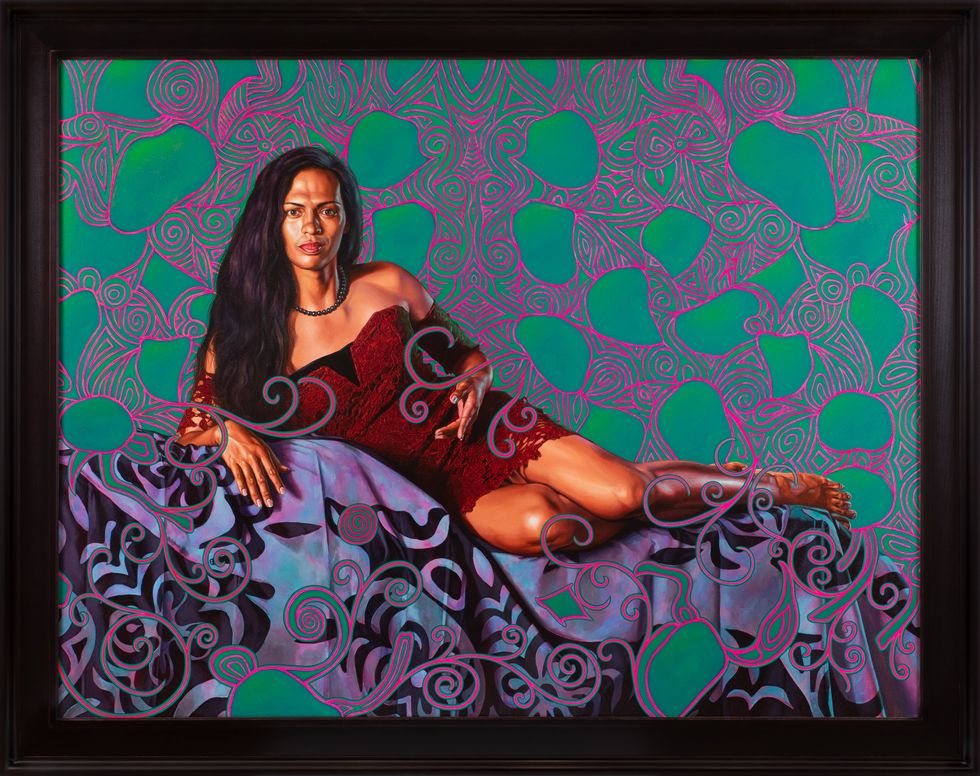 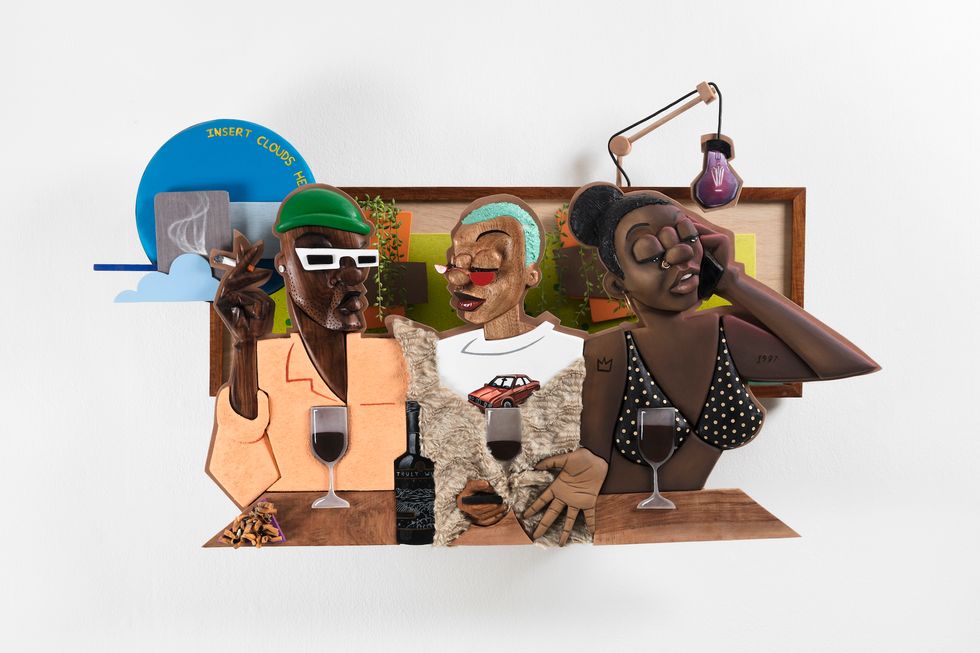 Dada Khanyisa lives and works in Cape Town. Their sculptural paintings are constructed from found objects that the artist describes as things "people neglect or take for granted." Khanyisa's work focuses on the human condition and most of their artwork is about the Black experience. 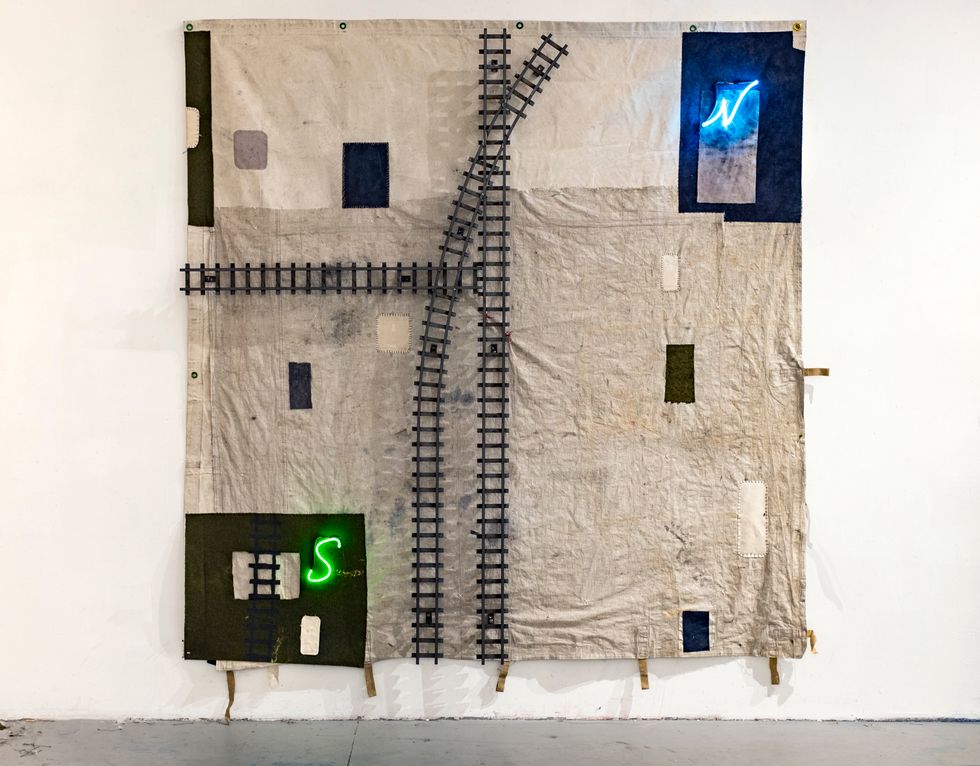 Radcliffe Bailey lives and works in Atlanta. His father was a railroad engineer, and railroad tracks play a large role in the artist's work. The neon N and S in "Pushman, Pullman, Portage" represents the north and south stars in the sky that helped guide black slaves to freedom on the Underground Railroad. 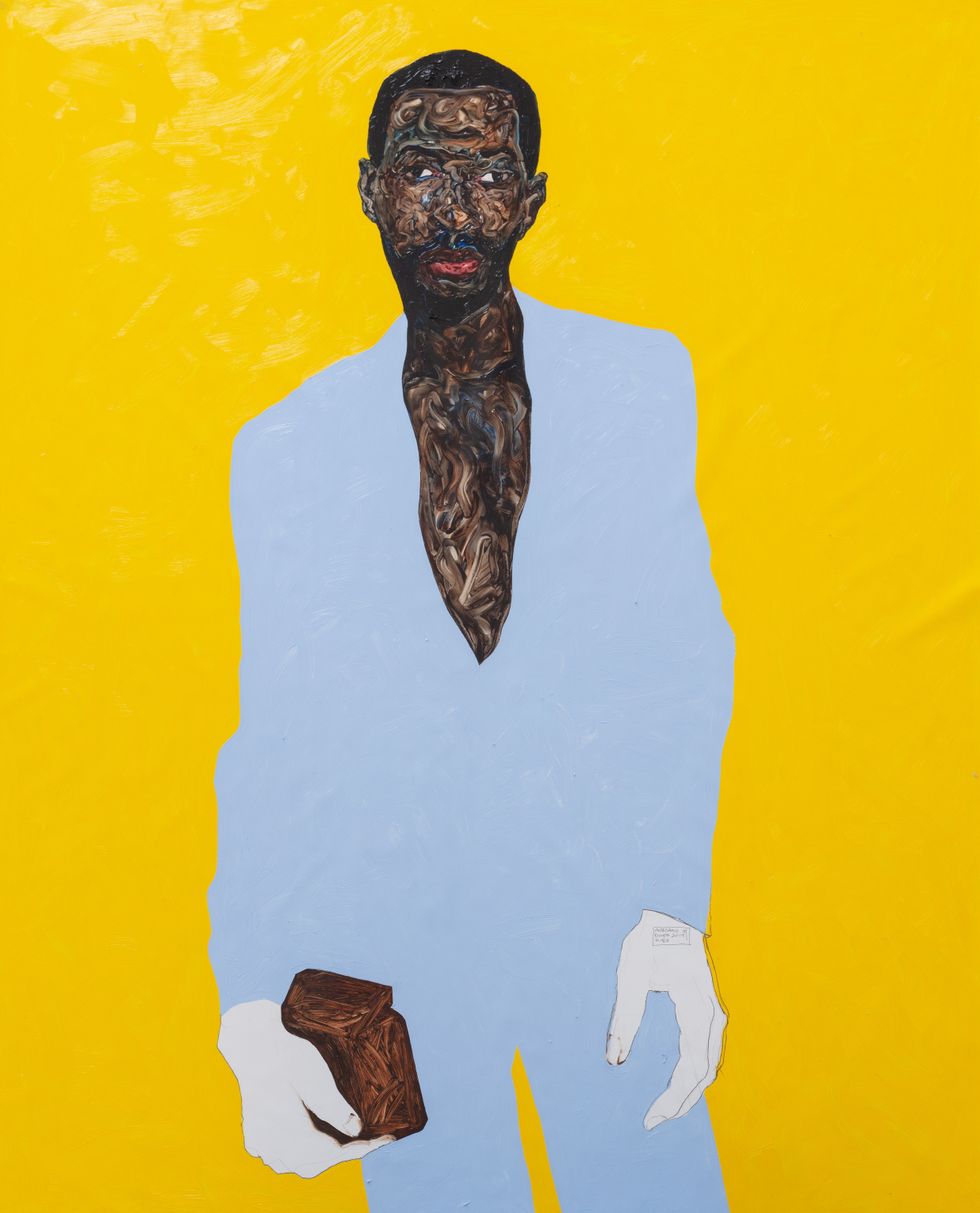 "Hudson in a Baby Blue Suit" (2019) Oil on canvas. Courtesy of the Rubell Museum

Amoako Boafo's work is all over Miami this week. He's at the new Rubell Museum, at Marianne Ibrahim's solo presentation at Art Basel and Roberts Projects, plus the cover of a few publications. The 35-year-old artist is from Ghana and lives in Vienna. He uses brush strokes and his fingers to achieve texture in his oil paintings. Boafo states, "The primary idea of my practice is representation at documenting celebrating and showing new ways to approach blackness." 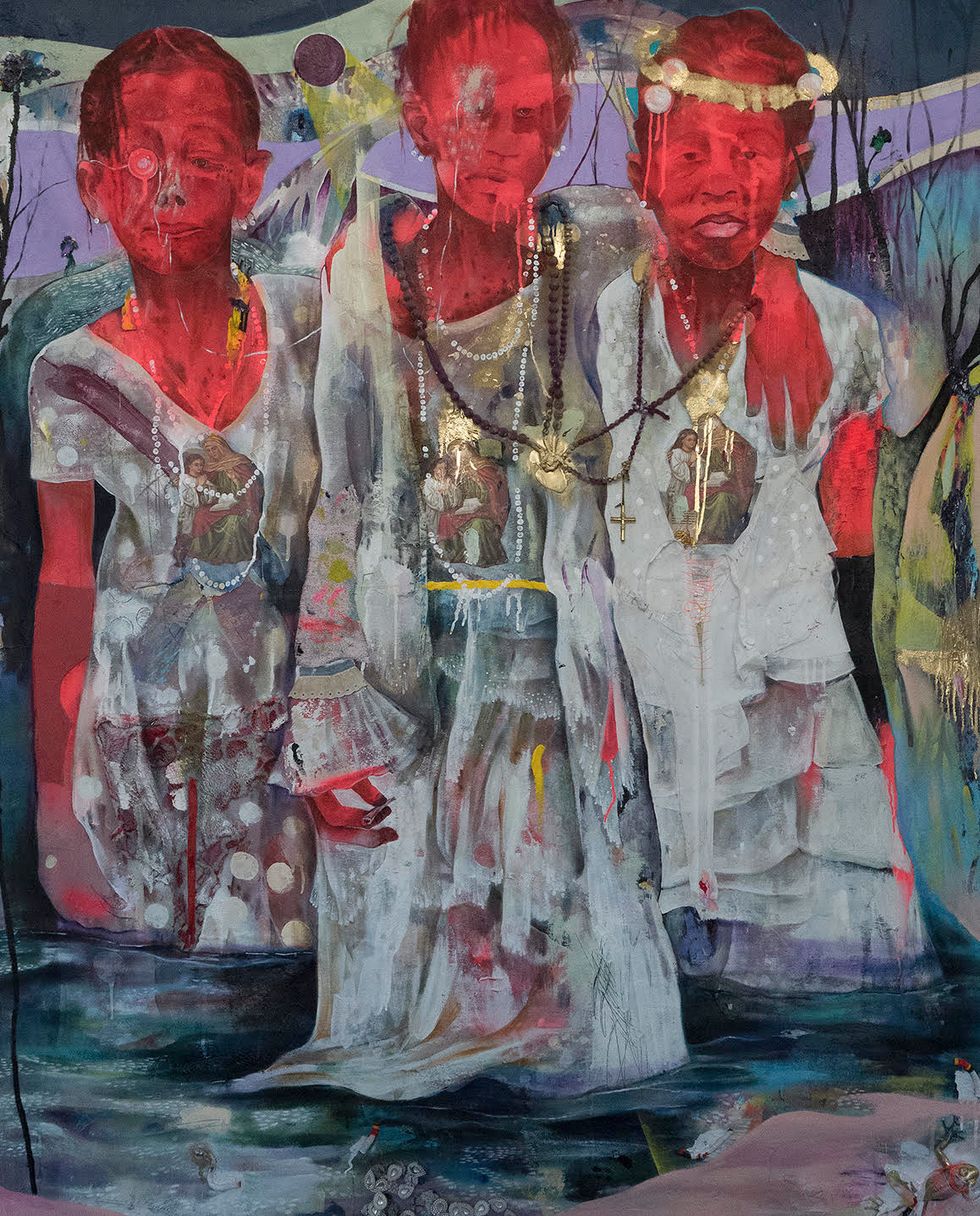 Lavar Munroe's "Church in the Wild" is from his series "Redbones," which illustrates that when our skin is removed, we are all the same underneath. The 37-year-old's art is influenced by his homeland of the Bahamas, where he had a 10-year retrospective at the National Gallery. Munroe has shown at the Venice Biennale and his work currently hangs at the Perez Museum in Miami. 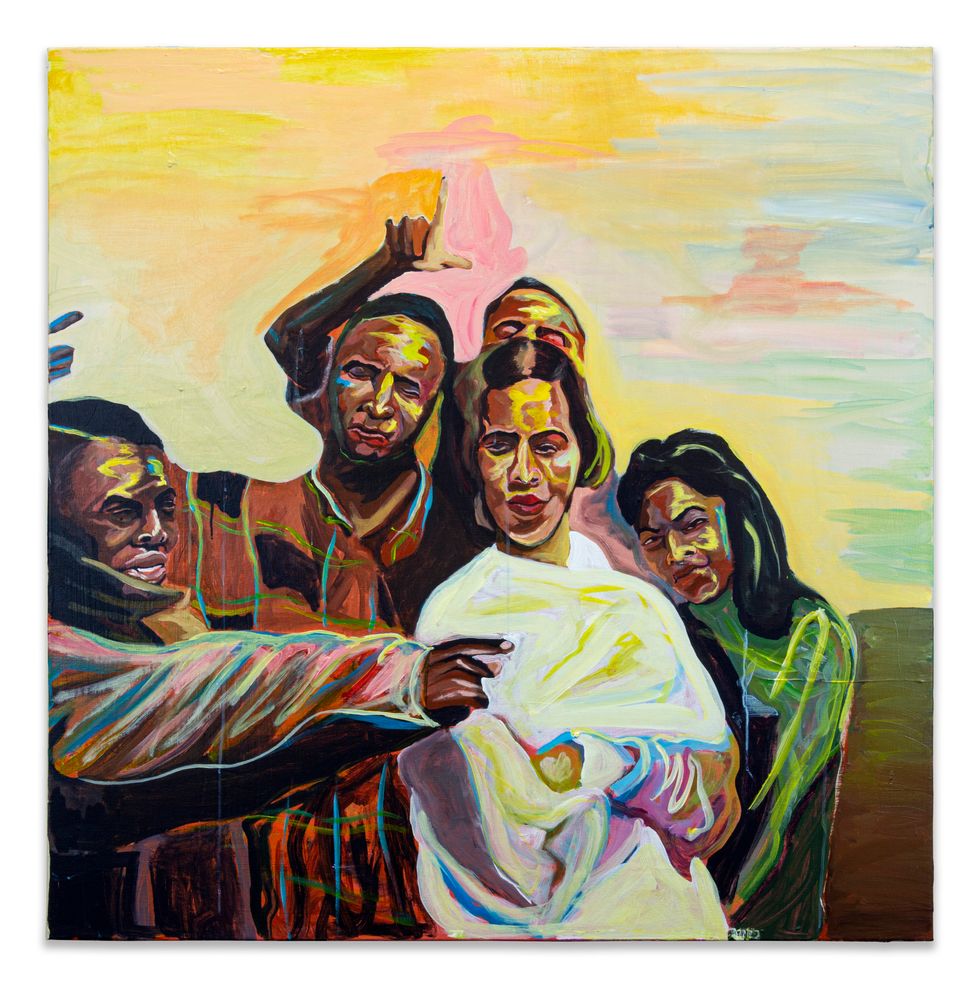 Marcus Brutus lives and works in Queens and grew up outside of Washington, DC, in Maryland. The 28-year-old is a self-taught artist who started out working in PR. Brutus' paintings depict the breadth of the Black experience. "Campus Clique" is from his series "Pearlescent Veil of Blackness," which shows "ordinary depictions of black subjects... intended to represent black humanity in its truest essence." 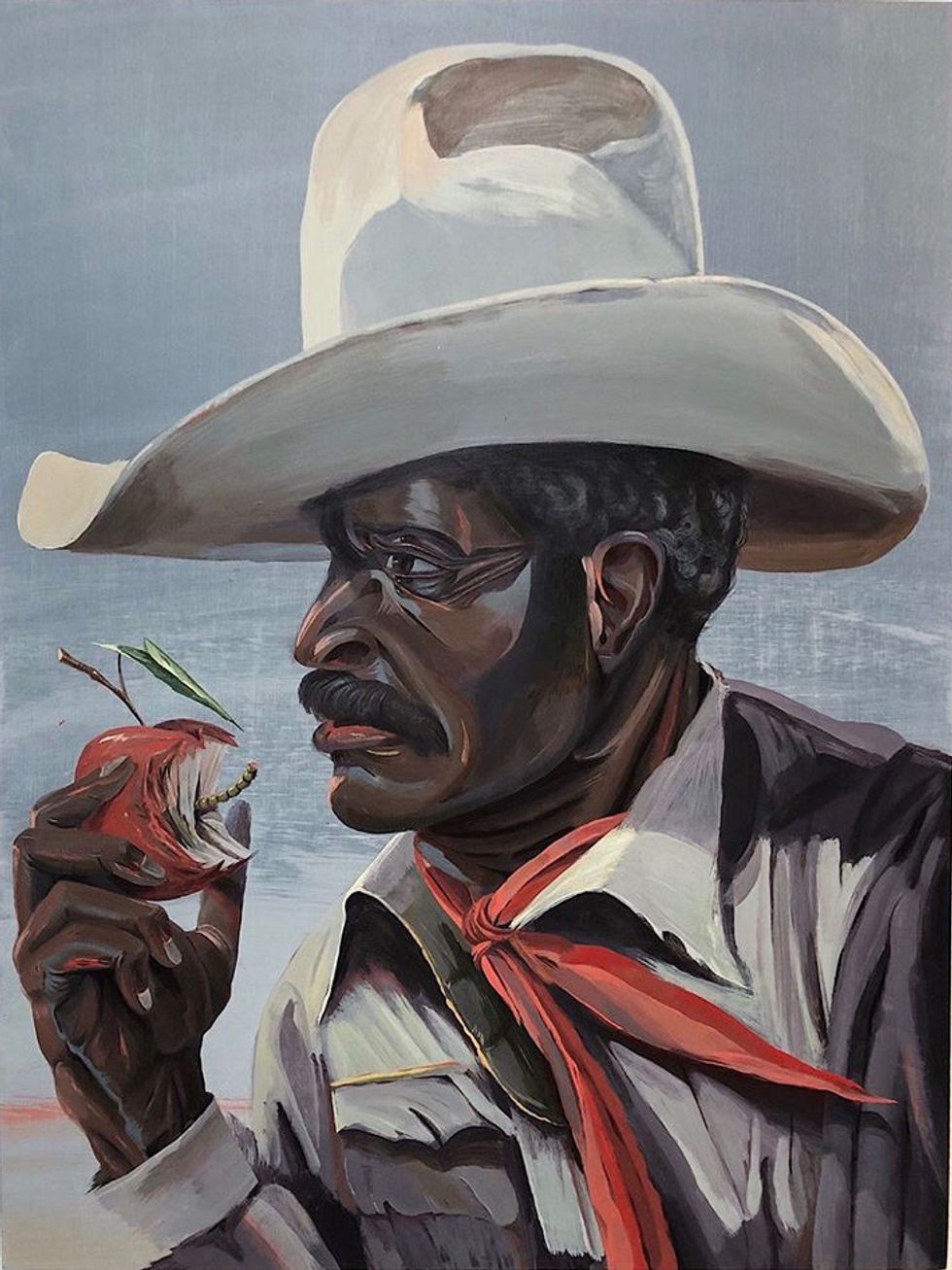 Alexander Harrison is a New York-based painter whose work speaks to growing up as a young Black man from Marietta, South Carolina. His work incorporates Black culture and the South. Welcome to New York explores visual tropes such as a Black cowboy taking a bite out of the big apple. The artist had a solo show this fall at Fisher Parrish Gallery in Bushwick, Brooklyn before the gallery brought his work to Miami to show at the NADA art fair. 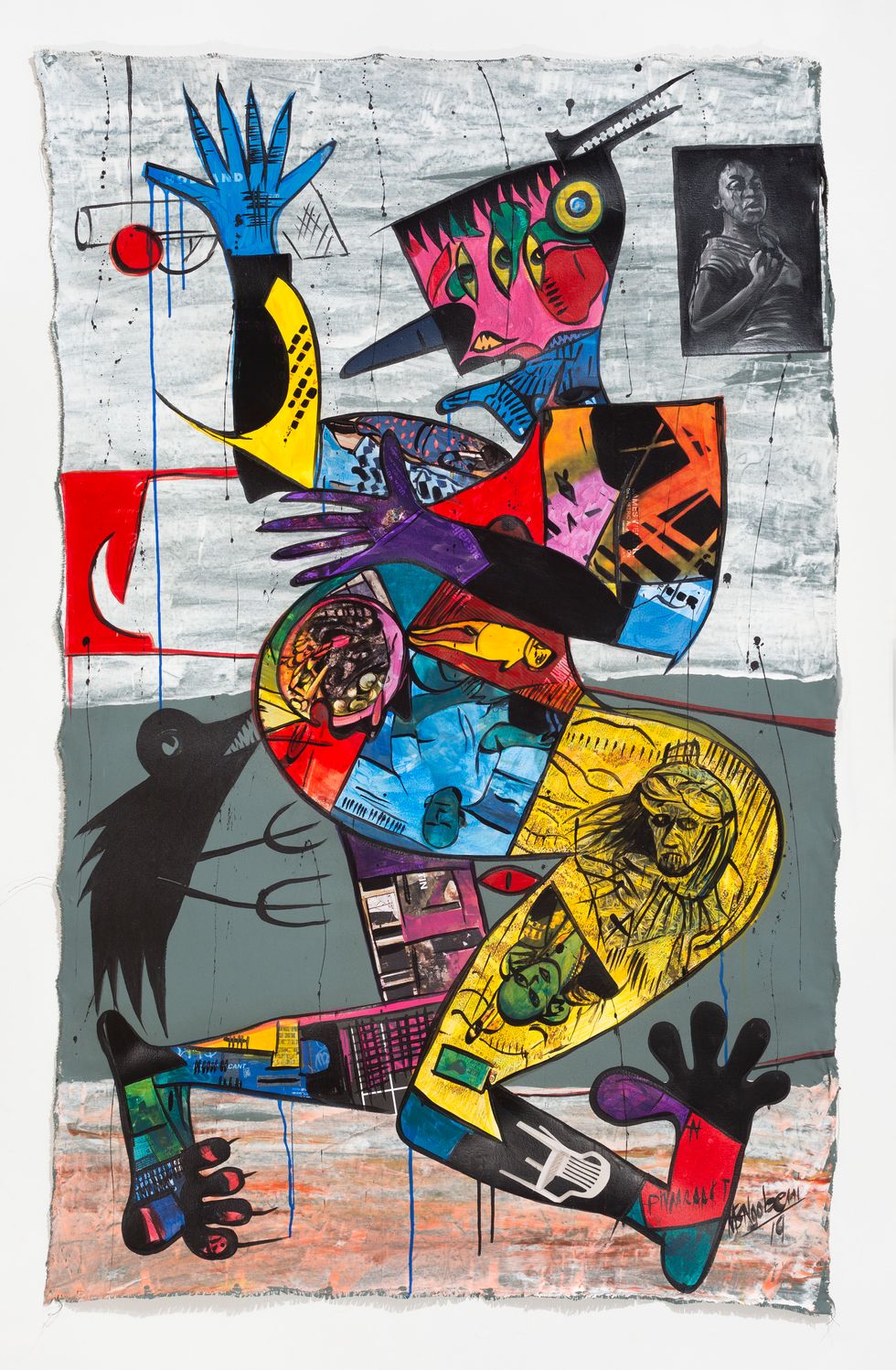 "Dance on Ancestral Ash 1" (2019), acrylic and collage on canvas. Photo by Michael Hall and courtesy of the Everard Read Gallery

South African artist Blessing Ngobeni just won the Standard Bank Young Artists Award 2020. His abstract mixed media works are created using a range of found objects and relate to themes of self-enrichment and the abuse of power. Ngobeni was arrested for armed robbery in his youth and began painting while serving six years in prison. 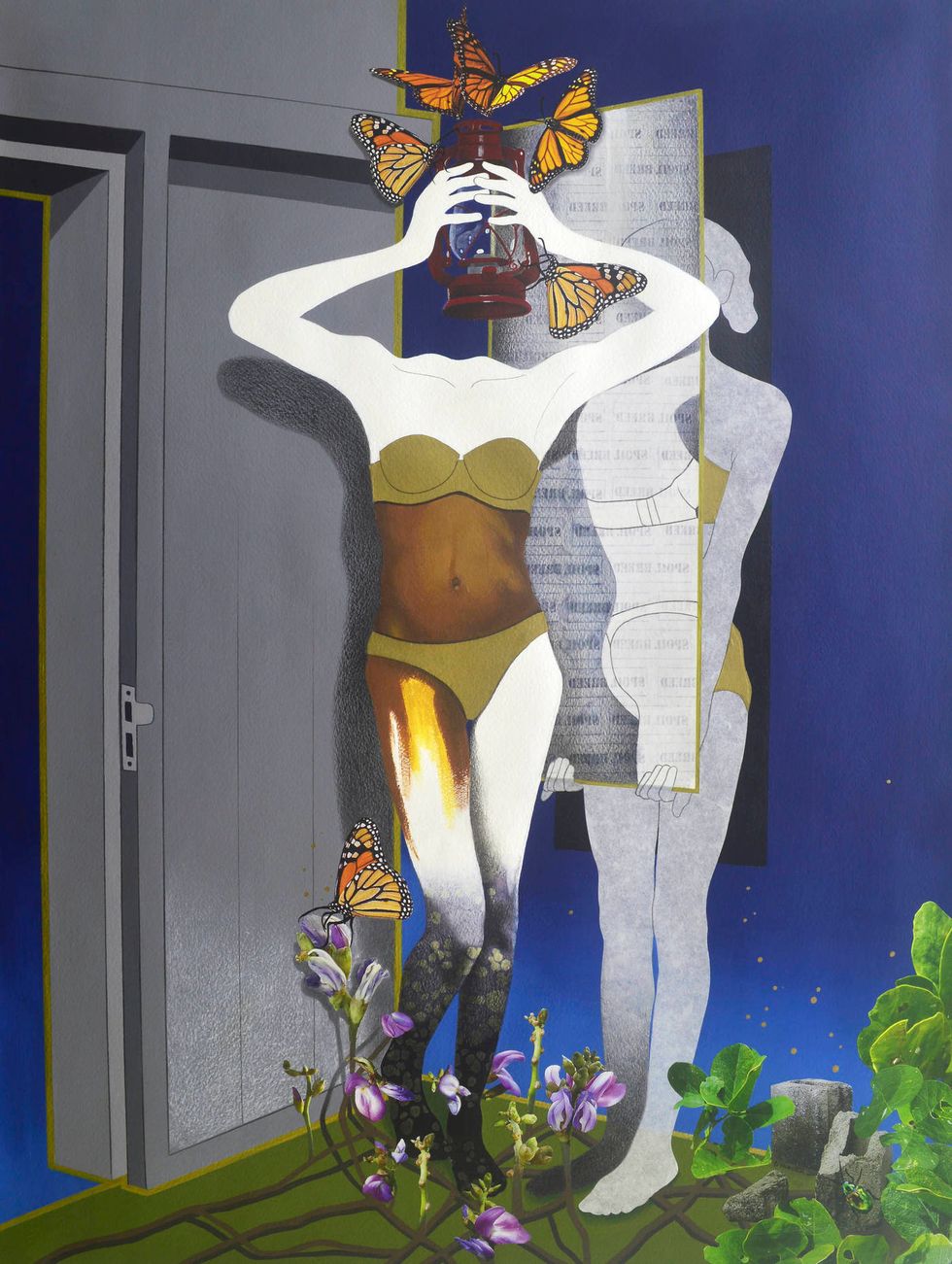 That The Burden Was Never Yours To Bear (2019), Mixed media on Watercolor paper. Courtesy of the artist and PRIZM Art Fair

Dominique Hunter is a Guyanese visual artist whose work is part of Prizm, a fair devoted to artists from Africa and the diaspora. Hunter works with mixed media collage on watercolor paper. That The Burden Was Never Yours To Bear is part of her Cusp series, which examines Guyana's legacy of migration and the push and pull of the "ones who leave and the ones who are left."