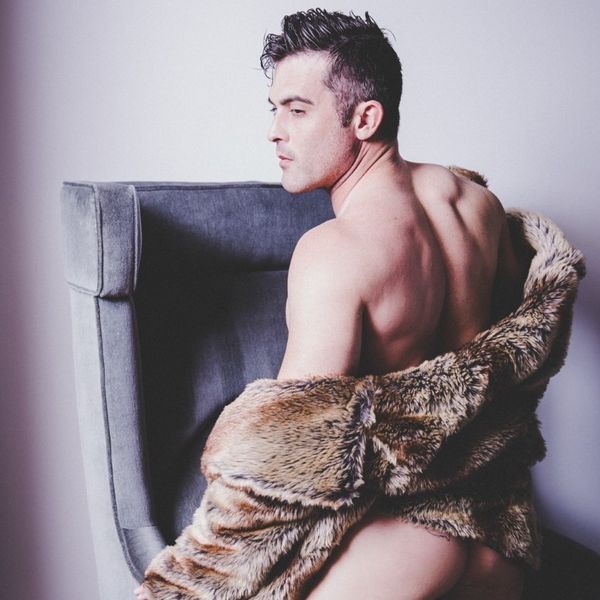 But why? Especially given all the scientific advancements and societal progress we've experienced over the past few decades? Well, as Chris Zeischegg — who used to perform as a crossover under the name "Danny Wylde" — points out, it's likely the lingering effects of incidents like the Derrick Burts scandal, which rocked the porn world in 2010. Burts, a former crossover performer, contracted HIV on set from a "known positive" male actor he had worked with on a gay shoot where condoms weren't used for oral sex — an incident that led to intense scrutiny of the sexual practices on the gay side of the industry, which didn't require testing at the time.

"If your comfort is based on prejudice, that bothers me."

"[Her rationale was], it complicates my ability to get jobs," Zeischegg explains. "Like, '[You] fuck fags, and I may get HIV too.' But I don't think she was alone in that sentiment."

And though this happened to Zeischegg over a decade ago, unfortunately, the extension of this stigma to the real-life partners of bisexual performers is something that's continued into the present day. According to Sartre, many female performers are fed misinformation by their agents who say working with crossover talent will "ruin their career" or that "all the bi guys are a higher risk for HIV and you need to be scared of them."

"Every year or year-and-a-half [a moratorium will happen], and people always text me and Lance like, 'Hey, do you know who it is?'" she says, before recalling an incident in which she was supposed to shoot with a company, who "suddenly" cancelled a shoot on her after a moratorium happened.

"I suspect it had something to do with the moratorium [and the fact I'm with Lance]," she says, though she's quick to add that her relationship is an aspect of her life that she's not willing to compromise on, even despite the stigma.

"She was trying get with a fancy agency, and she didn't want to be seen with a bi dude, because it would affect her work."

"I'd much rather be upfront about it and lose out on work than hide my life just to get extra bookings," Sartre says, before mentioning an ex-girlfriend of Hart's who "wouldn't even walk the red carpet with him at the AVNs [Adult Video News Awards]." Why? "She was trying get with a fancy agency, and she didn't want to be seen with a bi dude, because it would affect her work."

And this all continues to happen despite the current industry's incredibly rigorous testing standards, which utilize some of the most accurate systems modern medicine can provide. According to Hart, all performers must get tested bimonthly and results are posted on the PASS system — which will not approve undetectable performers, even though "there is no risk of passing on HIV if your doctor has confirmed that you are undetectable (or virally suppressed)," per experts — or a talent testing database, which verifies that a performer is undetectable.

"In the past 15 years in the US, there have been no on-set HIV transmissions, everything's happened off-camera in a performer's personal life," Sartre adds. "Our testing system is so accurate. We get tested every 14 days, and we use a really expensive RNA test, which detects the virus seven to ten days before you can transmit it. If you go to the doctor, they'll do an antibody test, which detects HIV in [about a month] and isn't as accurate."

"More often than not, it is a gay or trans person just because of life circumstances and lifestyle stuff, and thats totally fine," Sartre says, "But I think if you want to be nervous about working with someone because of an HIV risk, you have to treat everybody with the same amount of risk, because you don't know what people are doing in their personal lives."

"It's unfair to scrutinize one group of people when we're all pretty much doing the same shit," Sartre says. "You can try and be safe in your personal life and be safe on set, but at the end of the day, you don't know what people are doing."

For his part, Zeischegg agrees with Sartre's sentiment and says this issue has more to do with your sexual practice than your sexual identity.

"During my career, it did seem like fluid men were singled out," Zeischegg says. "There are other risk factors for HIV like intravenous drug use or sex without a condom, but rumors would circulate about all sorts of thing… but you never saw a girl dropped for any of those reason. It was only men who had sex with other men."

However, another issue that pops up is the prevalence of the argument that "everyone has the right to choose who they want to work with," per Zeischegg. As an example, he points toward the story of the late performer August Ames, who died by suicide in 2017 after her tweet about canceling a scene with a crossover performer caused half the industry to "straight up attack her and call her a piece of shit." What followed was a reactive backlash to the "cyberbullying," which argued that female performers have the right to choose who they have sex with.

"It became this complicated as fuck thing, because there's a certain amount of the industry that says, 'We don't want to stigmatize men who are fluid,'" Zeischegg explains, "But then there's this whole other issue of, 'If you're a woman, and you're actually concerned about this, who's to say that you need to fuck a guy who has sex with men?'"

However, Sartre has a slightly different view of the issue and argues that there's a possibility for that rationale to act as a cover for latent prejudice — something she says is a problem for performers of other races, sexualities, and gender identities at times.

As for the big question of whether or not residual homophobia is an underlying factor in the stigma, Zeischegg is hesitant to assign any definitive cause-and-effect.

"You have to realize a lot of people [in the industry] are coming from the Midwest or Florida," he continues. "You can't just expect them to be up-to-date."

That said, Zeischegg does believe that things are looking up. After all, when he was still performing, "if you were to meet a straight male performer and they did a solo scene for a gay company, it would be assumed that, 'You're a fag.' And all because, 'you're trying get the attention of men,'" Zeischegg explains. "Now, huge male performers…who fuck women for a living [do that on their own]."