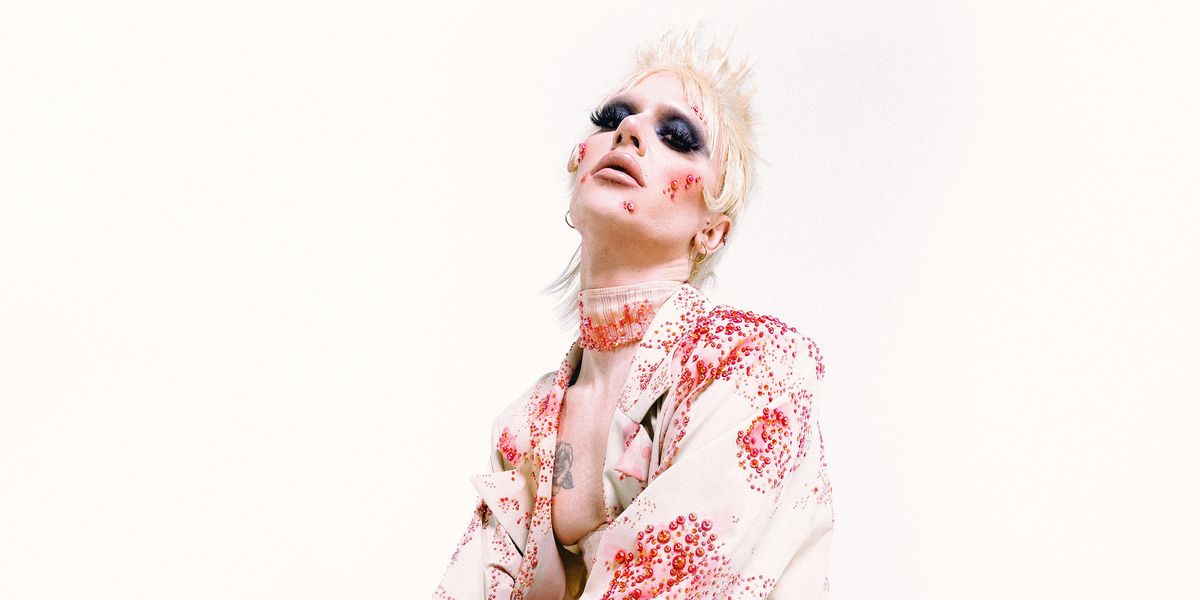 There's a global industry dedicated to removing them from your skin, but RuPaul's Drag Race UK star Bimini Bon Boulash has made a serious case for flaunting your zits, from head to toe.

As part of Season 2's episode on March 4th, contestants were tasked with creating looks under the theme, "Stoned on the Runway," for which competing queens created various jewel-encrusted looks.

Bimini's interpretation came in the form of a flesh-toned "zit suit," covered entirely with clusters of red 3D gems that resembled acne breakouts. Even her makeup and shoes matched, with enough pustules to make a pimple popper lose their mind.

"Did I make acne fashion?" Bimini questioned — or stated, rather — on Twitter to a resounding "absolutely" from fans.

And on Instagram, the drag provocateur spoke more about the outfit's creation: "When I got this category I knew this was the runway to do this amazing idea Ella had and bring it to life," Bimini wrote of her longtime creative partner, Ella Lynch. "Obsessed with this fashion moment."

Below, PAPER caught up with Ella Lynch to talk about collaborating with Bimini and creating the instantly iconic zit suit.

You've been working with Bimini for a while. How'd that creative partnership begin?

I met Bimini in 2015 when she was brought in as a glass washer at a club I used work at in Dalston. Part of my job was making costumes for all the staff, which they hated wearing until Bimini came along who was right up for it. Every week I would make her something different, often hats with lights in so people could see her coming through the crowd collecting glasses. Eventually I moved in with her and pretty much instantly started making her things to go out in from stuff we had lying around the house or bits from charity shops, and it grew from there as she became more serious about drag.

What is the collaboration process like between you two?

It's really enjoyable, as we both just really gel creatively. Bimini is up for anything, so I am never afraid to try something different or push things. Working with someone so supportive who makes me feel confident in my ideas means I thrive creatively and makes my work better. We're both always looking at what's next and how we can elevate things further. It's something that we used to just do for fun that has ended up professional.

Where do you find yourself pulling references from when you create this work?

It's really difficult to say. I like to heavily reference in my work, so I'm just constantly looking at a wide range of stuff. Screenshotting a lot is part of my process — high brow and low brow.

What conversations started the zit suit?

A couple of years ago, another queen asked me to embellish a trouser suit for her. She gave me the stones she wanted me to use, which I wasn't a fan of, and I said they looked like zits and boils. Whilst working on the suit the idea struck me, so I messaged Bimini saying, "We need to do a flesh-colored suit covered in acne using these stones." So when she got the list of what costumes she needed for Drag Race, we thought the ["Stoned on the Runway"] would be the perfect moment.

I don't tend to construct things from scratch. I prefer to sort of collage stuff together. Once I found the various pieces and ordered the most zit-like stones I could find, it was just a case of stoning for days and days on end. We had a different wig initially, which ended up being referred to as the "BoJo," so at the last minute we got a new one styled which featured on the show. We also tried the look with braces but it was a step too far. I kept the styling pretty muted to not distract from the suit.

How did you both hope that look would be received?

I was worried about it. I was actually going to scrap it right before she left for filming and do something more Drag Race-y, as I just didn't think it would go down well and was doubtful it read as acne — but Bimini reassured me. I also thought people might not be into the pub landlady wig, but turns out everyone is more open-minded that I thought.