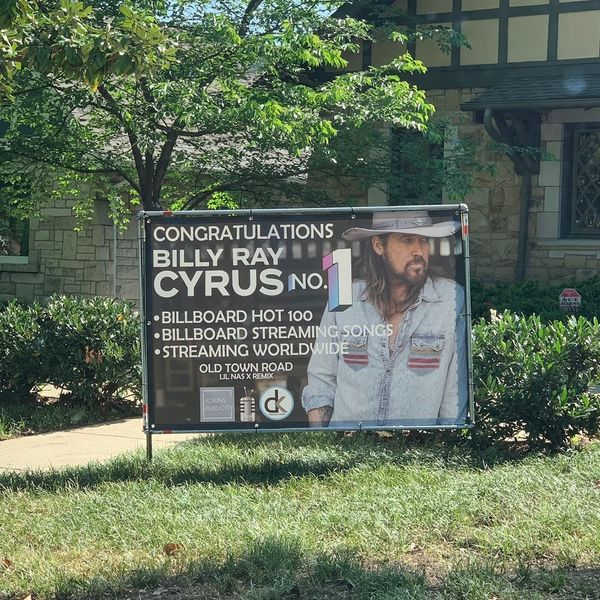 By now, you've likely heard about the well-publicized controversy involving Lil Nas X's viral hit "Old Town Road" getting booted from the Billboard Country charts. However, it appears that someone in Nashville — the hub for the country music industry — didn't get the memo.

In a now viral tweet by user @CakeMaster3000, a photo of a sign congratulating Billy Ray Cyrus on his number one hit, "Old Town Road (Remix)" can be seen alongside his tweet, which reads, "Damn. They took @LilNasX off the country charts but gave Billy Ray the congrats sign over here on Music Row in Nashville, TN." And even though some fans pointed out that Cyrus previously posted a photo with his own sign that read "I would not have this sign without Lil Nas X and [song producer] Kio," that apparently wasn't enough to keep the rest of the internet from picking up on the story.

But that's unsurprising, especially as @CakeMaster3000's tweet paints a damning picture. Not only is it a reminder of Lil Nas X's unceremonious dethroning from the Billboard Country charts but, at first glance, it also appears to be a erasure-filled celebration of the viral hit. Because while industry insiders explained that the celebratory sign was likely bought by Cyrus' publisher or label — a regular occurrence for hits in Nashville — the blatant shift in tone is jarring, especially as Cyrus' "achievement" is being so visibly and publicly lauded in the same exact space that outwardly rejected Lil Nas X's original a mere week earlier. Not only are the parallels to Black erasure within the Yee Haw resurgence strong, but it also raises the question of how the industry approaches contemporary crossover culture, as well as the discrepancies between the ways different types of crossover hits are treated.

After all, as a cursory examination of the current Billboard Hot 100 will reveal, our pop music now trends toward the genre-spanning with some of our most popular artists openly eschewing particular labels. Not only that, but as many have observed, a lot of popular music right now skews toward traditionally Black genres such as rap, R&B, and hip-hop. As such, there's plenty of crossover between the Hot 100 and Hip-Hop/R&B chart — the latter of which has embraced a healthy mix of everyone from straight-up rappers like 21 Savage to the contentious emo-rap of Juice WRLD and the blurry rap-rock of Post Malone.

Well, then why can't you also consider "Old Town Road" a country song? And why — unlike the Hip-Hop/R&B charts — has country only allowed a very certain kind of crossover pop hit to chart? And why has country, compared to the other charts, been so slow to embrace alternative cultural exchange, especially if pop as a whole is rapidly diversifying in terms of sonic motifs and influences?

Which poses the question: Was the rejection due to nit-picking sonic purists? Or was it, as many online asked, an underlying matter of racial gatekeeping? Perhaps country trap — an admittedly uncommon crossover — is simply too different for the current market. But then again, why was it even placed in the Pop, Hip-Hop/R&B, and Country categories to begin with?

Well, according to Billboard it was a "mistake." In a statement to Rolling Stone, the organization explained that musical composition is the "first and foremost" factor in terms of genre determination and "while 'Old Town Road' incorporates references to country and cowboy imagery, it does not embrace enough elements of today's country music to chart in its current version." Adding to this is the publication's report on the controversy, which points toward country insiders themselves being hesitant to change. After all, while "Old Town Road" was initially presented as a country song, after "the distributor did a quick temperature-check in Nashville," it turned out that "everyone kind of looked at it as a gimmick." Curiously enough though, while "Old Town Road" received with the same side-eye as another viral sensation, Mason Ramsey, the latter was able to stay on the country charts.

To that end, where does it start and where does it stop? And who gets to be the end all, be all arbiter of what "embraces enough elements of today's country music" in order to qualify it for the Billboard charts? Is there even any real transparency when it comes to the ways these lists, and who's included on them, are determined? After all, how much credence can we give an institution that still utilizes categories like "Latin" and "R&B" to denote, frankly, racially-defined subsets of music?

Obviously, this entire situation raises more questions than answers. So perhaps, the answer is to be more proactive and take this opportunity to re-evaluate our metrics as a whole. How do we come up with a more up-front way of figuring out how to categorize music in a world where "genre-less" is becoming the descriptor-du-jour? Or, at least, figure out how the industry will respond to incidents like this in the future so that we don't have to keep counting on Billy Ray.