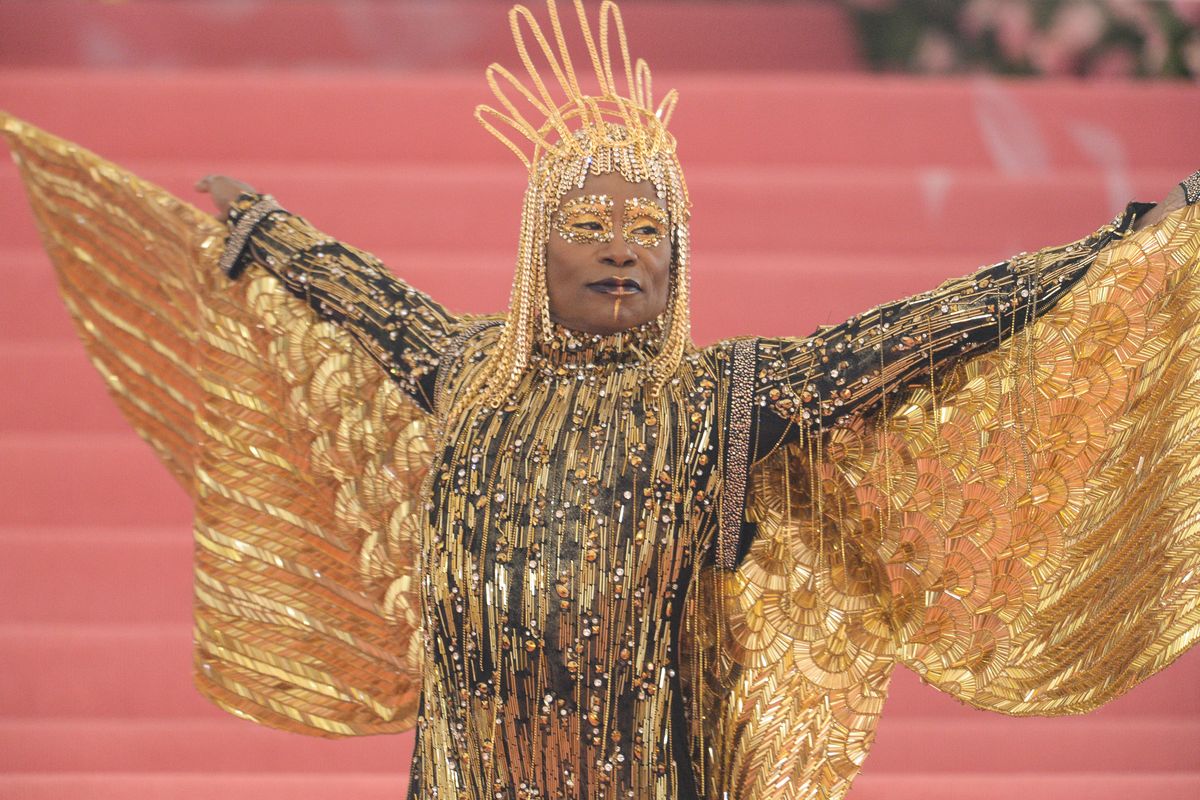 Everyone gagged at last night's Met Gala entrance by the one and only Billy Porter, the Pose star, and genderfluid performer who has been fiercely undergoing a playful, celebratory, and unapologetic fashion evolution.

This year, his over-the-top sartorial inclinations were jaw-droppingly inspirational, and right at home within the Gala's Susan Sontag-led theme, Camp: Notes on Fashion. Not to mention, they came from a long lineage of Black artists boldly blazing their own trails. For starters: The Egyptian litter he rode in on was carried by six shirtless, muscle-bound Broadway performers! He wore a head-to-toe embroidered gold look (with wings!) by The Blonds! The whole thing was inspired by the Cleopatra segment of '70s Diana Ross vehicle, Mahogany! Like Celine Dion in recent years, Billy Porter's mid-life fashion renaissance has also always been part of him.

Last night, after working together for six weeks on the concept, Porter and his stylist for over a year, Sam Ratelle — whose full-service boutique agency, RRR Creative, handles creative direction, branding, casting, styling, and PR for Broadway stars and Hollywood influencers alike — brought their glamorous vision to life. (Ratelle is also responsible for that Christian Siriano gown Porter wore to the Oscars this year).

"My understanding of what initially started all this is that Billy gets a call from [Pose showrunner] Ryan Murphy, and he's like, 'Bitch, I'm going as Liberace, you have to go as a whole montage in Mahogany,'" Ratelle tells PAPER. "Billy was like, 'OK that sounds like a lot of work.' Ryan was so excited and telling Billy he should do all the outfit changes, and finding a space to change and all that. Billy wanted to narrow it down."

Porter and Ratelle decided to mine the abundant Egyptian artifacts collection from the Met and Mahogany's Cleopatra-channeling scene to round out their vision. When it came to finding designers to make the clothes Porter would wear, due to Porter's currently New York-based filming schedule, they turned to The Blonds in the city.

"They are so campy and theatrical, he'd never been to Fashion Week, and it was one of our favorite fashion shows this past season," Ratelle explains. "It was part of his community and his people. I'd been going to the Blonds for years and knowing them. They'd done Egyptian themes and have been legends of high-fashion camp in New York, they were sold in Patricia Fields' old store in the East Village, we just thought, What could be better?"

And obviously, Porter being carried was the only way to make a truly godlike entrance and live up to the high Camp of the moment. "When Vogue approved us to have him be carried in, it was maybe two weeks ago," Ratelle says. "We had to get in all the men, and figure out where the hell this litter would come from. [Costume designer] Nicolas Putvinski [who designs Heidi Klum's Halloween looks] made the men's looks and the litter."

As far as casting Porter's carriers, Ratelle prioritized men of color. As we've seen from Porter's interviews over the years, representation is important to him. Ratelle says that all the men all had to be the same height, but other than that, the point was to amplify performers who don't always get regular work. "We are seeing more diversity in fashion but theater needs it, too," he says. "If you have an Asian show, you get Miss Saigon or a Black show, you get The Color Purple which is all important, but it's just as important to have multicultural experiences reflected whenever possible and often. Plus, we just wanted cute boys."

Ratelle calls Porter's Met Gala entrance "an interruption" akin to "watching a kid go to Disneyland for the first time and living his fashion dreams."

"He's been trying to do this for 30 years and no one paid attention," Ratelle says. "In the past, people overlooked him for being queeny and over-the-top, but now that's what's inspiring people, so it's been amazing to witness and be part of his evolution and see how the public responds, as well."

PAPER also caught up today with Porter to gauge his thoughts on his big Met Gala breakout. He was prepping for an audition. As he says, though he realizes the moment was groundbreaking, "the work continues."

Your evolution in the fashion space has been so amazing to see. And bravo for being so on-theme this year! What does Camp mean to you?

Billy Porter: Thank you! It had been in the back of the mind for my whole career. As time has gone on, people would accuse me of being flamboyant, as if it was a bad thing, but I knew better. And with Camp, it has over time taken on a negative connotation and treated as a way for people to describe something in a pejorative manner. What I loved about this idea of camp is that at its best, it is elevated, it is a true art form, which is amazing to me. I wanted to hit that on the nose. Ryan Murphy said to me, "You should do all five looks from the Mahogany montage," and I was like, "Bitch, I don't wanna work that hard." I loved the idea, but the moment that stood out the most to me was Egyptian because that can easily be elevated. I wanted to pay tribute in a modern way to the Bob Mackies of the world, and honor his work on that film. Cher, Diana, fascinate me. The Blonds in their own way have also taken up that mantle without putting a word on it. When we went to The Blonds, I loved the idea of the wings, the gold, and the glitter, it came together organically. And I was a god! So of course I couldn't walk, honey. They said you have to be carried, and I was like, "OK! Gods are carried!" Anna Wintour and them were like, "Okay, do you." We're fine with all the shenanigans and chicanery.

You're also showing people that it's never too late to express their fullest selves and to go after their wildest fashion dreams.

It's vindication. This has always been my thing from the time I got into this business. But those dreams were silenced and squashed! Particularly being in the R&B music space in the '90s, I had a record executive who was telling me not to speak too much. I went through a lot at that time and was literally silent. You know, it's easy to be who you are when who you are is what's popular. Authenticity is a word that is thrown around so much in every space. Every space you vibrate in has its own idea of authenticity, but authenticity only happens when it's convenient. It's respected when it's convenient and when it makes money. We make money now. Our stories are being told, and our authenticity that was silenced and squashed is now at the forefront. It's cool. I get to reap the benefits of an ever-changing world, and that's awesome, because now I, we, are changing the conversation. It's humbling and inspiring. I love it.

Were you emotional on the carpet?

I am today. It's too much energy out there at one time. It's so much that the focus becomes about how I get my work done. It's part of being an artist, a performer. We were working, and not everyone feels comfortable being playful like that. But it's what I get to be for a living, and I get to make a difference in people's lives because of the choices I make in those spaces. I heard that Margaret Cho said something really lovely. I have an audition today, so I'm preparing for that. The work continues. It's so beautiful.

"I was taught to perform masculinity so that people would believe me, and that it would be the only way I would ever achieve mainstream success. That's no longer true."

The example you set now can make it better for people in the future. When you wore the wings, what was it like to actually spread them?

They were a separate piece and my arms went into hooks that kept them on. The thing is that it's a freedom, and a metaphor of taking flight. I'm taking flight, after my wings grew back. They'd been clipped for a long time, and I get to fly now. It takes my breath away. Ryan Murphy has taught me to dream the impossible. I didn't know that it could look like this. I was told that I had to fix myself — that the performative art of masculinity was to be upheld. That's all it is: a performance. I was taught to perform masculinity so that people would believe me, and that it would be the only way I would ever achieve mainstream success. That's no longer true, and that's no longer the case. It's beautiful to see, to be a part of the generation that kicked the door down, and now, all these years later, to walk through the door. The people who were first don't always reap the benefits of what comes after that. The gift of this now is that I can benefit from something that my generation helped trailblaze. It's glorious.