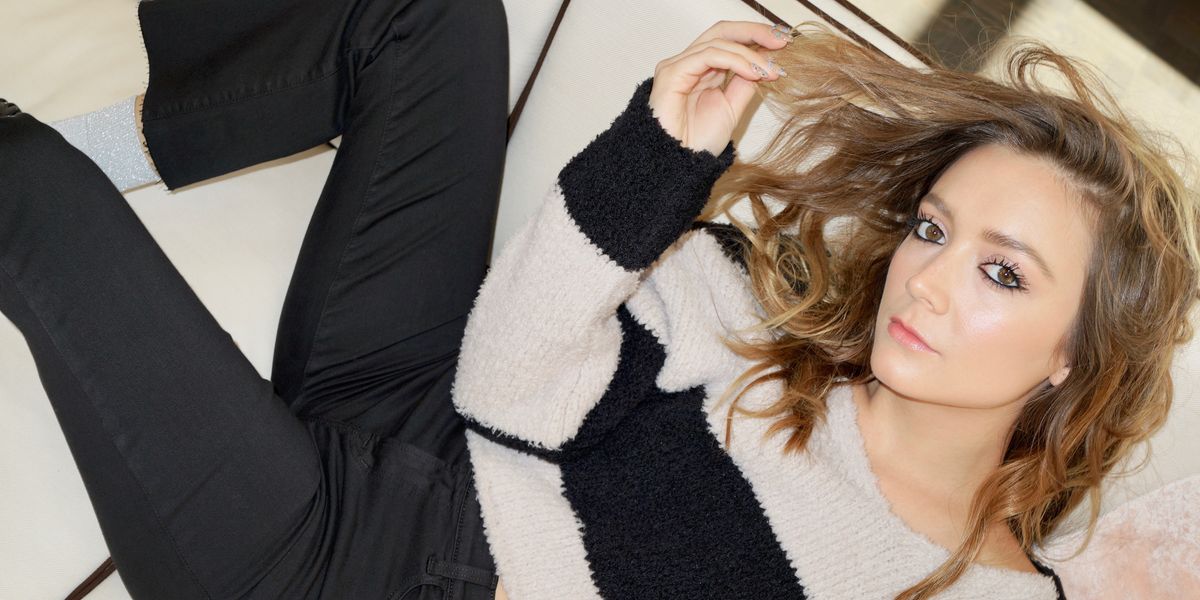 We have to admit we have a bit of a girl crush on Billie Lourd. The actress and Los Angeles native, whose mother is the late, iconic Carrie Fisher, has an impeccable Hollywood pedigree, having starred in Scream Queens, American Horror Story and the Star Wars series. With more than 1 million Instagram followers, she's also a fashion it-girl who claims to have started the J Brand Jeans trend back in the day at her middle school.

So how perfect is it that J Brand took Lourd to LA's Sunset Tower Hotel for a photoshoot featuring their new holiday collection, available now online. PAPER caught with the 26-year-old actress to hear all about the shoot, and her relatable love of chicken fingers and Shirley Temples.

I saw the pictures and they look great. What was the shoot like?

It was a blast, honestly, so much fun. It was hilarious. We did it at Sunset Tower and we were listening to music the whole time. I was eating chicken fingers and drinking a Shirley Temple. I was basically living my truth.

Wow, talk about a Hollywood lifestyle.

I know, right? That's how I do it. That's the only way. Basically, I haven't aged since I was five. I still eat chicken fingers and Shirley Temples. I've been obsessed with J Brand since middle school. I think I pretty much started J Brand at my middle school. Some girls would probably try and come at me about that, but it was me. So I was so, so excited when they asked me to do this. And honestly, I just had such a blast all day. I took home everything I wore, because it was all so dope.

What is it about J Brand that you like and what did you like in high school?

Just that they fit me. They fit. I can wear them and I don't have to hem them. It's such a rare thing for me, because I'm a tiny, little, short human with, you know, a little bit of a body, to put it lightly. So I just love that they fit and they're comfortable and easy, and it's just the best. I've been wearing them since I was 12, so I was beyond stoked.

One thing they said is that they really love how you're so real and raw on social media with your fans. Was that a compliment to you? Do you feel like that's true?

I will take it, yeah. I try to be as real and raw as I can all the time. I don't know, I'm not very good at social media or technology in general, so I do it my way. I don't know if it's a good way, but it's the way I do it.

If someone tries to fight with you, do you engage with them or do you ignore them? Or do you only engage with positive stuff?

Absolutely not. I only speak with positivity. I try to ignore the troll-y humans as much as I can. Because there's no point, they're trying to get a rise out of you. You have to feel sorry for those people, because there's something up with them that they're dealing with. It's not about you usually. So I try to just ignore that stuff and encourage the positivity. Mostly it's positive. I'm pretty lucky.

Do you get much attention on social media from fans of your mom or your grandma, or are those people all too old, like me, for social media?

Actually, my mom has tons of fan accounts, and it's so, so nice to get to see because they have all these pictures that I haven't seen and I wouldn't see unless they posted them. So it's really, really nice, because I kind of get to connect with my mom and grandma every day through social media, through these people that support them. It's really lovely.

One of my favorite pictures on the J Brand post is the one where you have a bare midriff. Is that a look you would really wear out on the street or is that just a photo-shoot only look?

I've been trying to show my stomach a little bit more. One of the things my mom said when I was younger all the time was, "I wish I would've flaunted my body more when I had it." So, you know, I'll show a belly button out here and there, but I usually try to keep it covered. But, you know what, I don't know, I'm 26, I've only got like two more years of showing it, so I might as well do it now.

I say just wear a bra top and jeans. That's all you need.