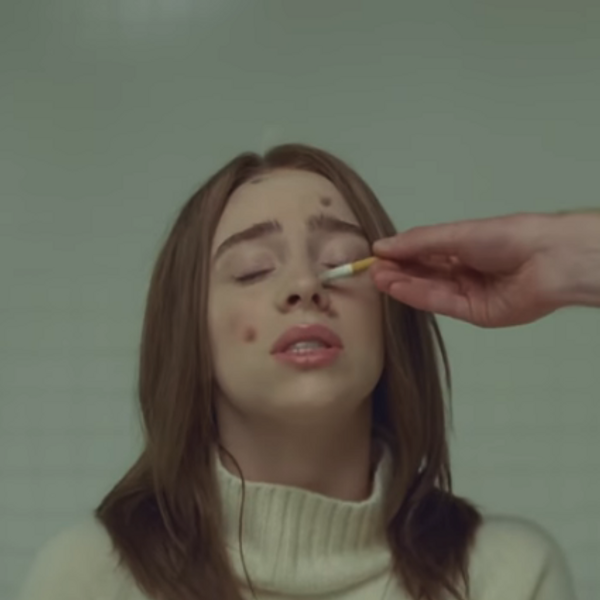 Billie Eilish music videos are always memorable. The darkly comedic "Bad Guy" sees her emasculate important-looking men. She performs paranormal body contortions in "Bury a Friend" and plays an oil-slick angel wandering around a climate dystopia in "All Good Girls Go to Hell." She cries blue blood in "When the Party's Over" and enlisted her friend Takashi Murakami for a horror anime short for "You Should See Me in a Crown."

The goth teen queen of the charts' directorial debut is on brand. Billie directs and stars in the latest When We All Fall Asleep, Where Do We Go? visual, for anti-drug ballad "Xanny." She's 'fitted in an unusually preppy, Eileen Fisher-esque sweater set (I've been informed, she's actually wearing LA luxury brand The Elder Statesmen). Her typically neon dirty-green dye-job and acrylic nails are respectively normie shades of auburn and nude for the occasion. More expectedly, the clip appears to be set in a mental institution. As Billie starts singing, disembodied hands reach into the frame to stamp out cigarettes on her neatly made-up face, leaving her freckled with burns.

BILLIE EILISH on Instagram: ““xanny” VIDEO OUT NOW! DIRECTED BY MEEE😁 GO WAAAAATCH AND MAKE EVERYONE YOU KNOW WATCH. LINK IN BIO”

Billie has said that "Xanny" was inspired by watching friends use the extremely online drug, glamorized by Soundcloud rappers and starterpack memes alike, and her personal experience with loss.

"I have never done drugs, I've never got high, I've never smoked anything in my life. I don't give a fuck, I never have. It's just not interesting to me. I have other shit to do," Eilish told The Guardian in March, continuing, "I don't want my friends to die any more."

The video ends with Billie walking off-screen as the room fills with noxious secondhand smoke. The concept plays off the song's lyrics. "I'm in their second hand smoke/ Still just drinking canned coke," she sings, later adding: "Please don't try to kiss me on the sidewalk/ On your cigarette break/ I can't afford to love someone/ Who isn't dying by mistake in Silver Lake."

You may be wondering, are the kids okay? I mean, no... absolutely not. None of us are. Gen-Z's early onset exposure to social and political terror has left them making freaky-ass meme music and styling themselves as monsters.

But based on this showing from Billie, they're finding their own ways to process it.