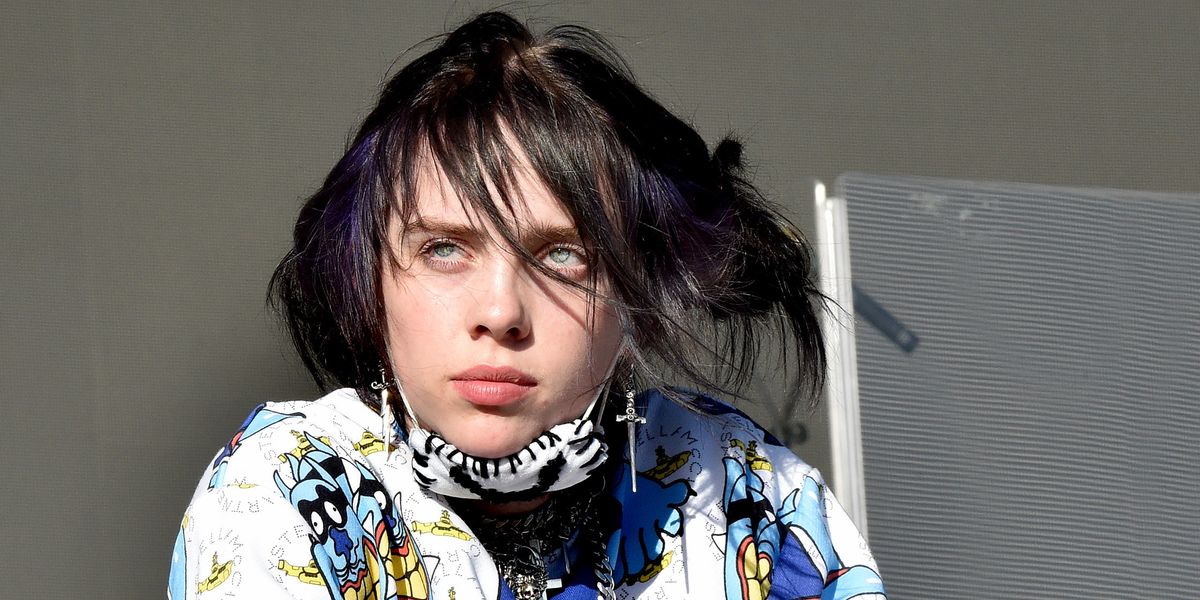 Billie Eilish: Don't Use My Style to Slut-Shame Others

The Billie Eilish uniform includes oversized monochrome menswear, fist-fulls of chunky rings, neon acrylics and huge ugly sneakers — best for racing around and jumping up and down on festival stages. Occasionally it includes a three-piece, flowery tie-dye sweatsuit.

She recently explained her style in a campaign for Calvin Klein. "I never want the world to know everything about me. I mean that's why I wear big baggy clothes: nobody can have an opinion because they haven't seen what's underneath, you know?" she said, continuing: "Nobody can be like, she's slim-thick, she's not slim-thick, she's got a flat ass, she got a fat ass. Nobody can say any of that because they don't know."

Her style often receives praise of two distinctly different tones. The first is a one of awe, coming from those moved by watching a 17-year-old semi-masc goth girl break every rule of what a Top 40 (as of yesterday, No. 1 hit-scoring) teen pop star can look like. Another tone is moralizing and drenched in respectability politics, by which people favorably compare Billie's modest looks with former pop idol peers like Britney Spears, Taylor Swift and the likes, in order to slut-shame women who openly express femininity and sexuality.

Billie shared her thoughts on the conversation around her style in an interview with Pharrell, for her V Magazine cover which saw her with bangs and waist-length locks — breaking down her frustration with the latter kind of praise.

V Magazine on Instagram: “| 𝕾𝖕𝖊𝖑𝖑𝖇𝖔𝖚𝖓𝖉 | When V was born, Y2K’s wave was cresting. 20 years of memorable stories later, we find ourselves at the onset of a new era;…”

She continued, describing the cognitive dissonance of being praised through the shaming of other women:

"It's a weird thing because I know a lot of what I hear is a positive or people trying to be positive about how I dress; how I am never really out there wearing nothing, or wearing dresses. I've heard that. [Even] from my parents, [the] positive [comments] about how I dress have this slut-shaming element. Like, "I am so glad that you are dressing like a boy, so that other girls can dress like boys, so that they aren't sluts." That's basically what it sounds like to me.

"I can't [overstate how] strongly I do not appreciate that, at all" she said, condemning comments on her looks that shame other women.

"...I have never ever looked at a girl who feels comfortable in her clothes, body, and skin and thought, "Ew, that's gross, she is showing too much," or, "I wish people wouldn't wear that." I have never in my life felt that way. I have always supported and fucked with and just loved when a woman or a man or anyone in the world feels comfortable in their skin, their body, to show just whatever they want. I don't like that there's this weird new world of supporting me by shaming people that [may not] want to [dress like me]. "

Hear that, pearl-clutchers? The virtue of Billie's style is that it's all about choice: respect everyone's.