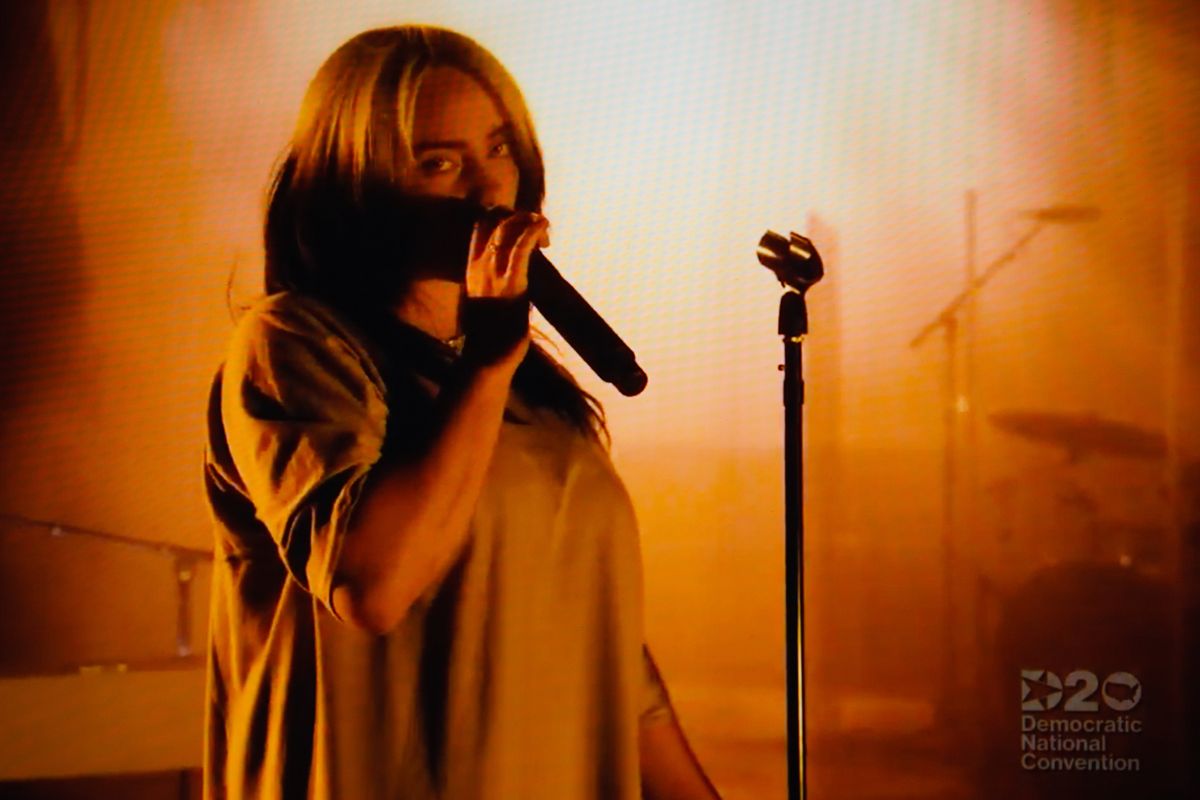 Tonight marks the third night of the ongoing virtual and socially distanced Democratic National Convention, which is making the case for Joe Biden as the official Democratic presidential nominee along with Kamala Harris as the historical Vice President choice. In this music festival-deprived year, the DNC has featured several star-studded performances, including John Legend, Jennifer Hudson, Leon Bridges, Maggie Rogers and Prince Royce in its two nights thus far.

Last night, in between speeches from Hillary Clinton and Elizabeth Warren, the major party recruited one of the most ubiquitous names in contemporary music, Billie Eilish, for a notable and emotive performance. The record-breaking GRAMMY sweeper took to the stage for her first-ever live rendition of new track, "my future," which was originally released last month.

Before her performance began, Eilish addressed impending voters in a pre-recorded message: "You don't need me to tell you things are a mess," she says while looking directly into the camera. "Donald Trump is destroying our country and everything we care about. We need leaders who will solve problems like climate change and COVID, not deny them. Leaders who will fight against systemic racism and inequality. And that starts by voting for someone who understands how much is at stake. Someone who's building a team that shares our values."

She continues, stressing the importance of voting in order to preserve democracy, and elaborates on her endorsement for Biden: "It starts with voting against Donald Trump and for Joe Biden. Silence is not an option, and we cannot sit this one out. We all have to vote like our lives and the world depend on it because they do. The only way to be certain of the future is to make it ourselves. Please register, please vote."

Eilish is then seen sitting beside a keyboard on a stage enveloped in a hazy purple hue. She croons the first verse and pre-chorus of the aptly-titled single for the evening, "my future."

Equipped with delicate keyboard notes and her signature whispery, hushed vocals, Eilish's lyrics promote self-love, empowerment, and looking forward to days ahead rather than being tied down by a long-overdue relationship. "You don't seem to notice I'm not here," she sings, "I'm just a mirror."

By its second verse, backing beats increase and the lighting around Eillish's stage flashes to a vibrant yellow. "'I'm in love with my future/ Can't wait to meet her," she sings to her future self in the chorus, "I'm in love, but not with anybody else/ Just wanna get to know myself."

She is supported by a live drummer as well as her brother and frequent collaborator FINNEAS, who provides backing electric guitar instrumentals as she dances around the stage. Her dog also makes a welcome appearance.

Biden shared Eilish's message to Twitter shortly after her performance, writing, "I'll just say what @billieeilish said: vote like your life depends on it. #DemConvention."