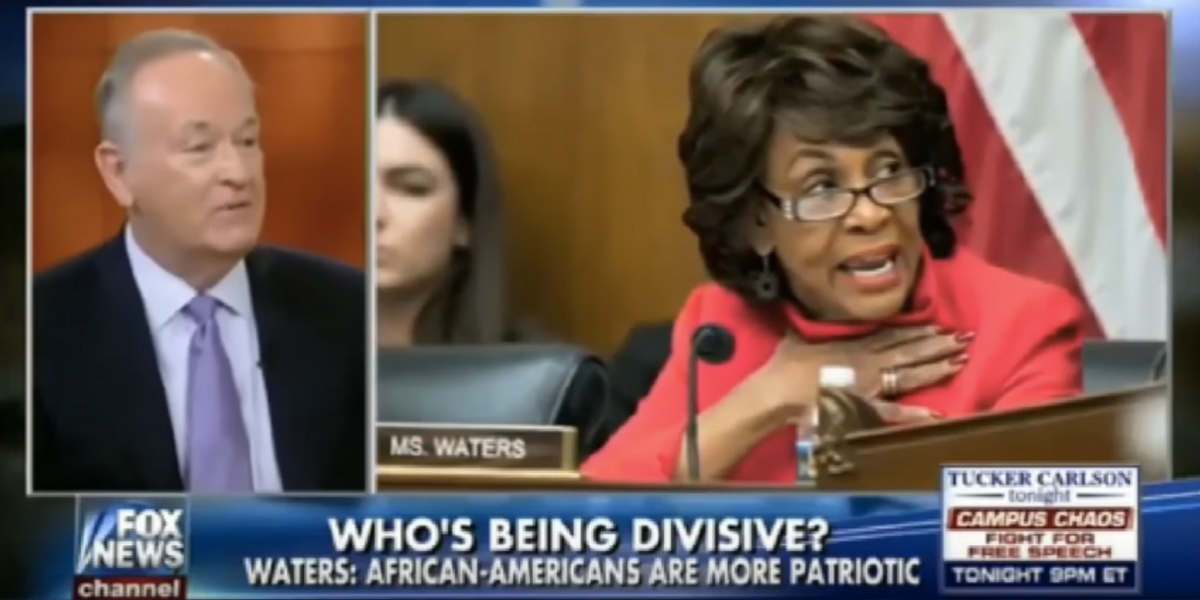 UPDATED: Bill O'Reilly Mocked Rep. Maxine Waters' Hair and the Internet Is Not Having It

Bill O'Reilly has come to his senses (or at least bowed to the internet for today) and apologized for his comments about Rep. Maxine Waters' hair.

"As I have said many times, I respect Congresswoman Maxine Waters for being sincere in her beliefs. I said that again today on Fox & Friends calling her 'old school," O'Reilly said in a statement. "Unfortunately, I also made a jest about her hair which was dumb. I apologize."

Commenting on a clip of Waters addressing Congress, O'Reilly says, "I didn't hear a word she said, I was looking at the James Brown wig."

Co-host Ainsley Earhardt then attempts a defense of the 78-year-old congresswoman, saying, "I have to defend her on that, you can't go after a woman's looks," before adding, "I think she's very attractive."

Ah, so close, but not quite.

"I didn't say she wasn't attractive," O'Reilly interjects, never wanting to be mistaken for anti-woman, of course. "I love James Brown."

Ol' Bill might've thought this clip would go unnoticed, as most of his work does, by the liberal masses, but the internet was quick to defend the storied congresswoman and drag O'Reilly to his grave:


Is this the most blatantly racist (and sexist) thing Bill O'Reilly has ever said on @FoxNews? https://t.co/WktyPiESvd pic.twitter.com/pCQVmOXVJs
— Matt Wilstein (@TheMattWilstein) March 28, 2017

Perhaps, like some on Twitter who rushed to O'Reilly's defense, you might be wondering, "Hey, what's the big deal? We make fun of Trump's hair all the time."


First, Trump's hair is objectively funny-looking. This is a non-negotiable, nonpartisan, all-American fact.

Luckily, Solange has already addressed this issue more beautifully than we ever could: