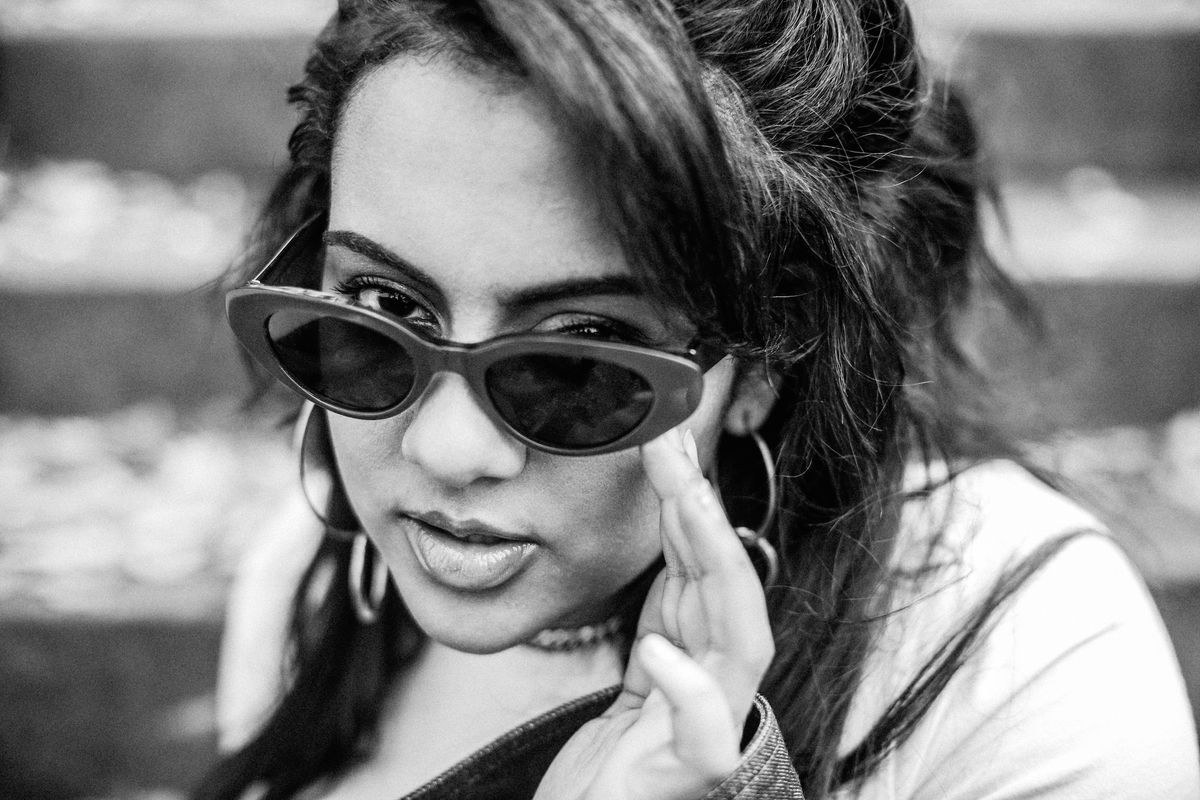 At 22 years old, Bibi Bourelly has already reached a level of songwriting success many artists can only dream of.

Two years ago, when she was just 20, Bourelly gained industry buzz after a studio session with Kanye West, arranged by producer Paperboy Fabe, resulted in "Higher," a scratchy, late-night love ballad for Rihanna's Anti. Bourelly wrote the song in just 30 minutes, after West locked her in a room with a beat and a microphone. Impressed by her skills, West also showed Rihanna Bourelly's song "Bitch Better Have My Money," which Rih ultimately released as a standalone single. Soon, Bourelly was joining the superstar on her Anti World Tour, performing her solo work for sold-out stadiums all over the world.

The self-professed "old soul" has also been featured on Lil Wayne's "Without You" and Usher's "Chains" in addition to co-writing songs for Nick Brewer and Selena Gomez. Last year, she embarked on her own solo project, releasing two EPs, Free the Real (Part #1) and Free the Real (Part #2). On these records, Bourelly easily swerves between vulnerability and swagger, rawness and confidence, whether she's singing about standing up for herself and fighting for what she believes in ("Riot") or being fired from Old Navy but still living "like there's moolah raining" ("Ballin'").

Currently, she's working on her debut full- length album (though she wouldn't reveal too much about it) and getting ready to go on tour with genre-bending rapper Lil Uzi Vert. Looking back at her impressive (and quick) rise, Bourelly stresses that "inviting people in" through music and expressing the things that are "too much to deal with or say out loud" are her real goals, rather than fame or fortune. "Making music is my life," she said. "I don't write with calculations in mind. I don't write to win. I don't sing to win."

You're on tour with Lil Uzi Vert -- how did that come about? Did you know each other before?

No, we didn't. I've always been a really big fan of what Uzi does, I think he's dope. I think that he represents innovation in rap and innovation even in trap. I want my music to be perceived as a merging of genres, as opposed to being boxed in and going on the road with the same people and the same type of music and the exact same demographic.

I've never thought in terms of genres. The entire idea of a genre of music is subjective, right? There's no rules in music. It's not like I can make a song a certain tempo and use certain instruments and all the sudden it becomes that genre. I just like good music.

Our generation as people, we have the potential to be the most boundless generation the world has ever seen. Because I grew up seeing a black president coming into office, I grew up with the legalization of gay marriage, I grew up with the legalization of marijuana, all these things that were so taboo became legal in my generation's time. So I think our generation, even just the evolution of technology, the fact that things we didn't even know were possible fifty years ago became possible in my generation, in my youth. So we have the potential to be boundless, especially in the artistic world. Because we have so many things that make creating easier. I think that we do have to work on expressing our individual points of view more. As artists, as opposed to following each other and following trends and following what's cool on Instagram and following what's cool on Twitter, we should follow our hearts, and put that boundlessness to use, that freedom that we have to use.

Where did that independent spirit come from?

My father definitely influenced me a lot. I was taught where happiness comes from. Happiness comes from self-fulfillment, and the fulfillment of one's spirit. It doesn't come from anything materialistic... I'm not trying to sound like some preachy bitch, by all means smoke the fucking weed, God knows I'm a sinner. But I have the desire to be happy and to be inspired and to feel fulfilled. I know what it's like to feel fulfilled in general, and I want to continue to feel that way. I don't want to sell myself short. It feels way more to feel like you're contributing to this planet. When I decided that I wanted to become a professional musician; I always knew that music was inside of me and I always knew that this is what I was going to do. But the older I got, the more I started to realize that the reason I wanted to do this is because I see magic in it. You get inspired, there's life in it, there's life all around us that I see and I'm aware of and that I'm tapped into it. And my way of spreading that life and inviting people into my life is through music... I have dreams bigger than any fears that I ever felt, or any love that I ever felt. That's what keeps you going, and that's what differentiates between someone who follows them and someone who doesn't. It's just the capacity for love in your life. I don't know if that makes any sense.

How do you feel about your role as an artist?

My role as an artist always has been and always is to convince people of their freedom. To enlighten people to their freedom. To be vulnerable. To me, what an artist is is somebody who has to express the things that they take in. So I'm naturally a product of my environment, like every other human being in the world. But the thing that makes me an artist is my need to express what I'm around and what I take in. And to be a direct reflection of whatever is happening in my heart or in my brain or in the world, through music.

This is gonna sound corny, but I'm gonna say it anyway because it's the truth. Songwriting is a lot like magic, and the reason I use that word magic is because you can't express it or describe it. True songwriting is very primitive, it's not anything that is calculated. If you are born a songwriter, you are born with the necessity to express the things that are inside of you. There is no other way. I've learned the skills as I've gone on, but it's inherent. It's just tapping into and tuning into whatever it is that I'm feeling and saying what I'm feeling, whatever way it comes out. My true feelings, my true hope, my true emotions. Songwriting is my spirit, it's my soul, it's subconscious. Its all the things that I'm pushing away from my conscience because it's too much to deal with or to say out loud. Things I don't have the words to express. That's what comes out when I write a song.

Does it feel different when you're writing a song for someone else?

No, it doesn't. There is no difference between when I write for somebody else. I'm a very complicated, layered individual, just like everyone else. Just because I can write in different genres and different styles doesn't mean they're not different versions of me.

I've written for so many people, I've written for Selena Gomez, Rihanna. I don't know what's gonna go on the album. A lot of times the artist's team comes for me and has to fight me for the record cause I don't want to give the record away. My love for music is so developed and it's so passionate, that it's just my life. Making music is my life. So of course it's difficult. I don't write with calculations in mind. I don't write to win. I don't sing to win. It gets frustrating because sometimes when I do interviews or even dealing with suits behind the scenes, everybody approaches the artist with the assumption that I'm creating or making things to win. And it's really just done solely because this is what I do. And I happen to be successful at it. But this is what I love, I've given up everything for this. People talk about it like it's this magical success story, like it's so hard to believe, all the sudden this girl has some success in the industry. But it's the only thing I do, it's the only thing I've ever done in my entire life. This is it. This is all. This is what I live for. Take this away from me, I have nothing.

You might just be more authentic than most, to be honest.

Thank you. But also, that scares me, because it's my goal in the music industry to recruit authentic artists. It's important for us to be real. That shit actually matters. It matters to the world. When you look back, fucking fifty years, Janis Joplin, Jimi Hendrix and Kurt Cobain, and Notorious BIG and Tupac, all these people that set these standards and the rules, they challenged the culture. They didn't try to fit into shit. They challenged what was happening in society and what was happening in the world. It required the public to challenge culture and challenge themselves and challenge the government and social norms. Right now we are not challenging anybody. Obviously we have Kendrick and Odd Future and stuff, but I want it to be like it was in the sixties. I don't know, maybe that's old soul shit.