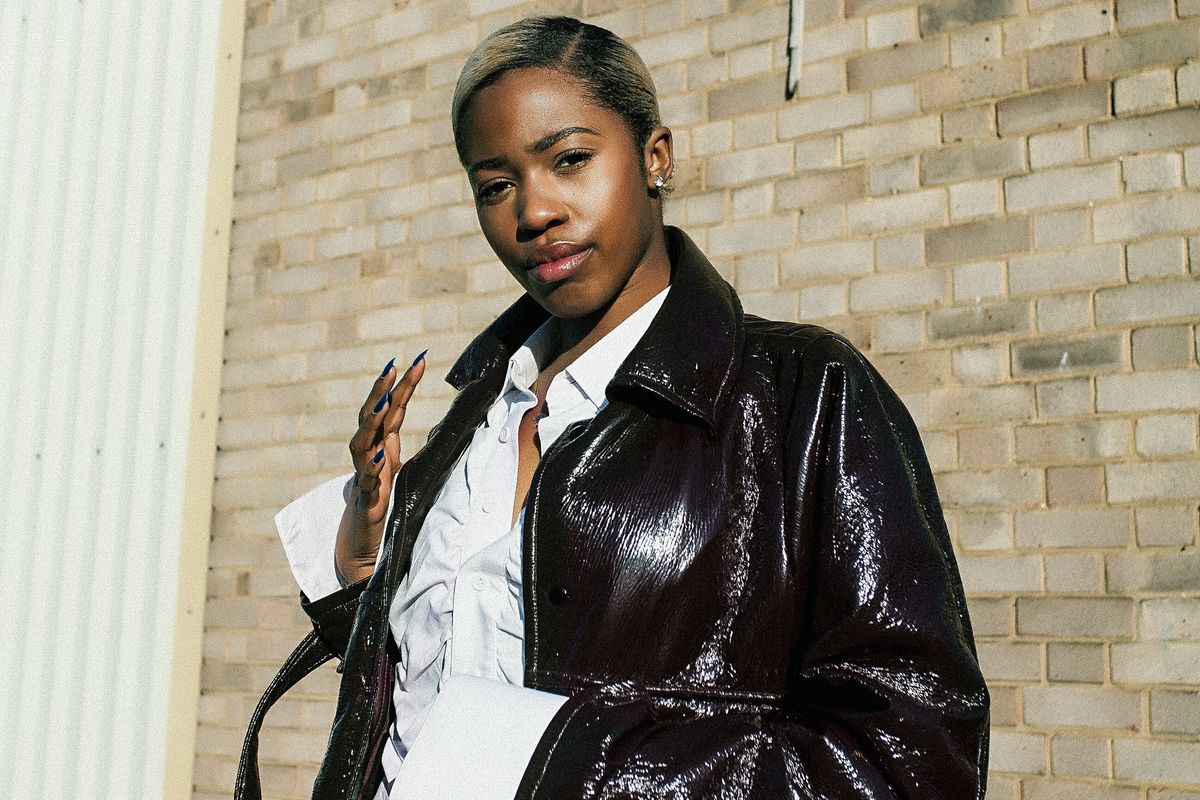 Bianca Saunders isn't interested in staying inside the lines. Though the London-based designer promotes her line as menswear first, Saunders' designs live in the cross-section of gender and sexuality, race and expression. There's an inherit politicism to her work, though perhaps a politicism that exists in the work of any artist pushing the boundaries of cultural understanding. With her deconstructed shapes and innovative designs, Saunders uses fashion as a mode of play to challenge our own stereotypes of what menswear can be. Saunders's third and largest collection presented earlier this month at The Truman Brewery in London. PAPER sat down with her to discuss the new collection and how she's found her space as a woman in a menswear world.

Can you talk a little about the genesis of your line and your background in design?

I started my brand off the back of graduating from the Royal College of Art. I did a masters in menswear design in 2015 - 2017 and before that I was at Kingston University studying fashion design, but I spent the majority of my degree doing womenswear then. My mentor Andrew Ibi encouraged me to try menswear. From there everything made more sense. I felt like I found my style more.

I become really interested in exploring my own identity after seeing the exhibition "Return of the Rude Boy" at the Somerset house. It was great seeing part of my culture in a prestigious institute. I think this was the turning point that made me want to continue to look at what was around me instead of things that I'm far removed from. I wanted to shed a light on things that weren't documented enough in fashion. I think it's best to be inspired by what's around than try to over-seek something that's not actually there.

How has the London creative scene impacted your work?

There's a great creative vibe here. It's all focused around this Club East London culture where I've met a lot my creative friends and past collaborators. London's quite a small place, so I know the majority of the emerging designers. We're going through a similar struggle as young designers so we can bounce off of one another for help.

Is there a divide in conceptualizing Black masculinity in London/the UK vs the US?

I think it crosses over a lot in the age of social media. I am able to see it more. When I first started exploring Black masculinity it was because of conversations I was having with friends. There was a wave of photography that was talking about it on social media, but I felt it had become very narrow. I feel like there are a variety of ways to show how masculinity and Black masculinity can be challenged with clothing.

I think there's this idea that in order to defy stereotypes you have to go in this complete different direction and a lot of the time people exist in that space in between. You can show that it doesn't have to be just a duality. Can you talk a little bit about that?

Compared to womenswear there's not that much of a spectrum in terms of identity references. For example, with Phoebe Philo when she first started designing for Celine, she brought this androgynous figure back to fashion and made it a thing that a woman in a slouchy suit and a saggy fit is okay and it doesn't have to be a skirt or a tight fitted dress or something that's over-the-top and glaring in color. I feel like with menswear I wanted to create my own conversation with aesthetic where it sits in between. It kind of looks like it's unisex, but it isn't. I think that's why when people ask me "Is it unisex?" I say no because I want to establish the brand as being menswear first and then everything else comes after.

You were saying with this collection you want it to be more formal. How do you imagine people wearing it? Is it still streetwear worn throughout the day or is it eventwear?

Wearing throughout the day. You know, I think everyone is dressing quite formal now. You'll see a girl on the street in an oversized blazer and a slouchy jean. People are wearing suits casually now. I'd say my brand is moving towards elevated luxury.

Do you think a lot of that formal influence comes from your friends and seeing their style?

I think it's how I dress as well, but mostly influenced by how my male friends dress. But also, I want to wear the collections too. I want to look good wearing it. I don't want to have pieces where I'm not too sure about them and think that they won't look cool on anyone besides the guys in my show. A lot of the design details are from gestures of body language, so how guys move unintentionally in their clothes and how they expose their skin. That's how I get a lot of my ideas. And being slightly uncomfortable, so a lot of the techniques I use create things that are slightly scrunched.

Do you have a muse?

It's never just one person. My friends are my muses. My collections are usually combinations of them and different style aspects.

How do you research what looks the most natural and what makes the most sense with men's bodies?

Honestly just by observing people. My first collection was based around a my friend Corinne and usually in the club, he's quite skinny, so he'd wear straight Rag & Bone jeans and belt it up and it would be almost like a paper bag. So ideas like that I tried to bring into this collection. Not full looks as much as self-styled with a bit more intention.

When I went to New York there was this guy that was walking and I took a picture of him from afar because I just really liked the way his clothes looked. He was wearing this oversized shirt and then had this vest that was on top of it and it just squeezed everything in and it was so cool the way he moved in it. One of the sides of the shirt was a bit too high, and that was an inspiration I used in this collection.

So much of your line is about exploring gender and race roles. How do you feel your brand operates in the commercial world where the intention behind your work might be removed? Do you lose a sense of control or agency?

Not at all. I feel very much in control of it all. I see my work as a point of conversation to get people thinking beyond the clothes. I think that's why I try to show the extent of my research through film to really expose how multi layered it is. My favorite thing is seeing a variety of people tag my brand on Instagram whilst wearing it out or trying it on in the changing room. That's what makes me feel very fulfilled. I want everyone to enjoy a piece of my brand. Not every customer cares about the concept, they just want to look great and wear clothes that fit them. I'm fine with that.