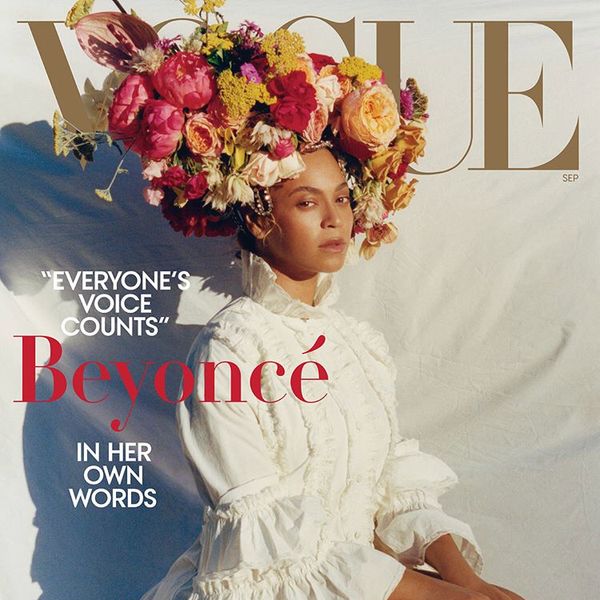 After months of chatter and breathless anticipation, Beyoncé's September Vogue cover has finally arrived. Shot by 23-year-old photographer Tyler Mitchell, the images are bright, airy, and full of flowers. Two official covers have been released so far. They are beautiful.

Vogue on Instagram: “@Beyonce, in her own words, gets real and raw about body acceptance, opening doors for the next generation of artists, her own family…”

News of Mitchell's hiring broke last week. He is the first black photographer to shoot a Vogue cover in the publication's 126-year history, and has previously shot covers, films, and campaigns for the likes of Fader, office magazine, Givenchy, and Marc Jacobs. "I depict black people and people of color in a really real and pure way," he told the New York Times last year.

Beyoncé was given an unprecedented amount of creative control for this Vogue cover, her fourth. She has written her own cover story. In an Instagram caption, Vogue said the artist "gets real and raw about body acceptance, opening doors for the next generation of artists, her own family ancestry."

"I think it's important for women and men to see and appreciate the beauty in their natural bodies," she wrote. "That's why I stripped away the wigs and hair extensions and used little makeup for this shoot. To this day my arms, shoulders, breasts, and thighs are fuller."

Rihanna has also made waves as the star of British Vogue's September issue.

@badgalriri on Instagram: “September issue of @britishvogue, styled by @edward_enninful and shot by @nick_knight, on newsstands Friday August 3.  Wearing a @prada…”