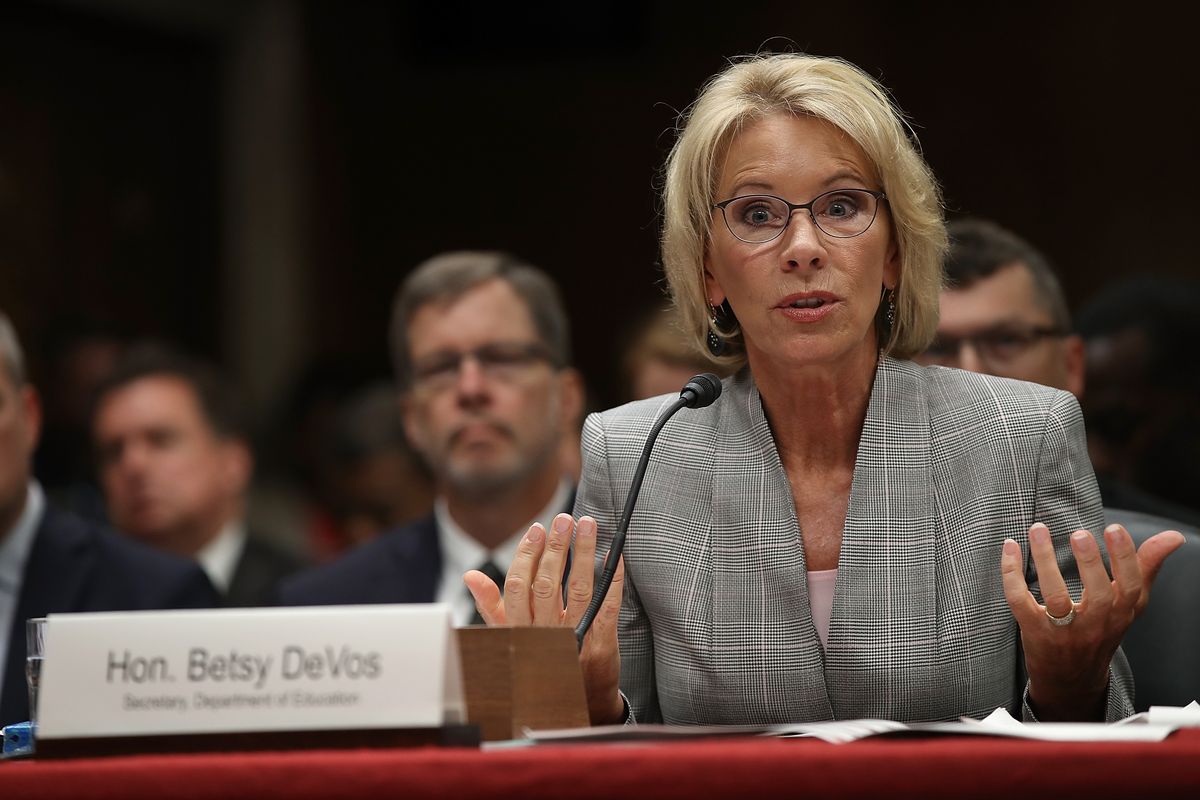 The guidelines, released by the Office of Civil Rights, are known as the 2011 Dear Colleague Letter, and required schools to lower the "beyond a reasonable doubt" standard of evidence that criminal courts must meet in prosecuting a case to a "preponderance of evidence." These guidelines were in line with studies showing that sexual assault is common on residential campuses, false reports of rape are rare, and rape is both incredibly underreported and also rarely prosecuted.

Colleges often encourage student victims of assault to use their own internal reporting systems rather than contacting police; this can result in messy situations for survivors as the procedures for dealing with assault differ from school to school, and victims can be forced to live and study in close quarters with their attackers.

The Education Department, led by Betsy DeVos, also rescinded the 2014 Questions and Answers on Title IX Sexual Violence. They replaced it with their own interim Q&A on Campus Sexual Misconduct that allows schools to use "the evidence standard or a clear and convincing evidence standard."

In July DeVos met with sexual assault survivors, university administrators, people wrongfully accused of assault and men's rights activists as part of her research in crafting a new policy that would end the "era of rule by letter." She's been a vocal critic of Obama's policies since she took office, putting the focus back on protecting the accused rather than victims of assault.

"If everything is harrassment, nothing is," Betsy DeVos said earlier this month.
(via @HBO) pic.twitter.com/X0V5DGrPA2
— VICE News (@vicenews) September 22, 2017

"This interim guidance will help schools as they work to combat sexual misconduct and will treat all students fairly," DeVos said in a press release. "Schools must continue to confront these horrific crimes and behaviors head-on. There will be no more sweeping them under the rug. But the process also must be fair and impartial, giving everyone more confidence in its outcomes."

Advocates for survivors of assault knew the repeal was coming. Know Your IX Manager Sage Carlson told Jezebel earlier this month that undoing the DCL is a huge step backwards. "We are hoping that they'd be willing to work with us on actual worries that survivors have, or actual things that survivors have about Title IX not being upheld on their campuses, and how they can help, but instead we're just hearing that there are two sides to a story, a narrative that this administration has pushed often when it comes to experiencing violence and oppression," Carlson said.

"The reason why the DCL exists is because it was supposed to remind schools of what their obligations are under Title IX and give concrete examples of what that looks like," End Rape on Campus co-founder and Director of Education Sofie Karasek told Jezebel a few days before the repeal. She said the guidelines helped schools "be in compliance with Title IX and to provide equal access to education for your students."

Title IX is a federal law put into place by Richard Nixon, and DeVos doesn't have the power to completely eliminate it. However, eliminating the DCL may lead to weaker enforcement against sexual assault on college campuses, which became a key component of the law after the Obama-era guidelines went into place.

"What is the impact of this going to be on students, who all of a sudden don't know whether their schools are going to be tackling campus rape as hard as they were before?" Karasek said to Jezebel. "But maybe they weren't even doing much of anything, so now there's really no incentive. It sends a message to schools and survivors and to other students about what matters and that's evidently not survivors."

Betsy DeVos is about to make campuses less safe.

Today, the Trump administration put the concerns of abusers over survivors. Again.