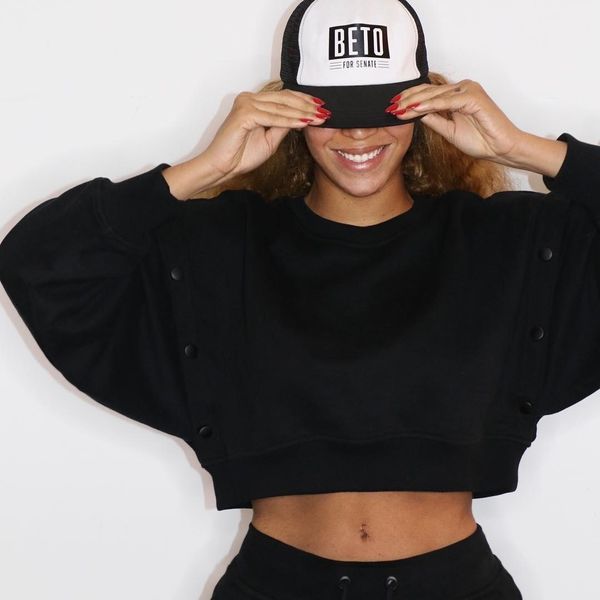 Will Beyoncé Endorse Beto For President?

800 million years ago, otherwise known as November last year, former congressman Beto O'Rourke ran against Ted Cruz as a Texas senate candidate. He lost the election, but gained a new fan: fellow Texan Beyoncé Knowles. On midterms voting day, Bey shared three separate images of herself wearing an official Beto snapback with her 126 million Instagram followers, alongside a supportive message for the politician.

Now the question is, will Beyoncé stick with Beto during his newly announced presidential run? It is objectively pointless and also absolutely too early to speculate about this, but speculate we must. Beto's Beyoncé endorsement was a big deal! Especially in Texas, which Donald Trump won by a nine percent margin in 2016.

Beyoncé has supported Democratic presidential candidates in the past — Obama, Clinton — but only after they'd secured their party's nomination. If Beto somehow emerges from an already crowded field to do just that, we can probably assume Bey will endorse him publicly once more. He'd be going up against President Trump, after all. 2020 is kind of a do-or-die year.

But would Beyoncé prefer Beto over his 14 current rivals? Would she donate to his campaign? Maybe not. It's a diverse pool at the moment and, especially when compared with Elizabeth Warren, Bernie Sanders, or Kamala Harris, quintessential straight white Gen X dude Beto doesn't come across as a particularly revolutionary candidate. He is also yet to outline any major policy platforms. Bernie Sanders and Joe Biden are currently closest to securing the Democratic nomination, according to (very) early polling. Beyoncé for Bernie would be truly wild.

It's worth noting that celebrity endorsements don't always do much — Hillary Clinton had numerous extremely famous people campaigning on her behalf, including Beyoncé, who performed at a pre-election day rally to apparently little effect.

If it really does come down to Donald Trump, Beto, and his reluctant black labrador Artemis, well. Let's just hope Bey doesn't leave her Instagram post until the last minute, like she did last time.