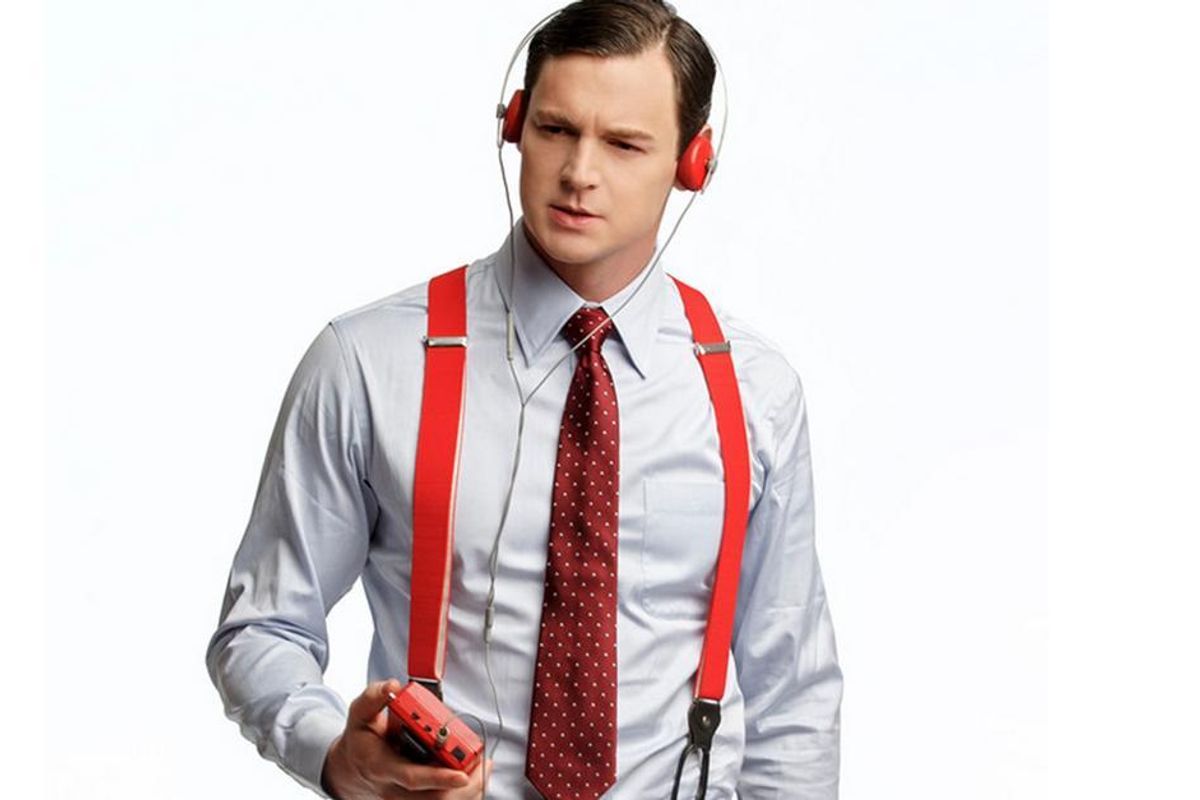 "Were you in the same circles and had his same characteristics, chances are you'd behave in the same way."

All the good and bad of the 1980s infuse the plot of American Psycho, the Broadway musical based on the Bret Easton Ellis novel about investment banker gone awry Patrick Bateman. The show -- with a Duncan Sheik score that's influenced by house, techno, and electronic sounds -- comments on the glitz, narcissism, and yearning of a bolder decade. Playing the lead role is Ben Walker, the Georgia-born 33-year-old who's known for Broadway's Bloody Bloody Andrew Jackson and movies like Abraham Lincoln: Vampire Hunter and In The Heart of the Sea. As he prepares for Psycho's April 21st opening night on Broadway, I talked to Ben (who, by the way, is married to Kaya Scodelario, his costar in the upcoming film The Moon and the Sun).

Hello, Ben. For those who haven't seen the show yet, what do we learn about Patrick's potential psychoses?

The play leaves you with questions, but they're important, illuminating questions. I don't think the ending is frustrating. Any way you look at it is justifiable. I feel small plays and stories have morals and put bows at the end, and we're trying to make something a little more complex and bigger than that.

Are you onstage pretty much the whole time?

Is there a lot of pressure on you or is it effortless by this point?

I'm really lucky because we have a great director, script, music, cast, and producers. I certainly have nerves, but my job is becoming just not to screw it up. All things are aligning nicely.

Was it difficult to learn the part?

Yes, it's difficult, because tonally, it's a difficult show to finesse. It's the work that needs to be done and I don't mind doing it. I trust the creators, and if they want to tweak something, it's my pleasure. That's what previews are for, especially when you do something so new. It was done in London and then in a workshop. Now it's in a big house on Broadway and it's exciting that they want to continue to tweak it and work on it. I enjoy that process.

You were barely alive in the 1980s, but do you have a view of the decade's excesses or triumphs?

I was pretty young, but I remember the idea of "We already have the color pink, so let's make it neon." That's an exciting idea -- how can we push it, make it louder, make it brighter and more interesting? It's easy to go, "God, the '80s, they were crazy back then," but that's the trap you continue to fall into in history. It seems like a really exciting time, particularly musically. They were making new sounds. It was a curious and ambitious time -- also a greedy and vain time, but at the same time an exciting time.

Is the show's tone cynical throughout?

How do you humanize Patrick?

I'm playing him, so it's easy for me to say, but I can't deny that everyone has a bit of Patrick Bateman in themselves. Were you in the same circles and had his same characteristics, chances are you'd behave in the same way. We like to look at people and make them monsters, make them other than ourselves, and I think that's dangerous, that's how we get into trouble. We don't understand how to take care of each other and how to stop creating monsters.

You've successfully gone back and forth between film and theater. Is that how you like it?

Yeah, I enjoy playing ping pong between both mediums. It's creative people I want to work with and learn from and frankly steal from. [Laughs] If I find a great director or writer and they happen to be writing a great screenplay, I go with that.

Why did you become the go-to guy for playing wacky presidents?

I really don't know. If they're looking for someone to get covered in blood, it's "Get me Ben Walker on the phone." I'm the go–to guy, and I'm fortunate.