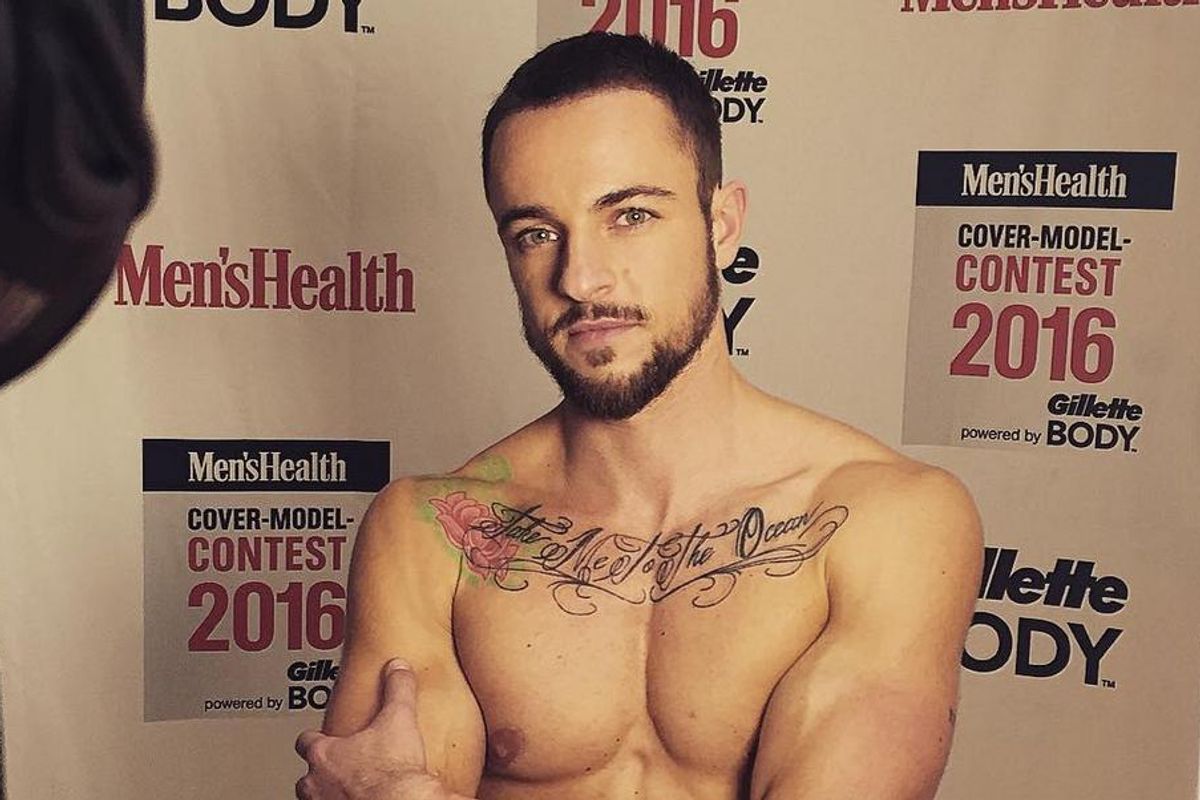 Earlier this year, German model Ben Melzer made headlines as a finalist for Men's Health Germany's "Ultimate Guy" cover star contest -- but for more than just his biceps, as his win made him the first out trans man on a European men's fitness magazine cover. And while he may have not made the wide-distribution cover, Melzer did join the other finalists on a special collector's edition that stirred an international conversation about trans visibility -- and looked damn good doing it.


The issue, which is on European stands now, also gave us a good reason to chat with Melzer while he was recently in New York about everything from his Calvin Klein aspirations to inspiring others. Read the full Q&A below to learn about navigating traditional ideas of quote-unquote masculinity, his journey to the cover, as well as what exactly his win means for trans men everywhere.


So I guess the place we should probably start is your journey and the lead-up to Men's Health. Tell me a little about growing up.

I realized that I was different...when I was three or four years old. I didn't know what it was, I was just acting different -- not like the other female kids, the girls. At the age of 16, I asked myself, "Is this how it feels when you're lesbian," because I was attracted to girls -- but always to straight girls. And I could easily answer that question that I was not a lesbian. I felt totally straight, like a straight guy -- which was weird for me, because I had a female body. I always had short hair, and I was wearing boy stuff, and I acted like a boy, but I had this female body I didn't feel comfortable in.

So what was your first exposure to the concept of being transgender?

I had no idea until I was 18 years old. When I was 18, I saw an interview on TV about being transgender, and after every point I could make a check -- like yes, that's me. I finally had my answer and I knew what was [going on] with me, because I felt like I was the only one in the world feeling that way. It was totally weird...I told my mom and my dad at this point, but I wasn't strong enough [to go forward]. We did some research and saw all of the photos of the surgery, and it scared me. I cared too much about what the people around me would say -- so I waited another 5 years. But then I was injured, so [I wasn't able to work out for a while] and sport for me was a way to get rid of the pressure in my head -- thinking about the transition and things. Then I saw another TV interview about being transgender -- I was 23 at this point, and that was my point of no return. I wasn't able to [live how I was living] anymore, and I didn't care anymore. I didn't care what people would say. I was like "This is me, and I finally want to go this way. I really want to live my life, and I'm going to be a cool guy. And all the girls, all the guys laughing at me now, they'll want to be friends with me when I'm finished with all that." That's what I told myself, so I told my parents again. My mother -- she's my biggest fan; she was supportive from day one. My father was a bit difficult, because I wasn't his little girl [anymore]. I looked like a boy all the time, was acting like a boy, and he was scared, which was different [from] my mother. The psychologist needed to tell him that it wasn't just a phase. But after the psychologist said "it's real," he was supportive too.

So it took an expert opinion?

Yeah. He needed it. He was scared, also.

So why fitness modeling? What got you started?

Well I don't want to call myself a fitness model, I would rather say model, but that was the start for me. I always looked up to men on the cover, no matter if it's a fitness model or a fashion model -- I just thought that I should be on the cover. So I did some research on Google, and I found the Men's Health magazine cover contest. And then I was like "Okay, think about it, think about it and then just do it!" Thinking about it was important for me, because it was very clear that not everybody would like me and that they wouldn't all send me positive vibes. [But] I decided to do it because I was entirely at peace with it, like I didn't care what people would say. It's important for me that the people around me, the people I know, like me. What they say can hurt me, but not what somebody sitting behind their computer, a thousand miles away says...I don't care about that.

Speaking of the competition, when it comes to fitness modeling, a lot of people tend to think of it as this hyper-masculine, ego-centric sort of thing. What were the other models like?


[When the competition first started I] was like, "Wow, there are some machines in the room." But it didn't feel like a competition, we were all very nice to each other, and it was a very, very cool atmosphere. Some of them had no idea about my past -- that I'm a trans guy. Some knew, but when they saw me, they didn't believe it -- and they were very curious, but in a respectful way. They asked me a lot of things, and I guess it was easy for them and easy for everyone to handle, because I'm very open. You can ask me almost anything. I don't get mad about somebody asking things because I think it's important to educate, and to open up their minds. To make transgender, like, normal -- to have them know that it wasn't a choice.

Yeah, visibility is essential. Was it intimidating when you first met the other contestants of the competition?

I felt a little weird. I was scared, just a bit, but I never showed it. [I was nervous] because...they look so good! Like "Oh my god, it isn't even possible for me to get the cover"...I am just like a normal guy. I'm always like "Oh, he was bigger biceps, and he has bigger pecs," that was the way that I was thinking. But they were all so nice to me.

You're pretty active on social media. Has it also been pretty supportive? Have you gotten any stories of people reaching out and being like "you've helped me?"

Yes, a lot. [One guy] told me that at the age of 50, "You are the reason I started my transition. Thank you for that." That really touched my heart. I keep those messages, and I want to print them all one day and put them into a book just for me. Also, not only people with the same story, but also parents -- they send me messages like "What you give us now, no doctor can give us the feeling that you give us." They saw me on TV or heard me on the radio when I said "everybody is looking for a hero. If I can be the hero for just a little kid then it would be amazing, but in the end you just need to look in the mirror because the hero is standing right in front of you," because nobody will help you. A mother sent me a message that said "I showed my son his little hero today, thank you." I really feel this, you know?

Have you had to put some things on the back burner to appease long-ingrained societal ideas of masculinity?


[My love of fashion.] Some people ask "Is that the little girl in you, that you love fashion?" I'm very vain! I'm vain when I take care of myself. I don't go out without looking in the mirror. But just because of my past, people are like "Is that the little girl in you?" But I think that it has nothing to do with gender or sexuality -- I'm just shoe-addicted. I love shoes, I really love shoes.

Oh, totally. I love glasses, and bags. I love bags. I'm so into fashion, and I live for that. But I'm not into math, you know? I fuckin' hate it. We all have something we're addicted to, and for me it's fashion and fitness, and lifestyle. That's what I love.

So are you trying to transition more into fashion modeling?

Yeah, that's what I would love to do. My future, my life goal, would to be a Calvin Klein commercial. Just wearing underwear, because you need to accept your body. And you need to transport a message -- and you can't transport that message if you don't feel comfortable. You have nothing but your skin, and this underwear. I want to open doors for others, so they don't have to live in stealth. [Let people know] they're able to achieve their dreams if they go after them. I did a post on Instagram saying "We all have [style], and a lot of us have really nice style and we don't need to hide that just because of our past and because of our story." Some people, they hide, and they don't want others to see them. Like when you wear special clothes and you look a bit different from others, people will look at you. I don't care...I mean look at me, I feel good! And I'm the [person] that I want to be today.

Do you have anything you'd like to add? Something to tell other people beginning their own transitions?

I just want to say to others, be patient. Also with the people around you...Because when I started my transition, I always got mad when my mother said something wrong. Like "she." But I forgot about that it's not easy for parents. They're used to calling you "she" and by your female name -- and then you want them to switch like this [ snaps]. It's not possible, so be patient. And it'll get better.