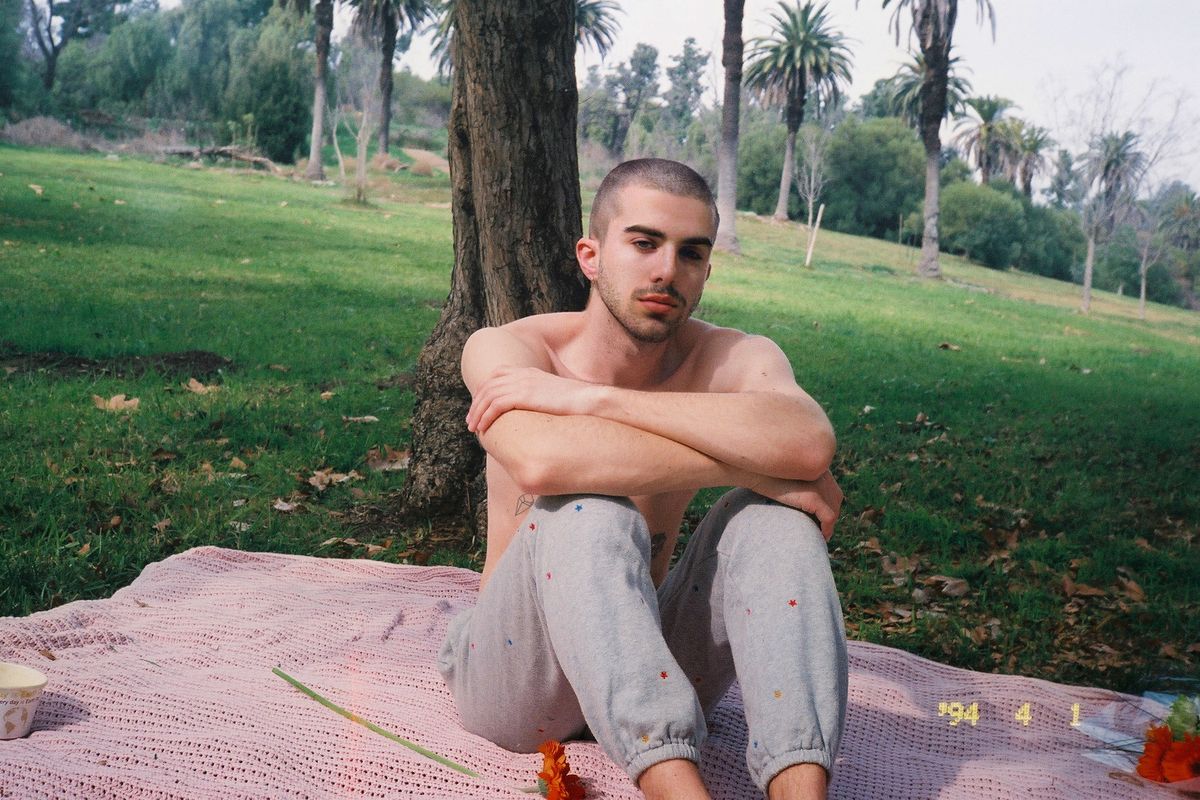 Through the boring white middle class suburbs of South Charlotte, North Carolina, the artist Ben Evans used to drive to high school every day in a bright orange Hummer. He says the gesture was unintentional, but looking at his artistic practice now, it's hard not to see the vehicle as a statement. It sure stood out in the senior parking lot — I remember, because we were classmates.

Now based in Los Angeles six years later, the Pratt alum continues to rebel with color and camp through his painting practice. These days he has a much more receptive audience. The artist's journey recalls that of queer, creative kids across the country who not only assert their difference but wield it. To paraphrase Baldwin, they walk on the earth as though they have the right to be here.

Related | Is Britney Spears Getting Her Own Art Show?

On a Sunday evening days before the opening of "God Bless Ben Evans," his second show at Guy Hepner Gallery, Evans and I caught up for a candid conversation about images as language, camp as a genre and how we self create definitions of home as we grow up.

How is the world treating you and how are you treating the world?

Great question. I truly feel so beyond blessed. I think I really like when I try to take a step back and see my life from a third-person perspective. I live by myself, I pay for all of my own things, I'm able to support myself as an artist. And I think the world has been so kind to me. I think I used to get caught up on feeling like I deserved stuff because of my life when I first came out — I was so young and I was outed in an email from my best friend's mom and I felt this overwhelming feeling of, I deserve this shit because people treated me like shit. But I think I've been learning that I don't deserve shit — and realizing that old way of thinking just wasn't conducive. Like, sit down and check your privilege, because so few people can get to this point. I feel like the world has been very good to me and I still have a lot of growing to do. And how I'm treating the world? I'm recycling, so that's good. I just truly love everybody.

What does home mean to you? How are you building new definitions of home in New York and LA?

Home is such a loaded thing. The thing I always think about when it comes to Charlotte, North Carolina [is that] it's really loaded for me. When I moved to New York I realized the lack of culture in Charlotte, I just felt there was no cultural identity. There was no place I wanted to gravitate towards. There was no queer community there at all and it was just really dark, thinking about that home.

I thought I was more chill with me being gay than I was, but when I got to New York I got into a relationship so quickly and I caught myself being so nervous of holding his hand in public. There was just so much of my own baggage.

It's nice that I don't have to go back to Charlotte because I think there are just a lot of triggering things for me there. I think also growing up in the church, it was a lot to handle. When I left Charlotte I was so mad at God, and weirdly enough I was able to find this new spirituality for myself. I think there was this weird camaraderie at [our high school] that we built that allowed this great energy to come out because, wow, we hate this right now and are overcoming these circumstances. I fully am so grateful to have grown up there. I don't think I'd be where I am without it.

In what ways are you expanding or adding to the genre of camp in your work?

The work now is work that I'm proud of. I put my name on it very proudly. I think as far as camp goes, I am a just little twinky gay and I love these female icons. I love Goldie Hawn, I love Death Becomes Her more than any movie in the world, I love the glamour of it. I think I had this really big epiphany when I was speaking to my friend that when I'm watching these things I'm watching the women, and I am so infatuated and in love with these iconic women.

I think I want to create a campy space that feels not super serious but is so sensitive. I just have the utmost respect for these women, for these icons, and for me being in this space. I think campy and tongue-in cheek is the space I feel most comfortable. I feel like in high school I was masking my femininity and I just feel so much more free now. I think this new work is me living in my camp fantasy.

Who are you birthing or burying in your work?

I had this really great conversation with a friend, Lauren Chanel Patrick, and she said she wants to do one thing in her career: coin the new art era. And she said that she thinks it'll be called the "new age of aesthetics." And I fully agree with her. I think we're in this post-modern digital age and there is so much imagery that's being filtered through our system. That we are living in an age of pure aesthetics. So if I'm birthing something, I think I'm trying to birth a language of images that are important to me. That really represents things that are important to me, whether it be the furniture inside a house or the color of a wall in the back of a portrait. I think this image vocabulary that I'm building is becoming an extension of myself and I want to create my own language with my art.

I think about how Tumblr informed so much of high school for us.

All I wanted for two months — hell, two years — was to be famous on Tumblr. I just wanted one photo set to go off.

Also, we were obsessed with Lana Del Rey in high school.

What do you mean? I'm still obsessed with her.

What are things about the South that you miss?

It's just such a love-hate relationship, and you know exactly what I'm talking about. I think what I miss about the South is my ability to be anonymous. And I think in these cultural hubs that we live in it is harder, I'm not even saying on a fame level.

Everyone knows each other here...

Yeah, I think it's hard to take a step back and be out of it for a sec, and I feel like in the South you can disappear. Which is nice sometimes.

I miss Bojangles often, we don't have one here.

Mmm, agreed. I do miss the food.