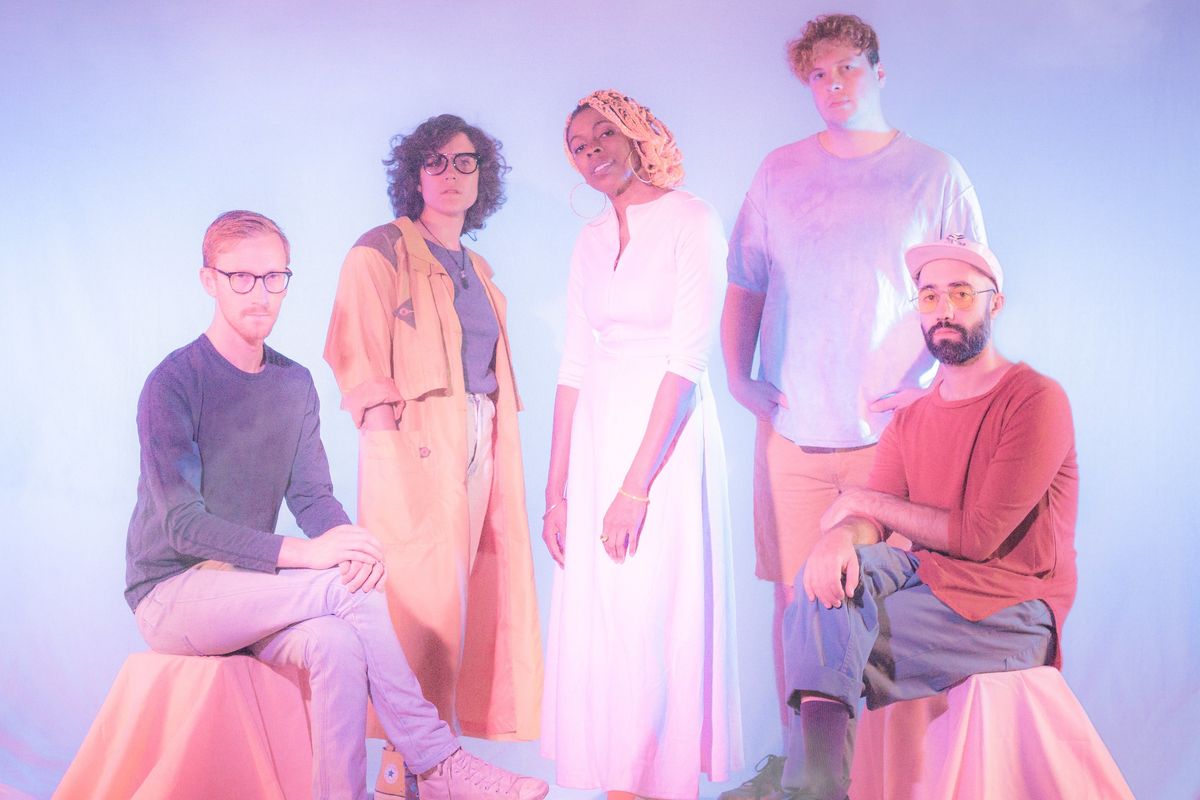 Bells Atlas on Their New Album, Oakland and Science Fiction

Bells Atlas is a psychedelic pop band whose sound is located somewhere between heaven's gates and the inside of a video game. This kind of contradiction is their calling card. On the five-piece's new album The Mystic, which PAPER is sharing an early stream of, Bell Atlas strips Afro-pop, jazz, hip-hop, electronic and ambient music for parts, using them to build a softly colored soundscapes that are equal parts angelic and mechanical.

Moments on Bells Atlas' new album feel like drifting in space or the sea, but don't make the mistake of thinking their submersive music is watery. Intricate instrumental detail is hidden under a guise of ambience. The band expertly crafts meditative grooves worthy of Solange, but lace them subtly with off-kilter, kaleidoscopic discord, reminiscent of a band like tUnE-yArDs or Dirty Projectors. Woven into the body of each glowing song, is dissonance: glitchy synths and beeping, guitar wails, muscular bass-lines and propulsive drums. The effect doesn't put you to sleep, but rather, dissolves you and transports what's left to new world.

This gravity-defying, yet snug, intimate universe is built through vocalist and lyricist Sandra Lawson-Ndu's both deeply personal and expansively philosophical storytelling. Lawson-Ndu is a Nigerian-American woman raised in the Bay Area on Christianity and science fiction. However, her life became increasing shaped by mystical spirituality and discourses of mental illness — particularly at the influence of one friend, whose struggle with mental health inspired much of The Mystic. Lawson-Ndu sings about hurt and hope with remarkable compassion, in an abstract spiritual language that draws on prayer, ghost stories, science fiction and self-care.

As far as the style and method of their music, Bells Atlas have much in common with pop experimenters like OSHUN and Ava Luna, but Bells Atlas' irreverent embrace of contradiction — ambience and discord, spirituality and science, one woman's intimate experiences and five people's musical synergy — is all their own.

PAPER chatted with Sandra Lawson-Ndu as well as guitarist Derek Barber and bassist Doug Stuart about The Mystic's inspirations and coming up in Oakland.

What is the story you want to tell on The Mystic? What ideas or experiences were you processing on it?

SANDRA LAWSON-NDU: The Mystic is inspired by a connection to the person in my life who sparked my love for storytelling and interest in both the mystical and the fantastical. In my eyes [this person] embraces intangible realities in beautiful ways. When they began to struggle with their mental health, they held that magic as a truth-seer and a storyteller. This narrative exists in some of the songs, but it's really the questions that resulted that are the basis of many of the stories here: what expressions needed a diagnosis? What caused pain versus what was the result of a different way of interpreting life and offering new paths of seeing? What was clinical vs mystical? How do we make space for each other's beliefs and varied lenses of experience?

How do you navigate the ideas/visions/experiences of a 5-person group Is there one principal songwriter?

DOUG STUART: A lot of the songs on this record started from a drum loop, and the basic framework was built on top of these loops, by 2 or 3 of us in a bedroom studio. From there, we made sure to get everyone's instrumental voice as an overdub on top of the framework that was already there. Often times, there was something added that significantly changed the course of the song. It would either inspire a new section or bring a different mood, or color, to the song. It's a very collaborative process that demands an open mind and makes you look forward to what the song could be, rather than being attached to what it was. Although the instrumental components of this record are very collaborative, the lyrics are written by Sandra. I think this helps make the sound and vision both cohesive and fresh.

How did coming up in Oakland influence you as artists?

DOUG STUART: One of the things that make the Oakland scene so great, is that it's truly diverse. It's home to so many different types of artists that all play and attend each other's shows, but there's rarely any imitation. So we're constantly being inspired by a lot of different sounds and styles, without the pressure of having "fit in" to any kind of box. It makes for some really unique and inspired work.

What are the ingredients of your sound? Technically, and as far as your influences.

DOUG STUART: A big part of the sound of this record is in due to the process of writing over drum loops that were recorded on a phone, and that often sounded completely blown out and distorted. These raw drum sounds were a starting point for the palette of each song and inspired us to take chances with the synth, guitar, and vocal tones. A lot of the influences for this process and these sounds are rooted in hip hop production. MF Doom and Knxledge are two artists that I can point to as strong influences on the sounds that we were working with for this album.

Tell me about the phrase "Confident. Open. Persistent but Daily," sung over again on "Rogue Dream." Is that a mantra for you?

SANDRA LAWSON-NDU: The song is about trying to pull a loved one out of a dark place. You want to acknowledge their strength while you try to somehow help them through, realizing that it's not always in your power to shift things. This is all laid out in a dream like quest that travels between small victories and disappointments. The mantra represents a tool (or spell) for keeping that determination afloat. There's a part of it that can be grounding but there's also a part that's weighted with that hope and expectation of fixing things

How does spirituality play into the album?

SANDRA LAWSON-NDU: I was baptized Methodist, and grew up drifting between Baptist, Non Denominational and Nigerian Anglican churches all the while attending Catholic school. So albeit a very, very Christian lean, I was already in a mix of some contrasting ideas of what was "true" and what was not. Not to mention there was that whole other side that delighted in the possibility that some parts of Philip Pullman's trilogy "His Dark Materials" HAD to be true!

Today, I connect to different ideas of spirituality. Some of these appear in contrast to each other, but in my eyes they also share beautiful common threads that depict very human desires to connect, find grounding, and feel supported. I sometimes find myself praying or sending some hope outward to something that exists beyond me. I use Tarot as a means to organize my thoughts. I refer to things as magic and think that a few people in my life are truth-seers. Who's to say what's right or how truth manifests?

The record returns to dreams and sleep a lot, there's sort of a tension between quiet and chaos. How were you navigating that?

"As a Nigerian American woman, I wanted to create something in this genre because growing up there were so few reflections of black people in the sci-fi fantasy worlds."

SANDRA LAWSON-NDU: When sleep comes up in the songs it's often a symbol of peace of mind, often to say "it's ok to rest from all of this." Dreams and fantasy play different roles throughout, but overall they are not there as a means to escape a daunting reality, instead there's an idea of moving through all of it at the same time, the mystical and fantastical with the recognizable and tangible.

Similarly, how do you navigate ambience and dissonance sonically? The record uses both so effectively.

DEREK BARBER: There is something really satisfying about consonant melodies/harmonies matched with elements of dissonance — almost as if they create a sound that is far more interesting then if they lacked their counterparts. We strive to create our own sonic worlds with the intention of being inhabited by listeners. I think ambience and dissonance are just two of the tools which help bring about these musical worlds.

A press release called The Mystic a "sci-fi fantasy." How did and which science fiction influenced this record?

SANDRA LAWSON-NDU: I think it's beautiful to use these imaginative genres to observe our own realities. For me, the best [sci-fi] has the potential to create a sense of openness to what is possible, to help us depart from acceptable norms. I wanted to talk about mental health and I felt like this kind of mystical imagery was a way to enter the conversation from a different angle. As a Nigerian American woman, I wanted to create something in this genre because growing up, there were so few reflections of black people in sci-fi and fantasy worlds. That exclusion was in a way saying that black people were neither a part of the magic nor held a place in the future. When you listen to this record, imagine that so many of the folks here are black and brown. This is just one representation of "Our" current state of magic.

As far as books, the most memorable were the stories from Garth Nix, Sharon Shinn, and Phillip Pullman. What came later was Octavia Butler, Ursula Le Guin, Ben Okri and Akwaeke Emezi, not all classified as Sci-fi fantasy but presenting stories of alternate ideas of reality.

"We want people to feel like they unknowingly took psychedelic drugs, but rather than reacting with fear or stress, they gave in to the experience."

What do you want people to experience with and take away from The Mystic?

DOUG STUART: We want people to feel like they unknowingly took psychedelic drugs, but rather than reacting with fear or stress, they gave in to the experience, and it turned out to be beautiful, transformative, and opened their mind and heart to new experiences and sounds to come... or something like that.