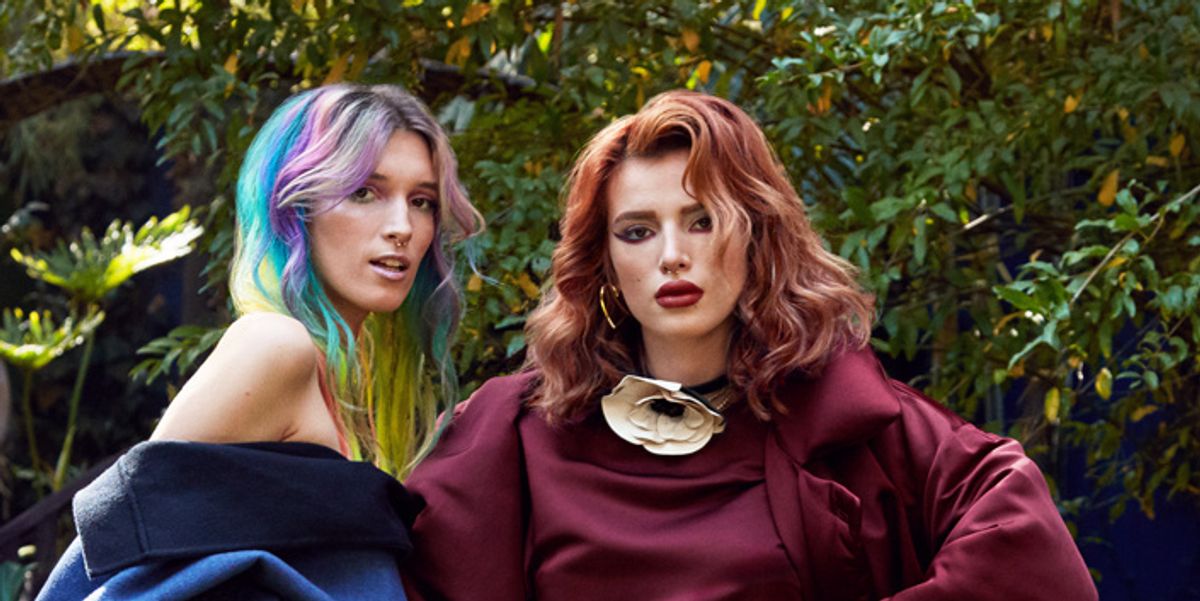 Bella and Dani Thorne Are Not Your Garden-Variety Hollywood Siblings

It's no secret that the Thorne sisters -- actress Bella, 20, and DJ/producer Dani, 24 -- are ride or die. They have matching “twin" tattoos that say, “IF LOST, FIND TWIN," after all. Bella has come a long way from Disney Channel's Shake it Up, now starring in Netflix's horror-comedy The Babysitter and Freeform's drama series Famous in Love. While she's been a Teen Vogue darling/Snapchat celebrity for years, her sister Dani is newer to the Hollywood scene -- and all the rumors and unsolicited photos that come with it. But Dani isn't far behind. The EDM DJ puts together an online music series called "GIRL ON GIRL" featuring female DJs, and next year she will perform at the Lost Lake Festival in Phoenix. PAPER caught up with the sisters to talk about their bond, new (and future) twin tattoos and how they deal with the spotlight.

How was your relationship growing up?

Bella: I know so many people that are not close to their siblings at all. I'm so fucking lucky to have literally the coolest twin sister in the world.

Was the twin label self-proclaimed, or did people just say that to you?

Dani: People ask us all the time.

Bella: It's both. We have matching twin tattoos. Whether we're four years apart or not, we are twins. We are thinking of more twin tattoos, too.

What's the next idea?

Bella: Dani recently drew this little star in the middle of her thumb and pointer finger, right in that little soft spot. I've always drawn tattoos there, too. Dani was saying how she really wanted that tattoo, so I was like, 'Ah, you get the star. I'll get the smiley face, and then we'll have another matching tattoo.'

Famous in Love is getting a second season. What's going on with your character Paige next year?

Bella: We pick up with her months later, and then we see who she has finally chosen. Her relationship with that character starts to develop and, obviously, crashes and burns like pretty much all relationships, especially in a TV series. Basically, my character's arc this season is [she's] finally coming into her own a little bit more. In the first season, she's so naïve and has really no idea what she's talking about or how to handle the business whatsoever. And this season, she does get to have her head on a little bit straighter.

How do you relate to that character?

Bella: I relate to her in a sense that every way she turns is a new door to open, and she doesn't know if she should fall down that rabbit hole or not. That's just something about this business that never goes away. Choosing to be in it and choosing to want to be here is such a big commitment emotionally.

What upcoming projects are you excited about working on?

Bella: I have a film about alligators that I'm really excited to film that will be shot when I get done with my show, probably in February. We're from Miami, so we see them all the time there.

Dani: We were just talking about how we should build a band together. I'm an EDM producer and DJ, so it would definitely have lots of EDM influence. Besides just making a bunch of original music and collaborating with some other awesome DJs, I also do this online series called Girl on Girl, and it features only female DJs going back to back. It's completely live, not edited. It's a way to showcase other females' talent while also shedding light on them. You can think of all these guy DJs on the spot, but you can't think of any female ones besides like two or three. And I get to work with badass chicks. That's awesome.

How do you deal with the spotlight and the paparazzi?

Dani: I guess you kind of deal with it in the nicest way possible, but sometimes they just overstep their boundaries and I've had to say something sometimes. Like, 'Yo, that's not cool. Back up.'

Bella: I get heated when it comes to paparazzi. Most of the time, I'm really chill and even paparazzi tell me, 'God, Bella, you're so nice. Thanks so much.' Because we get it. Everybody has a job to do. It's unfortunate that [their] job is releasing photos of me not looking necessarily great or doing something that tries to get me in trouble or looks a certain way. Unfortunately that is their job, but they still have bills to pay. So I fucking get it. I'm pretty nice for most of the time until, you know what? You give somebody a little too much leeway and they fucking take the whole rope. And then that shit pisses me off.

I have almost gotten run over running across the street to fucking jump on a paparazzi's car. I've done a lot of things to paparazzis. I've literally taken down their camera as they're still flashing it, and been like, 'Let me talk to you about this right here right now, buddy. We're going to have a full-blown conversation. Like, this isn't you running after me. Me yelling at you running down the road with a camera. No no no no. This is school time. This is straight-up I'm going to have to tell you right now why this is affecting me the way it does.' Because if you don't tell them, then they will fucking harass or jump in front of the car or do whatever the fuck crazy shenanigans [to the next person] and they're not going to learn. So you really do have to say something before they get to the next person that isn't going to be so nice to them, that maybe is going to run over their foot with they're fucking car because they won't get out of the way and they can't see where they're driving. Sorry, I got so heated.

On the red carpet, I've heard photographers screaming at the stars too.

Bella: Mmhmm, they scream at you, and they only say mean things. Because when they scream things, they're mean. We've had friends as well get paparazzi-ed and they just say the meanest things to them. I'm talking fucking gross. I'm saying shit that should not be said out loud, in your brain, or anywhere else in the fucking universe. They're mean. I've gotten some mean paparazzi, but for the most part they're OK. They're not so bad.

What's it like to have a sister who's also navigating this business?

Dani: Not only have we been through everything together but now we're taking on something that if you're alone in this industry could really affect you. To have each other's support to be like, 'Fuck that. Fuck them.You're fucking beautiful, awesome. Fuck what they say.' It's awesome that we can do that for each other.

Bella: We really want to work on a clothing line: backpacks, sneakers, fucking accessories. But also the band.

Dani:The most recent one is the band. We've been dreaming of the fashion line for years now.

Bella: I really want Dani to be the Dakota Fanning to my Kristen Stewart in The Runaways, without the sexual relationship.

Special thanks to Johnny Ray Petersen

Buy a copy of Break the Internet HERE