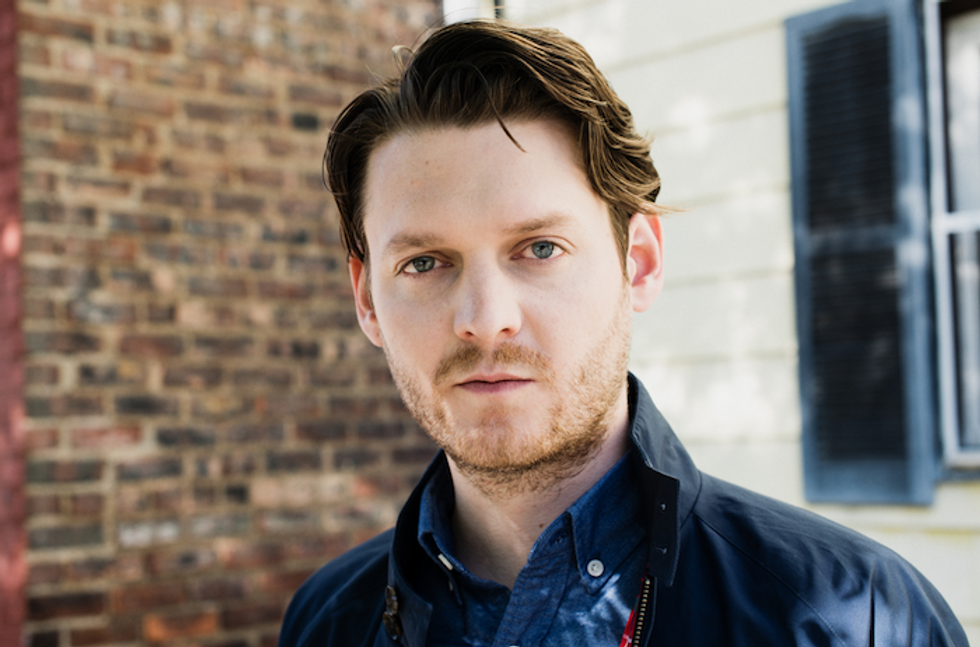 by Jillian Scheinfeld
PAPERMAG
Zach Condon. [Photo by Shawn Brackbill]
For practically as long as Beirut frontman Zach Condon has been on the music scene, his name has been synonymous with travel and an aching need to know more, see more, be more. For Condon, who grew up in Santa Fe, New Mexico, getting out of his hometown was the ultimate prize. But today, sitting in his publicist's office at 4AD taking interviews in anticipation of Beirut's fourth album, No, No, No, out via 4AD tomorrow, he finally feels somewhat at peace with being "just a boy from Santa Fe," as he says. And it's this feeling of peace that also seems to have something to do with the fact that after a four-year breather, Condon and the band are back with a new album and a new energy. He shared with us his thoughts on all the changes, hardships, and growth throughout 10 years since the release of Beirut's first album, Gulag Orkestar, and how excited he is to be back doing what he loves most.

Travel seems like it has always been a huge part of your life -- when was the first time you remember that draw towards another culture and how did your interest evolve from there?

I used to work at this movie theater in Santa Fe, which was a really awesome job for someone like me who lives entirely in my own head. The Adventures of Tintin was the first time I ever realized making a connection like, "Oh shit, Indiana Jones." Before it crystallized into any realized thought, it was probably a tinge of imagination sparked by one of those things. And then it snowballed. Travel became a sense of identity for me. I should say, nowadays I find myself really trying to reel that in, because you can't base your entire personality on something like that. And it's just not healthy or normal.

Right. You can get really caught up striving to add more depth to your persona, and then you think, "well what if I'm just me right now? And what does that mean?" And that's scary.

Yes, exactly. Which is what's been happening recently and it's very much been this funny realization that in the end I just am a kid from Santa Fe, and that's pretty cool, too.

I'd say so. This album, No, No, No definitely has a lighter sound. It still has Beirut's signature melancholy moments, but there is this element of frivolity that suggests you may be taking yourself less seriously and having some fun. Tell me a bit about your mental evolution from recording The Rip Tide to now?

During The Rip Tide I was at the very end of my mental limit, of a very kind of pressed, anxiety about life. It's not like I just rolled out of that. I tried to disappear for a few years, whether on tour or traveling, and then I kind of got called back in. Musically speaking, this record was thanks to my band mates, Nick and Paul, who snapped me out of it. We started having fun with music again and returning to a sort of focus I hadn't felt in a really long time, so that was a really awesome thing to rediscover.

How did they help you out of your rut?

By saying, "Zach, if you want to write a fucking lounge song today we'll be your backing band for that, and it's funny and just enjoy it." And we just did it on such a consistent basis that we got sort of good at it again. Nick and Paul, the drummer and the bassist, know me well enough to see when I've hit a brick wall and I'm trying to outdo myself. This was them telling me to do the opposite of that.

How did you originally meet Nick and Paul?

It's actually a funny story. Well, you have to know Santa Fe to an extent to know why it's so funny and how I sit against all these things that are Santa Fean. Santa Fe calls itself the "The City Different," and what you get is a lot of the hippie generation that got lost there on an acid trip and never came back. People introduce themselves like, "Hi I'm Bob, a Sagittarius, and you?" -- a lot of drum circles, that type of shit. So, Paul was a shaggy student at the College of Santa Fe and Nick was his buddy. Paul kept approaching me after shows and said "I really like what you do, we should get together some day and jam, I play bass and my friends play drums." When someone comes up to you and says that in Santa Fe, warning lights just go off, but obviously at some point I had to play SXSW and I needed a band, so I said "OK lets do it." And the rest is history. I just didn't see that coming in a place like that.

You spent a lot of time in Turkey over the past few years. What brought you out there?

I'd been to Turkey before and really loved it but only stayed briefly. My fiancÃ©e is from Turkey, so we just started spending most of every summer there. I would do a few shows in Europe and go back to Turkey. I dug myself in like a tick for a minute, which was really nice, because I really needed it. I found a nice place where I was very present in day-to-day life.

I read you grew up listening to Doo-wop and Motown music, and you can definitely hear that influence on this album, most obviously in the beginning of "Pacheco." If you could go back in time and see any artist in that genre, who would it be?

Any concert with Smokey Robinson or any band backed by The Funk Brothers. Have you heard of The Wrecking Crew? If you listen to anything from Diana Ross to Smokey Robinson, they were always the anonymous band backing them. My big thing would definitely be Smokey, or I'd like to go even further back and hear Frankie and the Teenagers or something like that, just hear that raw and unamplified. "Pacheco" is kind of the most obvious, but it's definitely there all throughout. But man, now that I'm thinking about it, I'd really have to look through my catalogue, because that's where it gets really intense.

It would be pretty awesome to see The Shirelles or the Ronettes.

The Ronettes would be pretty great. I actually saw Ronnie some years back, before the pool had opened in McCarren Park, and she was playing there. I thought it was the craziest thing.

You live in Williamsburg?

Yeah, I'm thinking about moving, too.

Everyone is. We all want out. Anything that neighborhood used to be is no longer. I moved there about 10 years ago and I've lived around it. But there are so many layers. And then of course it's typical; people who came here 10 years before probably hated it, too.

Likely. What do you envision next for Beirut?

I never truly know, but this album really did knock down some walls for me and gave me an actual functional way of working and finishing stuff, because of the process and how it was done. I leaned on other people and not just myself. Even in the studio, I stayed away from trying to tweak with how it was recorded and let this guy Gabe Wax do it, and he was amazing.

Was that really hard for you?

I constantly felt like I was about to meddle and then I was like, "shut up and read a book or something." We would do everything live, so I had to remind myself to just continue playing the piano part, that I shouldn't be bouncing between the rooms trying to figure out how it can sound better. It was really just hands off, no worries, I already wrote the music -- there was nothing more for me to do. I feel like I've created a system that seems sustainable without destroying myself. There was also a reason the album is kind of short.

Yes. That's part of the reason and also I told myself I needed to stop when I did to avoid getting worn out, so that I could do this again in six months and I'm not just overwhelmed by what I created before.

Looking back in retrospect to 10 years ago recording Gulag Orkestar alone in your house, and now releasing your fourth album, achieving all this fame, and the ensuing consequences of fame -- how do you feel it about it all?

Well that's what the title is about. It's a jokingly, exasperated, "No, no, no." I was making fun of myself for constantly being tired, turning things away, and always being exhausted by my situation. The thing you have to understand about that, though, is that it's a joke. Not a "ha-ha" joke, but just me and my friends winking at each other. I may feel like I've been thrown around in the ring from time to time, whether on the road or even doing live interviews, and being construed a sort of way. You feel taken and pulled around, hence titles like "The Rip Tide." But the underlying theme is that I don't know how to do anything else and I have zero interest in doing anything else with my life.

I think the new approach is a good approach. And you'll be on tour throughout the fall?

I'll be honest, I almost felt I had let myself go with this album and that people would be sort of confused, so I'm happy to hear that. Yeah, we're going to Europe and then playing the West and East Coasts in the States. In the middle of winter, I personally would like to get back to sitting back in the studio and start playing again.