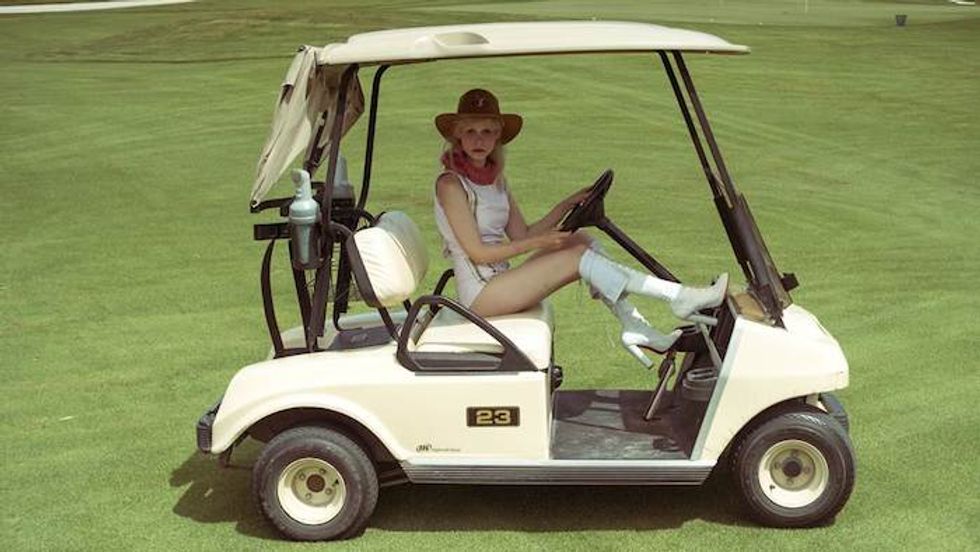 Behind the Scenes of Petite Meller's Breathtaking "Barbaric" Video

by James Rickman / photos by Jonny Kight
PAPERMAG
Hot on the heels of her ecstatic "Baby Love" single and a fashion feature in our Use Your Voice issue, psychology-obsessed French pop artist Petite Meller returned earlier this month with "Barbaric" -- a video that, if nothing else, gives lie to southern Florida's geriatric reputation. Sonically and visually, it's her grandest endeavor so far. When her first album comes out early next year, we expect millions of people to start slathering on rouge and regressing to childlike, even animalistic states worldwide.
Below, a handful of Jonny Kight's breathtaking BTS photos and a Q&A in which Petite tells us about the video's inspirations, her unorthodox casting process and the piss-and-vinegar spirit that fueled the rest-home scenes.
There's some fighting in the video, and at first it appears to be the song that's inciting it. What inspired those shots?
My videos always deal with unconscious desires, psychoanalysis and cinema. I was reading Deleuze when writing this song; his philosophy about the becoming fascinated me, especially when he talks about the wolf-man, and his wish to become a part of the animalistic gang in his dream. The movie Cocoon was part of the inspiration for the "Barbaric" video. The song is about the wish to be uncivilized, to un-suppress your wild desires in order to fit the reality's norms.
Where did you find the three kids who dance in the road?
I actually found them at Denny's Diner. I was looking for some kids for a Village of the Damned scene we had and this Irish family was sitting there at the diner fighting. Two boys and a girl, they looked innocent but with a strict education, so we approach them and they said they'd think about it. I thought it was a definitive no but then after their mom checked "Baby Love" in YouTube she ran back outside to tell us they would love to. A minute after we got SMS with a photo of the two boys wearing my blush on their cheeks and nose! I always come to the town where we shoot a week before, wander around and find my cast. I believe in coincidental authentic encounters. I believe they're in my video for a reason. That it meant to be. They're my friends forever.
Tell me about one of the people you met in the rest home.
On the morning of shooting we came to the location and an old lady ran to me with a Paris shirt and said, "I saw all your videos. I know 'NYC Time,' 'Backpack' and 'Baby Love.' I'm ready for dancing!" I really felt the excitement in their eyes and it made me happy inside. I wanted to show how even if people are put in comfort homes, they've still got the spark to get wild. Another lady shouted at the director because he had posed her sitting down, while her friends were dancing behind her. She said, "You are lying to me. You told me I'm in the frame but I'm not! I see all my friends are dancing and I'm just sitting. You're a liar!"
Last time we talked, you said, "I always want to make the next video just to take me home." Does "Barbaric" take you home? If so, where, exactly?
The "Barbaric" video is another voyage down the pastel art deco facades into an unconscious memoire of growing up with my grandparents who used to take me to the beach, read me poetry and talk philosophy around me. I feel in some way this video is a closure for me, a better ending for them in a beautiful happy and wild retirement house. We sometimes forget these characters exist, but they're there with spark and magic with amazing charm and wisdom.
You've shot videos in New York, the French Riviera, Nairobi and now Florida. If you could shoot your next video anywhere in the world or beyond, where would you do it?
Because the sounds send me to where I'd like to shoot, and because my album is ready, I know exactly where I'll be shooting my next videos; I just can tell you. It's really far -- my dreams are expensive.
Famous People