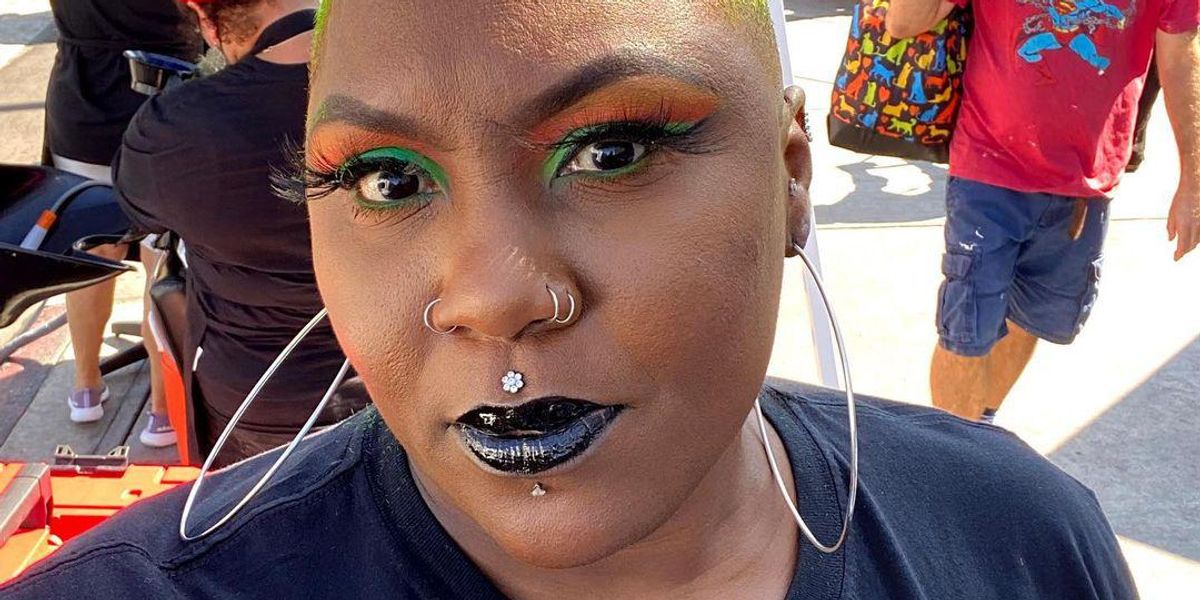 Since the start of the pandemic, Beauty2TheStreetz has been praised for its COVID-19 outreach efforts in LA's Skid Row. But contrary to all the headlines, if there's one thing founder Shirley Raines wants to make crystal clear, it's that she's "no hero" for handing out food and face masks to the city's homeless population — just a person doing what should be done.

"The minute you see me levitating down Skid Row, then give me my flowers," Raines laughed before growing serious, "But a sandwich and a hair wash? No."

After all, while the nonprofit may be currently focusing on the pandemic, the Compton native regularly reminds people that Beauty2TheStreetz started as a self-funded, one-woman operation providing beauty services and products to the homeless. Calling it a form of "spiritual CPR," the self-proclaimed "hood stylist" explained that things as simple as dyeing hair or doling out eyelashes can help "reinstill [her clients'] self-esteem" and give them a piece of their dignity back, which she's found to be just as important as food and clothing.

Because despite all the criticism she's received from people who say her efforts aren't "going to resolve homelessness," Raines clarified that her actual goal has always been to "let [the homeless] know that someone cares about you" — meaning that if more people listened to what they actually wanted, we'd probably be seeing more than just the "socks and food" narrative.

We fed 500 people yesterday , over 30 got a hair cut, 6 women got hair color and 6 people got braids. I have an amazing team.

"They feel dehumanized, they need that back. They're just scared," Raines said, adding that much of this comes from the harmful stereotypes associated with homelessness, who're widely considered "lazy, drug addicts and alcoholics... who are happy living on the streets and don't want no job." However, this surface level interpretation ignores the fact that substances tend to be coping mechanisms for things like rape, abuse and mental health issues which, combined with trauma, the fear of losing it all again and self-esteem issues that come with the stigma of homelessness, make it difficult for them to get off the streets.

"When you peel back the layers, you see what the issues are. And the issues can somewhat be resolved once they feel good about themselves again, just be believing in themselves again," Raines said. "That can come from a fresh haircut, or a new makeup look or getting your nails done. That's the key to [fixing] heartbreak. Whenever you get your heart broken your best friend says, 'Let's go shopping girl'. Someone knows that you need to pamper yourself to distract yourself, which is what we're doing."

"When you peel back the layers, you see what the issues are. And the issues can somewhat be resolved once they feel good about themselves again."

Part of this comes from Raines' own struggles with mental health, which began after her son and grandmother passed away, leaving her with an overwhelming feeling of loneliness coupled with survivor's guilt. But as a Black woman who grew up in a "household that relied on prayer, culturally, more than therapy," she felt like she "was being punished" until finding spirituality and realizing she could channel her hurt into something that benefited others. And the end result? A decision to take all of her "maternal love" she had for her son and redirect it toward a community she saw as needing all the compassion it could get.

"I am not a hero," Raines continued. "I'm a shrunken woman still doing the best she can in the here and now. My son's not here and I couldn't help my son, but I spent my whole life wanting him and wanting to help him. I'm like, 'Why can't I help somebody else's son, or somebody else's daughter?'"

On a deeper level, Raines also admitted that she found herself identifying with a lot of the pain, "brokenness" and "toxicity" she saw on the streets, explaining that when "you have no control over anything, it's the smallest things that you can control that make you feel human." But while she was able to do this by using "makeup as a mask, a disguise and a way to see myself as someone other than a woman who buried her child," she also realized that the people of Skid Row had "all their crap laid out for everybody to see."

So when she recognized this "familiar" type of hurt among the people she was trying to serve, she began to understand how important it was to give them back a similar type of control, especially when "they can't control when they sleep [or] how they get food."

"But at least they can say 'I want my hair like this,'" she said. "It's the smallest things that you can control that make you feel human."

So five years later, Raines is still out in Skid Row at least three days a week with her team, passing out supplies, hosting COVID testing and vaccination pop-ups. And while she may not be able to do anyone's hair at the moment, she's still sticking a beauty product or two in the hundreds of McDonalds meals she passes out every week.

Sometimes I have to match their energy to get them to listen. Mental crisis is hard 🙏🏾❤️ ##helpinghomeless ##DontQuitYourDaydream

"My pain was not in vain. It's knowing that, 'Hell, you've got a crazy ass life but your crazy ass life will help other people,'" she said. "When I wake up and I'm having all this pain and trauma, at least I'm doing something with it."

But again, Raines isn't one to rest on her laurels as she went on to acknowledge that "there's still so much work to do," from larger scale city initiatives to her own plans to buy a mobile shower with a grooming unit and self-sustaining water tank — anything to take care of the people she now thinks of as family.

"It's the smallest things that you can control that make you feel human."

"I don't really know if it's rewarding yet because I really don't see much happening from it which I would like to see. It is rewarding to see people happy," she added. "I feel like [the people I help and I are] married, and we have a complicated marriage."

Raines smiled, "But I would never think about leaving. I wouldn't even pack a bag to leave."