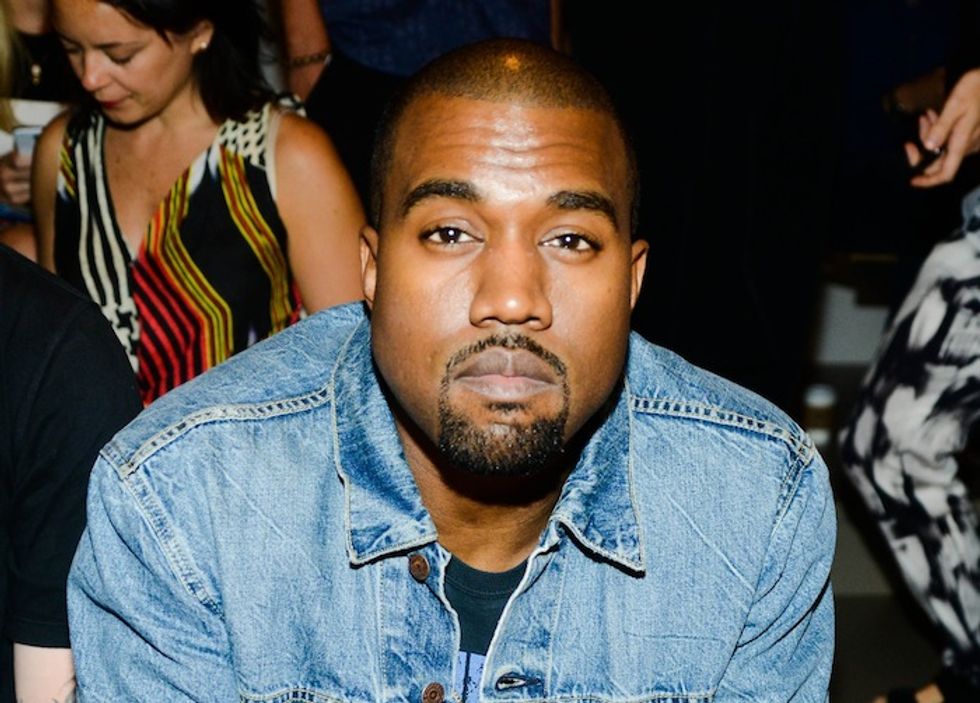 "Beauty has been stolen from the people!": Kanye's Utopic Vision For the Future

by Gabby Bess
PAPERMAG
[Photo by Carly Otness/BFAnyc.com]
When Kanye West took the stage at Oxford University on Monday his speech was less directed toward music and more focused on his vision for the futch (translation: the future). Starting off his lecture for 350 Oxford students, before Yeezus talked for 20-minutes straight, he warned the audience: "OK, everyone please be completely quiet, because I can literally hear a whisper, and it'll throw off my stream of consciousness, and when I get my stream of consciousness going that's when I give the best, illest quotes. Literally, a whisper can throw it off."

With the tone set, the illest quotes were delivered, as promised. Spanning from his thoughts on The Matrix as "the bible of the post-information age" to how "clothing should be like food" to denouncing $5,000 sweaters and praising $5,000 cars for all, Kanye's speech was more like a manifesto. Whether you're pro-Kanye or anti-Kanye, you have to admit that he's got vision. And it's worth noting that his premonitions often come true -- after all, Kanye's debut album was tirade against the higher education system, student loans and minimum wage, and that was back in 2004. Here's what Kanye onto now:

"My goal, if I was going to do art, fine art, would have been to become Picasso or greater. That always sounds so funny to people, comparing yourself to someone in the past that has done so much, and in your life you're not even allowed to think that you can do as much. That's a mentality that suppresses humanity."

"...Not only do I want to design video games, or make music, or ride bikes, I think one of the most important things to my ability to create so much in the past 30 years is my desire to play sports. I approach creativity like a sport, where if I have a drawing I react just like a jock: LOOK AT THE FUCKING DRAWING RIGHT THERE YEAH!"

On time as a flat circle the only luxury:

"You guys have been taught, without you knowing, ways to separate yourselves from each other. If you're separated, you can be easily controlled. If you're too busy pointing fingers at each other, rather than holding hands, you can't get anything done."

"It's illegal to not wear clothes, and also possibly too cold. That means someone is imposing an idea on you that should legally have to do! Clothing should be like food. There should never be a $5000 sweater. You know what should cost $5000? A car should be $5000. And you know who should work on the car? The people that work on the $500,000 cars. All the best talent in the world needs to work for the people. And I am so fucking serious about this concept that I will stand in front of anyone and fight for it. Because I was 14 and middle class. I know what it felt like to not get what I have."

On creativity in the face of haters and The Matrix:

"People say I have a bad reputation. I think I've got the best reputation in the building. They want you to have a reputation of tucking your black nail polish into your pockets and sitting in the corner of the class, and not fighting for your ideas out of fear of being ridiculed. That's one of my favourite ones...to be called crazy."

"What I said [to Steve McQueen] was The Matrix is like the Bible of the post-information age. I compared it like, when the hundred guys come at Neo, those are opinions, that's perception, that's tradition. Attacking people from every which angle possible. If you have a focus wide and master senseis like Laurence Fishburne and you have a squad behind you, you literally can put the world in slow motion."

But perhaps the most salient quote was something that Kanye said as a sort-of-joke:

"Let's have an NBC telethon moment, and say that beauty has been stolen from the people and is being sold back to them under the concept of luxury!"

Admittedly, the transcript for Kanye West's speech is as nonsensical as it makes sense, but isn't that what we love about Yeezus?