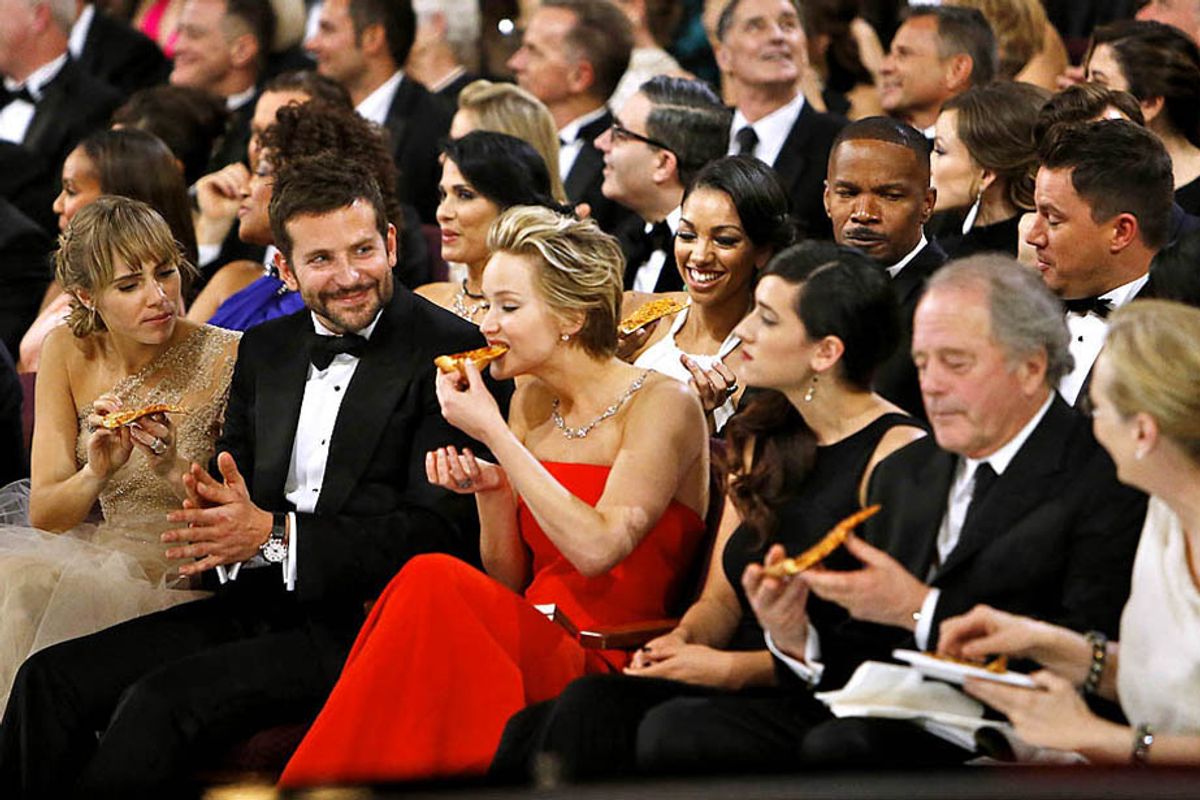 A look at the impossible standard of being pretty, thin and obsessed with junk food.

Two days ago, beloved Bollywood actress-turned-American TV star Priyanka Chopra cemented her place in Hollywood by doing what all beautiful, glamorous leading ladies seem to be required to do: she declared how much she loooooooves burgers.

Decked out in a spangled gown, with flawless hair and makeup, the starlet posted a photo of herself chowing down during her "Red carpet prep" accompanied by the hashtag "#BurgersAreTheBest", proving that not only is she beautiful but, seemingly, effortlessly so.

The history of female stars being impossibly beautiful without any apparent work is long and complicated. The disconnect between the seeming ease with which stars become beautiful and the actual labor behind it is often extreme -- you'd never guess from Rita Hayworth's stunning looks in her breezy dance numbers with Fred Astaire that she was forced to diet extensively and undergo painful electrolysis to change her hairline. More than any other aspect of beauty and personal maintenance, however, a woman's body and relationship with food is used to establish that the star is simultaneously Just Like Us and naturally more attractive than we could ever be.

As far back as the 1960s, Sophia Loren famously said of her iconic figure, "Everything you see I owe to spaghetti." Among contemporary stars, Jennifer Lawrence is undoubtedly the most famous (and extreme) example of the very pretty, fit woman who talks endlessly about the seemingly-impossible amounts of food she eats. While Lawrence should be lauded for her vocal critique of Hollywood's absurd standards of thinness, her insistence that she eats outrageous amounts of junk food (going so far as to famously order McDonalds on the red carpet) paired with her Hollywood-approved body sets an impossible standard for the women who consume pop culture. Not only do you have to look as good as Jennifer Lawrence, but you also have to pull it off while being fun and carefree and unconcerned about your weight.

These contradictory expectations -- look good, but don't worry about looking good -- and the way they affect women's relationships with food are somewhat related to the "Cool Girl" phenomenon, but they go beyond that. It's not simply a matter of being able to fit in as one of the guys; after all, Sophia Loren was hardly a tomboy. The idea that being beautiful -- a thing so closely associated with thinness in magazines and movies and television -- is the most important thing a woman can be is ingrained in girls from the moment they first become aware of their female-ness. If we truly acknowledged, and forced men to acknowledge, the pain and discomfort and effort and cost that go into being thin and pretty, how could we possibly continue to demand it of women?

A refreshing antidote to the Lawrence school of effortless beauty comes from an unexpected source: pop culture's favorite (deserved or not) punching bag, Anne Hathaway. In 2012, Hathaway made headlines by losing a shocking 25 pounds for her role in Les Miserables. While most coverage focused on the starvation diet the actress went on for the role of Fantine, Hathaway had already addressed the cost of thinness in her career in an even more radical way during press for The Devil Wears Prada, acknowledging that she cried from hunger while working on a film where she was not playing a starving prostitute, but a normal woman. While Hathaway's candor may be unique in Hollywood, she's not the only global celebrity to describe the effort that goes into maintaining a movie star physique. In fact, it's standard for Bollywood stars to discuss the work they put into making their bodies camera-ready.

Surely, Chopra and Lawrence really do love burgers. (Who doesn't?) But, as stars increasingly let us into their lives with social media, hopefully our icons of glamor will begin to acknowledge that, for them and for us, beauty takes work.