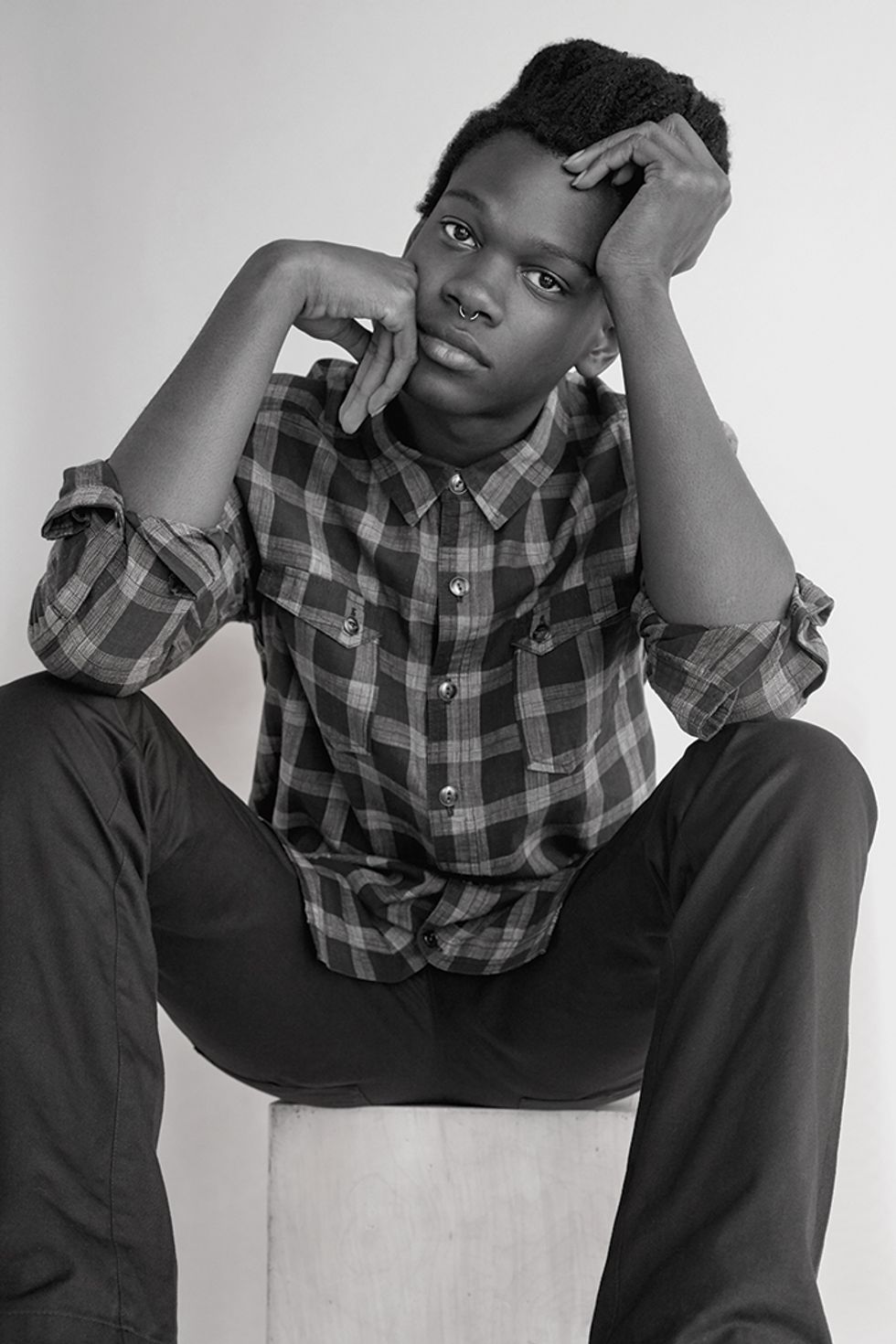 by Liz Ohanesian / Photography by Albert Sanchez
PAPERMAG
Styling by Dana Goldenberg at Wilhelmina; location: Apex Studios
PAPER is proud to present a conversation with Shamir, breakout pop musician and member of the Beautiful People Class of 2015. Read on for his take on the American Dream (the theme of our April issue), and meet Shamir's classmates here.

Let's talk a little bit about your background. How did you get started?
I decided that I wanted to be a singer at eight and begged my mom for a guitar. At around nine, she finally got one for me. Just like my song "On the Regular" says, my first guitar actually was an Epiphone. That was like my baby. I'm also completely self-taught. When my mom bought me a guitar, she also gave me a book and was like, "I'm not paying for lessons." So I taught myself, not realizing that I was playing upside down the whole time until somebody told me. I taught myself how to play guitar upside-down and I don't know how to play it any other way.
Do you play guitar left-handed?
Yeah, pretty much. I play a right-handed guitar left-handed. But the weird thing is that I'm right-handed when it comes to writing. I don't even understand. I guess I'm half-ambidextrous. I think in my last life I was a left-handed musician, and that's still with me.

What kind of music were you into most as a kid?
My first guitar was acoustic, and I gravitated towards country and folk music to begin with. And that's also because I was super obsessed with Taylor Swift and Laura Marling at the time. I wanted to make music that was a hybrid between those two. When I was 16, I started a punk band called Anorexia; we were together up until I was 18. We took a small hiatus because we had just graduated from high school and were working and trying to get our lives together. We decided to so some side projects in our rooms because we weren't able to practice as much as we wanted. That was around the summer of 2013, and that's when I decided to do more electronic and pop music. And that's how Shamir came about.

What influenced you when you were getting into electronic stuff?
A lot of people think that I was into a lot of old-school house, like Frankie Knuckles and old disco music. Honestly, I probably never listened to disco music before this outside of the radio, if that even counts. I never really knew what house music was. Electronic music to me was just EDM, especially coming from Las Vegas where that's such a huge thing. In Vegas, EDM is Skrillex and Diplo. But I just wanted to do my own style of electronic music. It was definitely heavily influenced by pop stars, their different personalities, like Lana del Rey and Marina and the Diamonds and stuff like that, but also, oddly enough, I was trying to do a very synth-type sound like Zola Jesus or Austra. It ended up sounding like old-school house music and I never even realized it until a producer I worked with -- Nick Sylvester -- pointed it out when I played him my demos. I was like, "I don't even know what house music is!" No one around me listened to it or played it. I just never really listened to a lot of electronic music, especially coming from such a strong country, R&B and pop background. He played me some stuff and I realized that what I was going for was along those lines. It's just kind of a crazy feeling because I thought that I was doing something super new and fresh. Then again, because it's so uninfluenced, it still sounds fresh in a way -- like a spin on something that's already been done.

I did think more of Austra when I first heard your music.
Vocally, that's where I hear that influence. That was my early opening to pop music too, because of that and Victoria Justice. I really wanted to do pop music after watching a lot of [Nickelodeon series] VICTORiOUS. That's one of my favorite shows ever.

Because Vegas has these big night clubs, I wonder if any of that impacted you.
It's definitely more for the tourists, but a lot of locals go. Especially pool parties in the summer. But pretty much all of them are 21 and over, and I'm not even 21 now. Growing up, that definitely wasn't my scene -- and even if I wanted it to be my scene, it couldn't be. I'm not a partier, anyway. I think that's where a lot of the introverted elements of my music come in. There are not too many musical scenes in Vegas. Probably the most prominent one is hardcore metal music. A lot of my music comes from isolation and introvertedness and locking myself in my room with a guitar and a drum machine and a 4-track.

Seeing as how this is the "American Dream Issue," what does the American dream mean to you?
A lot of people think of the American dream as being comfortably rich, owning a nice house and maybe achieving fame or something. That's something that I never really bought into. To me, the American Dream is quietness -- being able to live in such a big country and having the choice to live in a really overly populated big city like New York or L.A. and, if you get tired of that, you can go live somewhere in the middle of Nevada or Montana or live in a little town with only a thousand people. That's what cool about America: we have those choices.

Where do you prefer to live?
I'm definitely a desert boy. A lot of people think that Vegas is a big city like L.A. or New York. Not too many people live in Vegas. It's mostly tourists that come through. You kind of have the choice of living this small town life or the city life. There's a weird dynamic of both. I'm from North Las Vegas, which is very small town-like. There are a lot of Mormons, a lot of churches. I grew up across the street from a pig farm. It's super desolate and very desert-like, but you can drive a half-hour south and you'll have all these big buildings and the Strip. That's what I love about Vegas: it's the best of both worlds.