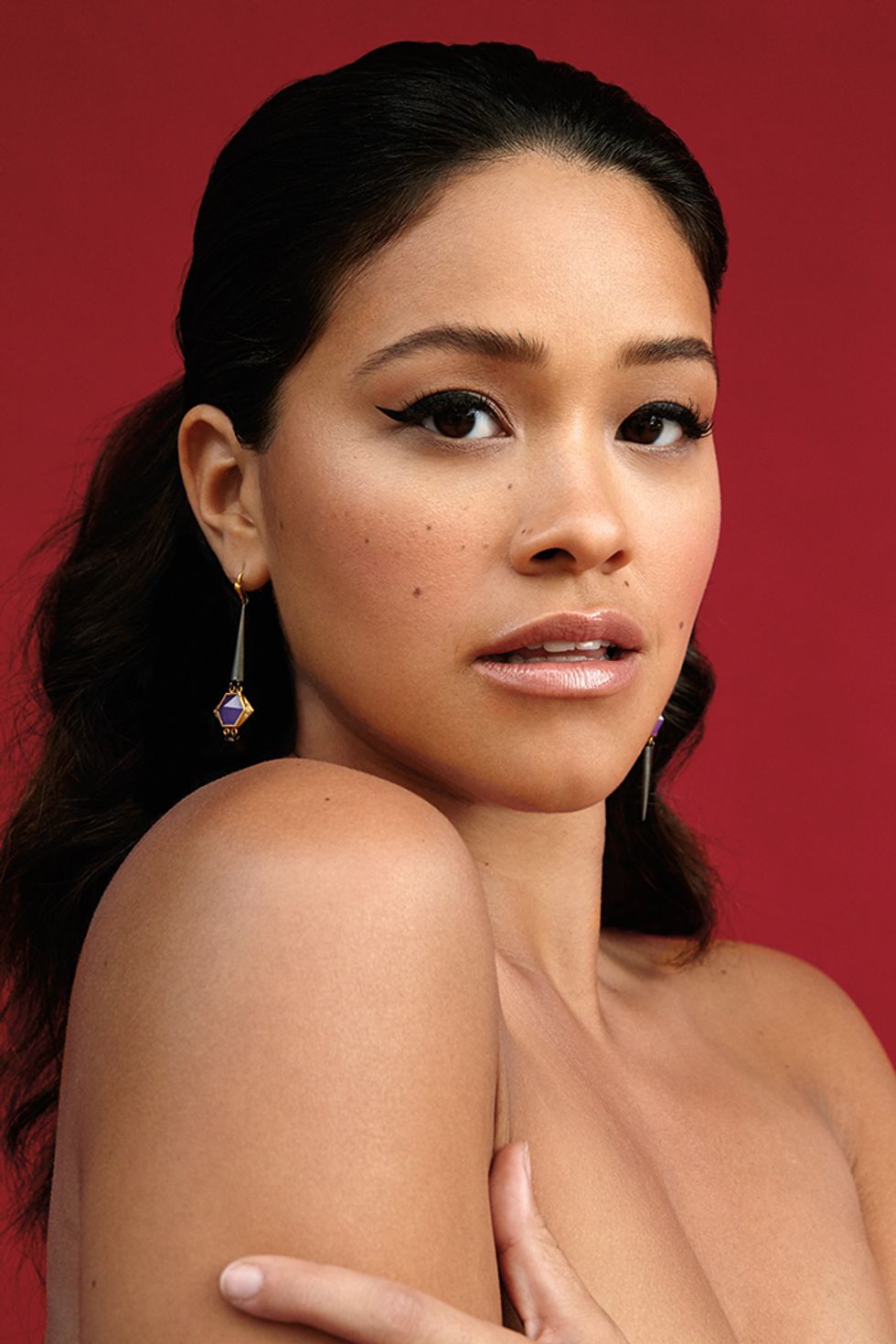 by Emily Warman / photo by Albert Sanchez
PAPERMAG
PAPER is proud to present a conversation with Gina Rodriguez, Jane the Virgin star and member of the Beautiful People Class of 2015. Read on for her take on the American Dream (the theme of our April issue), and meet Gina's classmates here.

What's life been like since your Golden Globes win? Must be kind of a weird time right now.

It's funny: nobody has ever put it that way, but that's exactly what it is. I describe Golden Globe week as like your birthday. You're nominated, you're celebrating, it's your birthday and everybody is excited. And then the next day you go right back to work. Birthday is over! You feel like something comes along with it, but for me going back to work was the best thing because it's what got me there. You continue on with life. You've got to keep going forward and keep your head down because that's what matters, but it is a strange feeling to describe. Remarkable, outrageous, ridiculous, insane, amazing... but those don't even come close, they don't skim the surface for your gratitude with life. Then everybody sees you differently, and you don't. People overnight thought I became rich, like the Golden Globes came with a million-dollar check or something. It was interesting. But it's the best thing that's ever happened to me in my career to date, hands down.
What were the best reactions to your acceptance speech? What touched you the most?

Right after I won, I get swept up in the back to do press for like an hour. I didn't have my phone on me, so it was me by myself. And that's a beautiful feeling. I went to my phone and right away people were like, "You have to see Twitter! You have to see Instagram!" Just seeing how much people desire to be motivated, to be empowered, to be inspired... we want that in our lives so bad. Moreso than to hate on people and to say negative things, we want love and acceptance and to support each other. And to feel that from so many little girls especially, taking my picture and putting my quote up and saying, "I don't know who she is but I feel like I won too!" And they did win! And I felt like my heart was heard. That's what you hope, that people will understand you and they'll know.

The greatest gratification was seeing how many women were inspired by it. So many people were writing "I can and I will" on everything, putting it on their bathroom mirrors and sending me pictures... putting it on Post-its, and drawing it and painting it, their form of expressing themselves with my father's words that he gave me so long ago; that was remarkable.

In a million years, I did not expect that. Not to mention I didn't even write a speech. Girl, I swear someone else spoke for me! I was in the bleachers! I was in the nosebleed section. So many of the other nominees were so much closer. I was just enjoying the night; the nomination was the win. When they called my name all I heard white noise. I didn't even know what was going on. I started traveling and it felt like seven years until I got up on the stage, and then Oh my god there's Oprah! There's Meryl Streep, and there's a big clock counting down the 43 seconds I have left to talk. It is such a crazy feeling, so wild and cerebral. So that fact that words even came out... I was thankful I could even speak, and thank you God for speaking for me. It was incredible to see how many people attached themselves to that quote. The best moment was getting a text from my sister; she was with my parents at the house. My middle sister took pictures of my parents hugging and crying in each other's arms. I could cry right now.
Obviously diversity in Hollywood is a problem. Are things changing?

It has significantly changed for the better. The fact that I was even able to get a role like Jane -- the movement had already started before I got that role. This pilot season, over 30 Latinos were cast in prime time shows. That is probably a record high. To see shows like Telenovela from Eva Longoria and The Curse of the Fuentes Sisters... Just to see so many great shows that have a strong Latino cast is really inspiring. I hope Jane the Virgin has contributed to that letting go of fear that it's a risk, because it's not a risk. You hire a good actor, they're going to deliver, regardless of their color. Regardless of their culture.

To me, you write for human beings. You cast the best actor, you will succeed. Hands down. We're bored of seeing the same stories that aren't integrated with the diverse life we live. Literally, a night out with me and my friends is like a United Colors of Benetton ad. Friends was an amazing show, but it's like, "There are no brown people in New York City? You're out of your mind!" We don't buy it anymore. Back then was different, that was the culture we were living in in the '90s. It's 2015: no one is buying it.

Now the way the world changes, we also have to change our formulas. And we have to include people that are very vocal, that are the hardworking fabric of America. Not just Latinos, but the Asian community here in the states. I believe the Asian community has a very similar experience to the Latino community, because we say "Asian" and "Latino" but under those umbrellas there's Korean and Japanese and Chinese... there are so many under those umbrellas and they're trying to find their voice as well. I love Fresh Off the Boat -- such a good show, so funny. I see the change and it's inspiring, and on its way to do more and more. It's going to open doors for women and equal pay and beauty norms changing. We're going to start realizing that being inclusive is what we're driving towards. Being equals is what we all desire.
What is your American dream?

I reached my American dream when my father said I can be an actress. I was 24 years old doing a play in St. Petersburg Florida. It was a random experience and  my father came and watched the play and he was like, "Man, you're good. You can do this." My parents' acceptance, and me recognizing my talent in their eyes? The American Dream for me is to live happily. To do what I love and to live happily. Success to me is happiness, health and love. Everything else has been blessing upon blessing upon blessing.

BACK TO OUR 2015 BEAUTIFUL PEOPLE
You May Also Like
Fashion