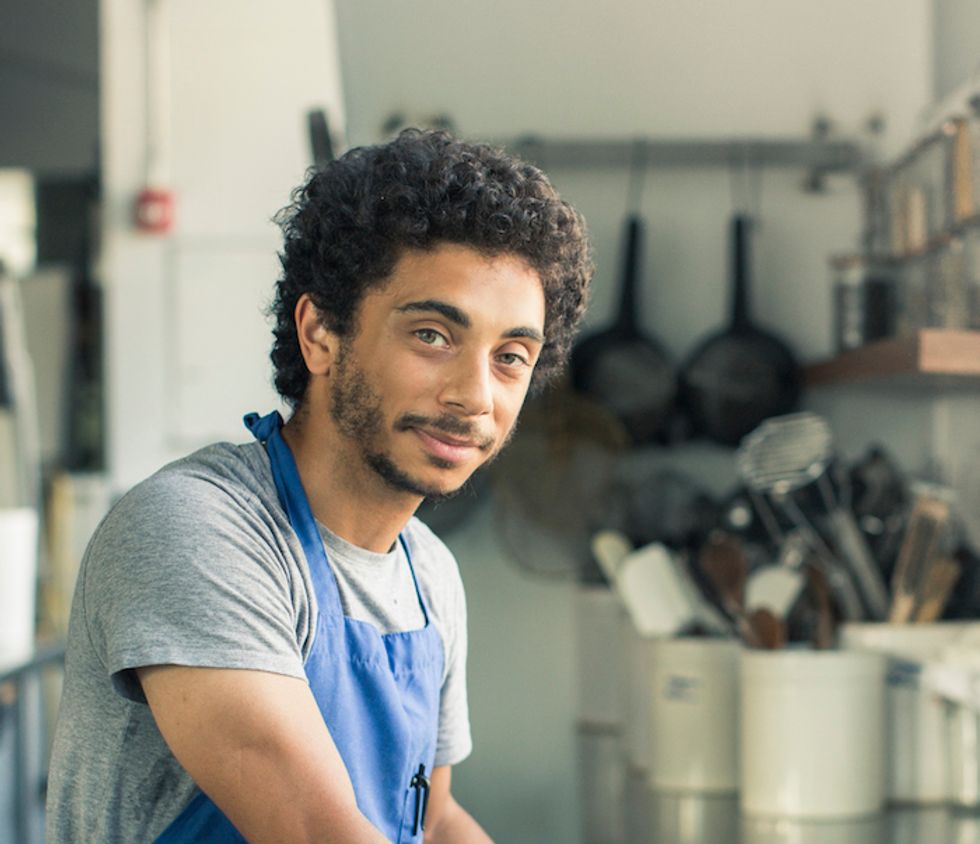 by PAPER
PAPERMAG
Meet 10 of the most exciting chefs, restaurateurs and dessert bosses working today -- and check out the wildly diverse ways they redefine the theme of our April issue: the American Dream.
Photo by Alan Gastelum
Gerardo Gonzalez / El Rey Luneonette
Chef Gerardo Gonzalez coaxes big, bold flavors out of his miniscule 5' x 3' kitchen at El Rey Luncheonette on the Lower East Side. Taking inspiration from the Middle East, coastal Mexico and hist native SoCal, Gerardo keeps his dishes fresh by creating specials out of produce brought to him by neighbors with local gardens. With limited space and an open kitchen, Gerardo talks to his regular customers and uses their feedback to shape his bright, colorful, veg-centric menu. His warmth and fearless culinary innovation make his one of New York's most exciting young chefs. [Leif Hedendal]
Photo by Christelle Castro
Sabrina De Sousa & Alissa Wagner / DIMES
Sabrina De Sousa and Alissa Wagner, co-owners of beloved Chinatown health oasis Dimes, rule the downtown wellness scene with seasonal-local-organic food, juices, teas and homemade apothecary products. As a realization of their combined interests in healthy California cuisine, DIY herbalism, design and art, the Jersey natives and longtime friends opened Dimes a couple years ago to immediate success. Now they've moved across the street to a larger space with a more developed menu; the original will reopen as the takeout / produce / hippie body product outlet Dimes Superette. Artists and models: flock accordingly.
[LH]
Photo by Issy Croker of The Curious Pear / @Curiouspear
Elise Kornack / Take Root
Elise Kornak's Take Root is one hot NYC dining concept whose food far outshines its artsy premise -- and that's saying a lot. Begun as a dinner party habit by 28-year-old aspiring artist-turned-chef Elise Kornack, the tiny spot only opens three nights a week, offering an ephemeral set-dinner menu for 12 seats a time. Footprint aside, Kornack's restaurant, with its surprisingly harmonious juxtapositions of ingredients and intricate plating, has already earned a Michelin star. [Cathy Erway]
Photo by Jeni & Dylan
Jessica Koslow / SQIRL
A jam empire turned full-throttle food revolution... SQIRL's Jessica Koslow is officially the talk of L.A.. Her self-described California comfort food draws lines around the block for her famous burnt brioche ricotta toast dolloped with seasonal jam, her Kokuho Rose brown rice bowl and other next level dishes. A critical darling, she's been praised for walking the line between reimagined classics and market-driven innovations. Up next: SQIRL Away, for the gourmand on the go. [Vanessa Lavorato]
Sara Kramer
Pour one out for Brooklyn. Los Angeles pulled a coup on us last spring when it was announced that chef Sara Kramer, formerly at famed veggie-centric Greenpoint restaurant Glasserie, would be taking her talents to the West Coast. The winner of Eater's 2013 Award for Best Chef is opening two spots later this year with her former Glasserie sous chef Sarah Hymanson: a falafel shop and a more formal Mediterranean outfit. A tale of two Sara(h)s, indeed. [Emily Warman]
I think a strong component of the American Dream is the opportunity to have (and employ) the freedom to determine one's own destiny. It's an opportunity I try very much to not take for granted.
-- Sara Kramer
Janeen Gudelj / The Donut Snob
Los Angeles is the donut capital of the nation, and Janeen Gudeji's Donut Snob is its shiniest monument. From the get-go, the gourmet donut delivery operation has tempted the collective sweet tooth of countless Angelenos with fluffy raised sugar bombs coated in peanut butter glaze or salted caramel and topped with maple bacon. Despite the gluten-free craze, her award-winning sweets -- her babies have been named the best donuts in L.A. and Donut Snob one of the top 10 donut shops in the nation -- are the new classic. [VL]
Alvin Cailan / Eggslut, Ramen Champ
It might feel like food porn has hit its climax at Eggslut, but chef Alvin Cailan is just warming up. Since opening his breakfast hotspot in downtown L.A.'s food mecca, Grand Central Market, Cailan's slinky egg sandwiches have created a buzz as far as Tokyo. Riding the wave of hashtag fame, the culinary ace followed up with Ramen Champ in Chinatown's trendy Far East Plaza (Both Andy Ricker's Pok Pok Phat Thai and Roy Choi's Chego are there). Drool-worthy photos of his bacon, egg and cheese sandwiches and steaming bowls of ramen have set Instagram on fire, as food nerds geek out over the latest dish to make a debut. [VL]
Photo by Eric Wolfinger

Miles Thompson / SHED
At 13, he was in the kitchen of a New York catering company; as soon as he hit the L.A. scene, Miles Thompson was on the line in top eateries Nobu, Animal and Son of a Gun. When his slick pop-up, the Vagrancy Project, turned full restaurant as Allumette closed, he took his knives to James Beard award-winning SHED. As head chef of the Bay Area grange, Thompson has dialed into agrarian sustainability to preserve the seasons through a Nobu-inspired menu focused on fermentation and produce cross-utilization. It's safe to say that the vegetable maverick has hit his stride. [VL]
I define the American Dream as the ideal that all people in this country, citizen or not, can better their lives and ultimately the lives of their children and future generations through the commitment to and devoted practice of a strong work ethic. This to me is a reflection and definition of the self, and limited not only to the work that one is compensated for, but the work it takes to search for and hold fast to love, dreams and family.
-- Miles Thompson
Photo by Jackie Yen

Alexandra Whisnant / GÃ¢tÃ© Comme des Filles
Combine the richness of chocolate with the vibrant flavors of seasonal ingredients and you get the brainchild of chocolatier Alexandra Whisnant. With the Cordon Bleu in Paris and Chez Panisse in Berkeley under her apron, Whisnant creates masterful bonbons that mark a renaissance in the craft chocolate arena. After pop-ups in Paris and a return back to California, where her confections have been featured in San Francisco's Bi-Rite Market and the likes, her next step is a brick and mortar chocolaterie devoted to the world's favorite bean.
[VL]
Photo by Ethan Scott
Angela Dimayuga / Mission Chinese NYC
When Danny Bowien decided to expand his makeshift Chinese restaurant from the Mission to the mean streets of NYC, he needed a local chef at the helm. Coming off years at Vinegar Hill House and having no previous experience in Sichuan cuisine, Angela Dimayuga was it. After a roller-coaster two years of fame and rats, she's now executive chef at the restaurant's newly reopened Chinatown location, where she adds a taste of her Filipino background to its expanded menu -- along with plenty of numbing-hot spice. [CE]