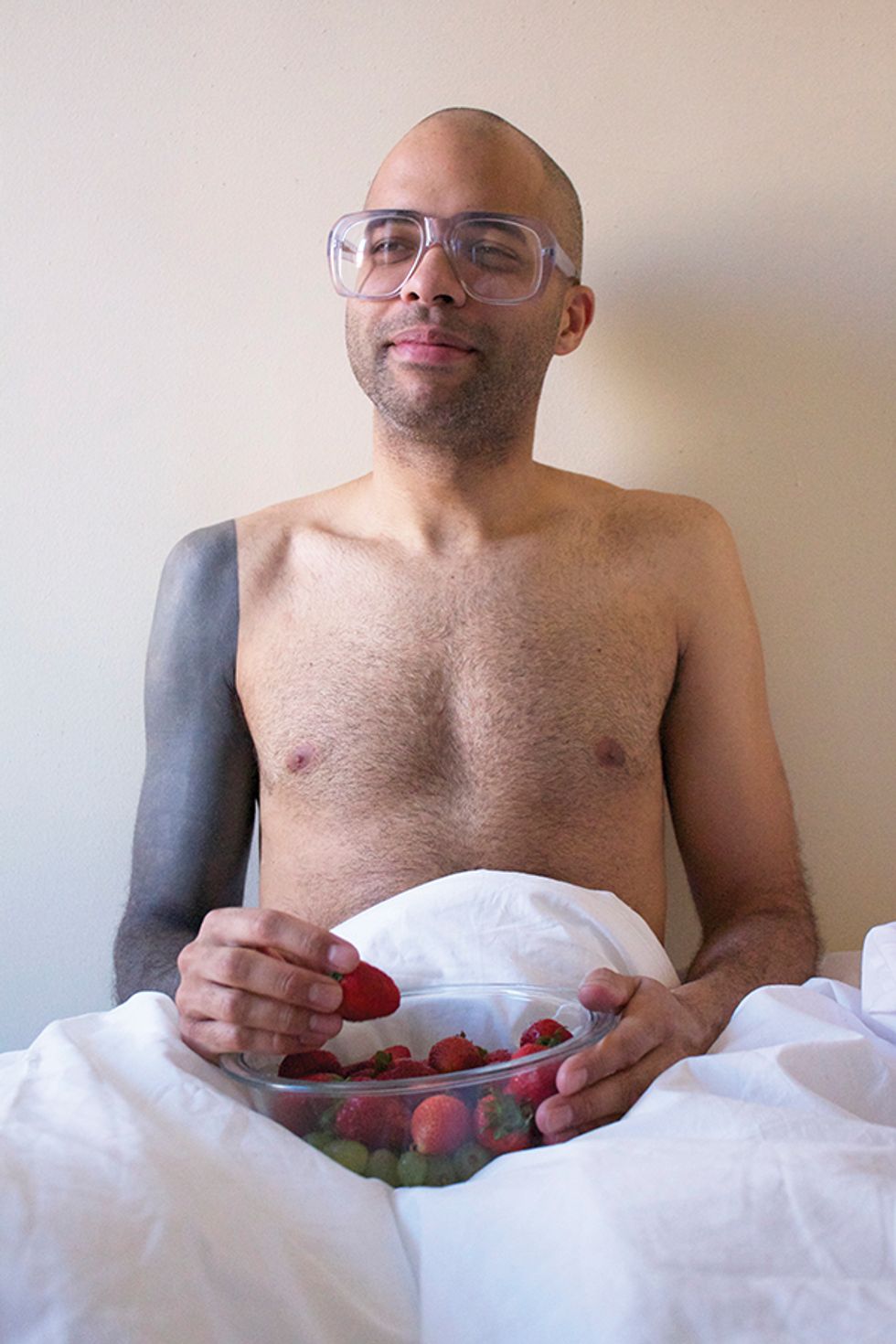 by PAPER
PAPERMAG
Meet 10 of the most exciting painters, photographers, net artists and performance provocateurs working today -- and check out the wildly diverse ways they redefine the theme of our April issue: the American Dream.

Photo by Kathy Lo; Chloe wears a sweater by Maryam Nassir Zadeh, a jacket by Acne and a skirt by Narciso Rodriguez / Styling by Jessica Zamora-Turner / makeup by Alexis Williams at LVA Artists using Chanel Cosmetics / hair by Aleksandra Sasha Nesterchuk using KÃ©rastase France / Styling Assistant: Jordyn Payne / Location: Dune Studios
Chloe Wise
Mixed-media artist Chloe Wise cracked the art and fashion worlds last year with a perfectly executed troll: a Chanel-branded bread bag sculpture. The piece, titled "Bagel No. 5," was worn by model India Menuez at an event for Lagerfeld's fall 2014 season, attended by uncle Karl himself. Fashion folks assumed the bag was a part of his campaign, only to discover that it was an oven-fresh commentary on the fashion and consumer art worlds.

"Being able to make anything legitimized as a trend because it has a brand name attached to it completed my critique," Wise says. "Watching the fashion world unknowingly embrace a critique of itself was hilarious and awesome."

With her first solo show, at Division Gallery in Montreal, under her belt and  another solo show in Switzerland later this year, this Canuck, who's logged a year and a half in NYC, is already breaking our cultural code. "The American Dream is me chugging Starbucks and Juice Press every morning and being able to live in a place where the stuff I want to make can be made."
[Emily Warman]


Petra Cortright
A YouTube star through the the high-art lens, Petra Cortright creates videos, paintings, sculptures and performances that blend the analog with the digital. From webcam dances to emoji paintings to a video collaboration for Stella McCartney's AW14 collection, Cortright has made net art look great both online and IRL. [Kate Messinger]

Angela Washko
Whether it's talking feminism inside the male-dominated online game World of Warcraft or publicly challenging the Internet's most famous misogynist (that would be BANG author Roosh V), new-media artist Angela Washko is all about bringing feminism into unexpected contexts. Using the Web as a sounding board, Washko asks hard questions with tactful wit, taking the conversation far beyond the courthouse. [KM]
My American Dream has nothing to do with a two-car garage and everything to do with empathy, respect, visibility and appreciation for those who may not come from the same background or share your interests.
--Angela Washko

Allie Pohl
Society won't shut up about how we're supposed to look, so Allie Pohl makes gender and beauty stereotypes too big to ignore. Taking the measurements of the "Ideal Woman" -- 36-24-36 seems to be the mainstream consensus -- the L.A.-based artist distorts Barbie-like forms. (More recently, she's turned her attention to assumptions of male beauty.) She shows these large plastic sculptures in many sizes, colors and iterations of faux-pubic hair to highlight the lack of human qualities and reroute our concept of physical ideals. [KM]

Photo courtesy of Nate Hill
Nate Hill
Throwing cheeseburgers at pedestrians; a photo project using white women as scarves; a voting website called "Light Skinned or Dark Skinned?" Nate Hill's performance art is anything but PC. But behind the shocking antics and controversial topics, Hill is not concerned with making people mad or uncomfortable; his work is about jumpstarting conversations on race, gender and class -- and allowing us all to laugh a little in the process. [KM]

Sam McKinniss
Glowsticks, reclining lovers, ghosts... Sam McKinniss applies a classical religious style of painting to distinctly modern tableaux of longing and romanticism. Circling the "gay gaze" with soft precision, the Connecticut native details a mixture of social connection and narcissism half-naked men find on their phones, often in bed. And while there's a sexy sense of excitement and fun in his work, it's often shrouded in self-reflection and lurking questions of identify. His work depicts the immediate cultural moment with timeless execution. [EG]

Phoebe Collings-James
Working as both an artist and model, half-Jamaican UK native Phoebe Collings-James brings activism into every form she takes on. Whether it's refusing to wear designers who won't cast models of different races or starting a feminist blog called Cunt Today, Collings-James is not afraid to cross lines or push buttons. Her paintings, sculptures and performances have a weighty sense of materiality and fanciful anthropomorphism -- fitting for the themes she frequently returns to around race, sexuality and feminism. [KM & EG]
The American Dream was built by the hands of slaves and the dreams of immigrants. A new American future should be one where those people finally have a voice.
--Phoebe Collings-James

Arvida Bystrom
Arvida Bystrom's photography may be candy-colored like her hair, but her work is far from sweet. Shooting for magazines like Wonderland, Rookie, i-D and more, Bystrom uses a glittery teen-girl aesthetic to highlight gender and sexuality stereotypes in pop culture and beyond. There Will Be Blood, her 2012 editorial for Vice -- a look at menstruation that managed to shrug off knee-jerk revulsion and fetishistic baggage -- might have brought her new levels of attention, but a look at her adored Tumblr suggests that she's poised to make deeper, bigger statements very soon. [KM]

BACK TO OUR 2015 BEAUTIFUL PEOPLE
You May Also Like
Entertainment