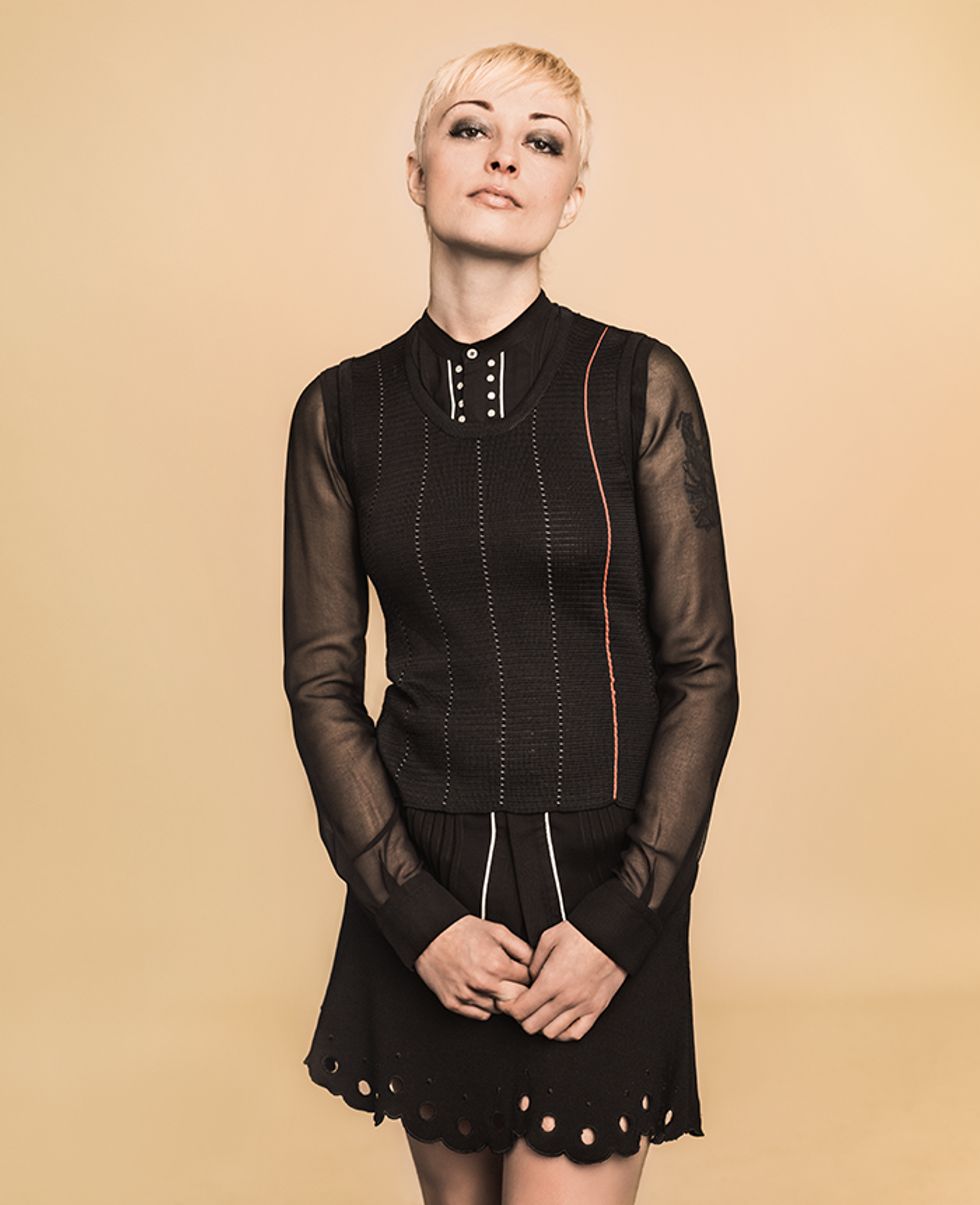 by James Rickman / Photography by Rodolfo Martinez
PAPERMAG
PAPER is proud to present a conversation with Arielle Holmes -- star of the forthcoming Safdie brothers drama Heaven Knows What and member of the Beautiful People Class of 2015. Holmes' real-life experience as a homeless, addicted teen is the basis of the film, and her near-total lack of acting experience didn't stop her from bringing a merciless intensity to her role. Read on for her take on the American Dream (the theme of our April issue), and meet Arielle's classmates here.


How long have you been in LA?
Since August, so like seven months. I was born here, but when I was not even a year old yet, I moved to Jersey, where my mom's from. So I grew up in Jersey.
What's a typical day in LA for you?
It depends. I just finished shooting this movie in buffalo called Winter's Dream. And in a month I'm going to start on a third project. I can't tell you what that is, not yet.
How's are you adjusting to this new life? I imagine it's pretty different from when Safdies came along.
Completely different. It's hard adjusting, you know? But I'm getting the hang of things. Just feel a lot better about life and everything I'm doing. It's good now.
Was it ever challenging or frustrating to see your story translated into a fictitious piece of cinema?
No, not really. I'm really happy with how the movie came out. I don't really see it as my story; I feel like it's just the story of that lifestyle in general. And I love how it was expressed. Whatever changes that were made from what actually happened in my experience, I'm fine with it.
Did you have any acting experience at all before Heaven Knows What?
Not at all. Aside from a couple school plays when I was in third grade or so.
What was the most challenging scene to shoot?
Probably the scene where I freak out on the bus. Josh [Safdie] was explaining to me how he wanted it to look like a ballet or a dance in a way. I don't know if I made it look like that at all, but I tried to be very flamboyant, I guess, with my motions. Animated, that's the word. And then when I sat down and kicked the bus apart, that was really fun. [laughs] I accidentally broke the window.
Wow.
That changed the whole movie, actually. There was originally a different ending, but since I broke the window, we were like, "Alright, well, if she actually broke a bus window in real life they'd probably throw her off." So that's where the ending came from, but I love that it worked out that way, 'cause I think it ends perfectly.
So originally you weren't going to make it back to New York?
Yeah, I was going to make it to Florida, alone, and end up helping this guy move these boxes or reptiles or something like that, and that would just be the end. But I like how it ended so much better.
Tell me about the first time you saw a full cut.
Like getting to view myself through another perspective, through someone else's eyes. And I actually got to see myself and how I was living and what I was doing -- it was very surreal. Now when I watch it, it's more separated from myself, more like it's just a character.
Heaven Knows What is based on a memoir you wrote about. What's the status of that?
I don't know when it will come out. It's not as ready as I thought it was. At first I intended to publish it as a memoir, but I don't want to do that anymore; I want to take all those writings and turn it into a work of fiction. I want it to be more like a story than my personal diary, you know?
How do you define the American Dream?
Mine is just to be open to anything I can possibly do -- to express myself and find out who I am and understand other people better. Getting to a place when I'm older and can look back -- I've had all these experiences and led a full life. To have a family at the end.
Last question: what's your take on legalization?
Drugs should be legal. I believe we should all be informed about all of them, and people who would go down a bad path and really destroy themselves should be helped, rather than put in jail. People don't get fucked up drugs because they're happy, you know? And recreational use -- I think that if drugs were legal and accepted as a thing that some people choose to partake in, I don't think it would lose as many lives, because there wouldn't be a need to hide it; they wouldn't have to worry about losing their jobs or being arrested. I'm not saying people should use drugs, but there are a lot of benefits that can come out of certain drugs. But in the long run, it's your choice. People are doing drugs whether they're legal or not, and I think one of the reasons they're illegal is because the government makes money off it by putting people in prison. Then you've got the pharmacy that prescribes really dangerous drugs to people. Those are legal. It's a messed up system, but I hope it changes. Somehow.

Styling by Jessica Zamora-Turner, hair and makeup by Christy McCabe at Utopia the Agency

BACK TO OUR 2015 BEAUTIFUL PEOPLE
You May Also Like
Music