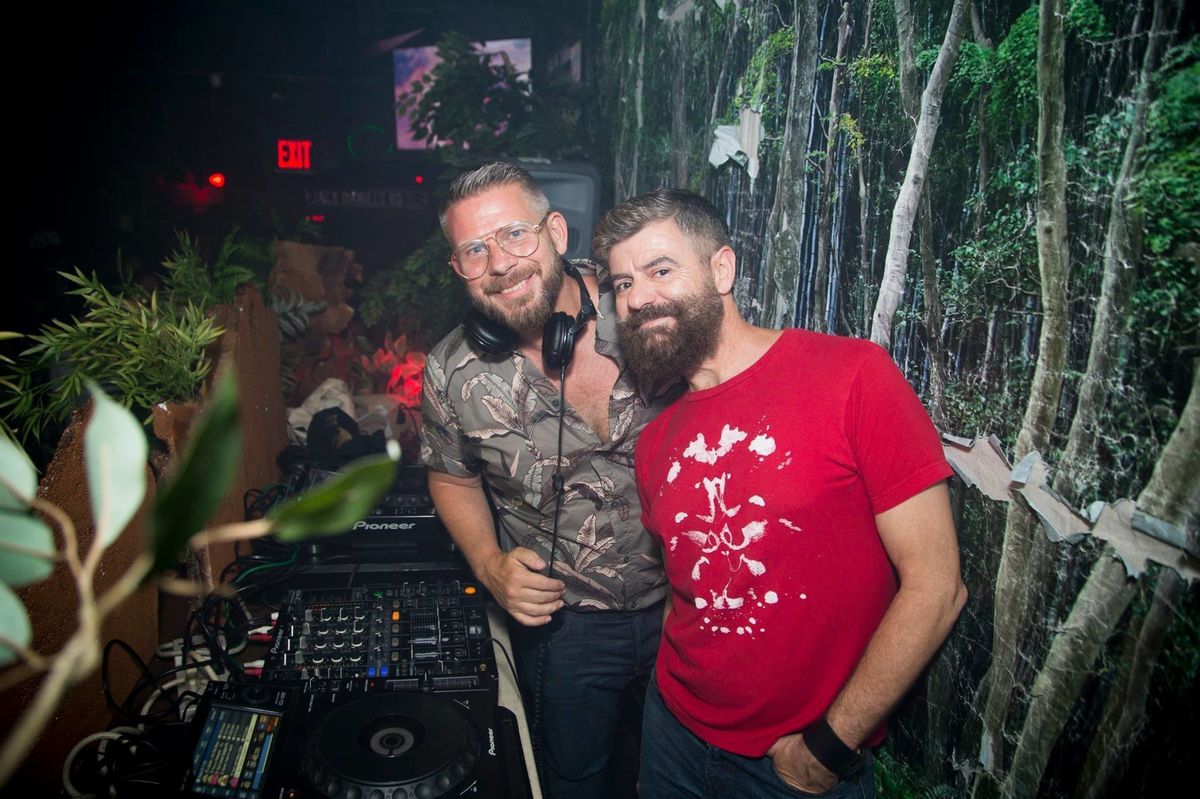 As far as West Coast nightlife dynasties go, there are only a handful of parties that can hold a candle to the longevity enjoyed by queer LA institution Bears in Space. Now in its 10th year, the seasonal 12 hour party hosted in the lot behind Silver Lake club Akbar began its life in 2009 as the creative brainchild of Chris Bowen and Black Disco label man, Kevin Carney, who started the night with the blessing of Beats in Space host Tim Sweeney.

Bringing in DJ and mentor Victor Rodriguez in 2012 following the departure of Carney, Bears in Space has grown into a summertime hub for LA's LGBTQ+ community. Featuring drag shows, food trucks, and sets from underground veterans like DJ Harvey, Optimo, Discodromo, Eric Duncan, Lovefingers and Heidi Lawden, Bowen and Rodriguez have worked over the years to build an all-inclusive space where bears and otters, twinks and daddies, and queens of all shapes and sizes can find a home on the same dancefloor.

Ahead of their upcoming appearance at LA's Secret Project Festival, we asked Bowen and Rodriguez to reflect on the past decade of Bears in Space and share with us some of their personal highlights:

"One of my favorite memories is from our Cub Scout party at the Eagle, which is a gay leather and fetish bar. One night we had Juan Ramos, who happens to be a dear friend of ours from Berlin. It's around midnight and he's playing, when all of a sudden the power goes out on stage. I rushed up to try and figure out what happened by tracing the source to giant metal spider web behind the stage that is part of the bar's permanent decor. Apparently there was a gimp covered head to toe in black latex that had climbed onto the metal web and accidentally kicked the main power cable out of the socket. Oh well — Victor and I always say, 'There's a lid for every pot.'" -Chris Bowen

"We have had so many amazing DJs come play our dance floor at Bears in Space who have each brought their own incredible musical stories. To me, probably one of the most special parts was ending the nights. For those who are tuned in, the last track wraps up the whole set and releases the dancer from the floor and sends them home, or wherever, with a big loving, musical embrace. One of those such moments came from Heidi Lawden and Lovefingers set last year. Heidi played this stunning live cover of 'Could It Be Magic' a capella by Sylvester masterfully blended into Stars. I lost my mind, as I never even knew Sylvester did a cover of one of my favorite Donna Summer songs, which was also written and sung by Barry Manilow. It truly was a magical moment, I'll never forget that." -Victor Rodriguez

"One of the major draws to Bears in Space and our first party together, Shits & Giggles, has always been the drag shows. We've had an array of performers over the years, but one of the most shocking performances of all time was from Fade-dra Phey, who is notorious for pushing boundaries. We partnered with San Francisco-based drag performance club Trannyshack at S&G for a one-off and she was performing. When it was Fade-dra's time to perform her track, which featured a female rap vocal chorus of, 'I be shittin' on you hoes...,' she midway reaches into a diaper she was wearing that she had strategically filled with several ounces of chocolate pudding, knocks down a rival drag performer and flings the chocolate pudding onto them. I have yet to witness a more horrified audience than ours that night. Several hundred queens shrieked in absolute terror as the pudding splashed a good portion of the crowd." -Chris

"Another very special moment came by way of Óptimo for a joint Bears in Space / Lights Down Low party back in February 2017. It was right after 'IT' took office. Our community was still very raw from this horrific situation we were all in. But, as in many other dark times in history, we turned to our dance floors to lose ourselves in music. The Óptimo guys knew exactly what we needed and in the middle of their mind-blowing set, they dropped this speech written by Nina Donovan recited by Ashley Judd at the Women's March in Washington D.C., which had happened the month before, over a stark techno beat. People were moved to tears and cheers. It was such a moment of light at a very dark time. In the words of Gary Bartz, 'music is our sanctuary, music is our life.'" -Victor

"Our door personnel have always been an important component of all our clubs. They are the first people you see upon entering, so [they] are charged with representing us. We've been lucky enough to have some amazing people at our door, such as Phyllis Navidad, Miss Barbie-Q, Zackary Drucker, Tammie Brown, Wu Tsang, Will Perdomo, Torrie Gregor, Joe Faron, and currently Sinan Shihab. I remember when S&G was in its beginning, we were at an underground loft space on Skid Row in DTLA with approximately four drag queens. They were shuffling guests up a freight elevator to the party in full face wearing Chanel pencil skirts. It just felt like we were doing something right." -Chris

"We once did a club a few years back called Brown & Serve replete with a 20-foot raised runway with an industrial fan at the end, which guests were invited to walk for a midnight runway competition. There was a cash prize as well as the title of Miss Brown & Serve. We had Miss Brown & Serve sashes specially embroidered for the occasion. I think we would have kept going but it was a lot of work. Especially personally cooking 200 crescent rolls to place at the front door — I'm not very good in the kitchen." -Chris