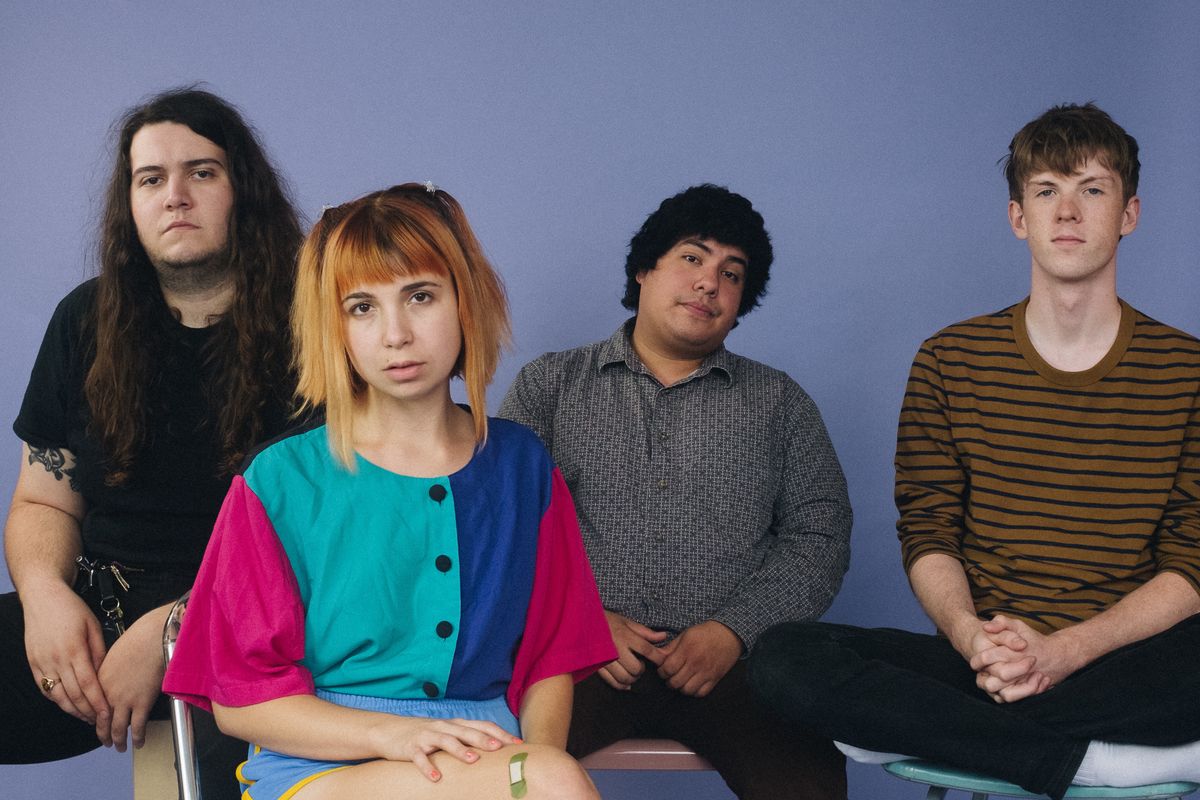 Lili Trifilio never expected any of this. The 23-year-old frontperson and songwriter of Chicago band Beach Bunny started the project in 2015 as a way to kill time on a college break. In 2017 she added three more musicians to flesh out her songs into full-band arrangements, but that was supposed to be temporary too. After a year of gigging and building a name for themselves in Chicago's fertile indie rock scene, Beach Bunny released the five-song Prom Queen EP and hopped on a short West Coast tour with Minnesota emo rockers Remo Drive.

The band's steady growth over the next two years was promising, but nothing crazy. Then came their remarkable explosion on TikTok. In April 2019, Beach Bunny were about to record their debut record Honeymoon when people started tweeting at Trifilio to tell her that the song "Prom Queen," from the EP she'd released eight months earlier, was becoming a sensation on Gen-Z's beloved video sharing app.

"I didn't even know what TikTok was," Trifilio tells PAPER. "So people kept tweeting at me being like, 'Did you know this is blowing up?' and I was like 'Oh, cool' but I really did not put much thought into it until I saw that reflected in the Spotify [streams]."

TikTok has re-written the rules for how a song can thrive in the streaming era. It wasn't high-budget promotional strategies and major label resources that took Lil Nas X, Lizzo and Roddy Ricch to the top of the Billboard charts: it was random teens making their songs go viral with dance videos. The app's democratic structure theoretically puts indie artists and pop stars on the same playing field, providing equal opportunity for all songs to thrive no matter what the artist's popularity is outside of the app.

"Prom Queen" is a perfect example of that dynamic in action. Even though the self-released song had been out for almost a year and the band weren't even actively promoting it anymore, TikTokkers connected with it in a big way. At time of writing, the song has been featured in over 443k TikToks that range from teens tearing up at its angsty lyrical content, making it the backdrop for body positivity activism, or merely using it as a hooky soundtrack for cooking ramen.

The band is now staring down a near-sold-out U.S. tour, slots at both Coachella and Shaky Knees Festival, and streaming numbers that dwarf any of their closest sonic comparisons — all before the release of their debut album. Memes aside, their story is a simple yet rare instance of a genuinely great songwriter catching the right breeze.

Trifilio has lived in Chicago for her entire life. She had a normal, self-described "chill" suburban upbringing in Edison Park, a predominantly Irish Catholic neighborhood in the city's northside. Although her dad signed her up for guitar lessons in fifth grade and she grew up listening to acts like Led Zeppelin and Pink Floyd, she spent a lot of her youth playing sports year-round. Her family wasn't super religious, but her parents still sent her to an all-girls Catholic school.

"And in the moment obviously I was kind of like, 'Where the boys at?' But it was probably for the best," she recalls. "I probably dodged a lot of bad seeds."

In her early teens Trifilio was really into planning school dances, which gave her some control over the sacred soundtrack. At the time she was mostly into pop stars like Rihanna and Katy Perry, but if she were in charge of those events today then there's a good chance someone would request a track like "Prom Queen"— an anthem for those who feel inadequate at the school-sponsored function.

In high school Trifilio made the jump from dance-pop divas to indie-pop bands like Foster The People and Bombay Bicycle Club, building her own musical foundation in strong melodies and electrifying instrumentation. The summer after graduation she began dabbling in songwriting for the first time as part of an acoustic duo with a friend, but when Trifilio started college she started writing her own material, immediately falling in love.

"On a personal level, I feel like [songwriting is] very therapeutic and it's a nice healthy way for me to channel emotions," she says. "Especially if I'm going through something that's maybe not super awesome. I'm a fairly sensitive person, so I think that music is a great outlet for that. I also really love the performing aspect, it's really fun getting to connect with people through art."

From 2016 to 2017 Trifilio released three EPs as a solo artist and became a known figure in the city's college-oriented DIY basement scene. She had no immediate plans to open Beach Bunny up to other members until she got wind of a local battle of the bands competition that required full bands to contend. She found three other people who were interested in learning her songs and they signed up.

"We didn't win, but the battle of the bands was like a three-month, playing-every-weekend kind of thing," she says. "It was pretty long. And at the end of it I was like, 'Do you guys want to continue this, cause it sounds really good?' And they were free and down."

Fast forward to spring of 2019. The band had picked up steam and were about to enter the studio with producer Joe Reinhart (of Hop Along and Algernon Cadwallader fame) to record Honeymoon when the TikTok stuff happened. At the same time Trifilio was about to graduate with a journalism degree, and she was stressed about how she was going to continue the band (her primary passion) while also maintaining financial stability. The tumult of that time period made the TikTok popularity even harder to process, especially because "Prom Queen" was the song Trifilio was most nervous to make public.

"Just because it's not a romantic-based song, which is what I normally release," she says. "So I didn't really know how it would be perceived, and I was kind of scared that people would read into the lyrics wrong or something like that."

Food that you can eat with braces:) #Fyp #braceshelps #braces #foryoupage

Despite some dark lyrical content ("If I'm pretty will you like me? / They say 'beauty makes boys happy' / I've been starving myself / Carving skin until my bones are showing") the song, like most of Beach Bunny's output, is peppy indie-pop that radiates a sense of emotional victory, as if Trifilio has expelled the unpleasant subject matter and is now singing from a place of resilience. Fortunately fans — primarily the many young girls who are front-row at Beach Bunny shows — appear to echo that sentiment.

"From what I've seen, everyone has been posting body positivity things and people who've seen it through TikTok sometimes after the shows will be like, 'After listening to it, it helped me with my self-worth' or something like that. Which is always amazing to hear."

The songs on Honeymoon are mostly rooted in romantic relationships, specifically the intros and outros of that joyful early relationship phase. The record begins with tales of the non-committal and works its way down to heartbreak and then all the way back up to heavenly infatuation. The songs are uncomplicated, punchy, honest, youthful and irresistibly catchy. It's no wonder that Trifilio's writing style resonated with teens on an app that's built for lip-syncing.

That said, Trifilio emphasizes that Beach Bunny has no intention of becoming a "TikTok band." She's grateful that the platform helped her band gain an audience outside of the indie-punk crowd, but she doesn't want to get lumped in with dissimilar acts simply because they both happened to get popular on the same platform.

"I feel like sometimes, not just with TikTok, but with YouTube and music that blows up through social media, those bands sometimes get categorized in a certain way. Which I'm trying to avoid."

Her ebullient vocal delivery and straightforward lyrics have a classic pop charm; a style that's as comparable to Taylor Swift as it is to Charly Bliss or The Beths. Trifilio has a knack for translating especially messy emotions into refreshingly succinct pop-rock songs. But to her, paring down those experiences into something digestible is as essential to her own emotional process as its her audience's. She's just happy that it goes both ways.

"I think maybe [my writing style] is something that I can relate the most to," she says. "Luckily, other people can relate to it in the same way."