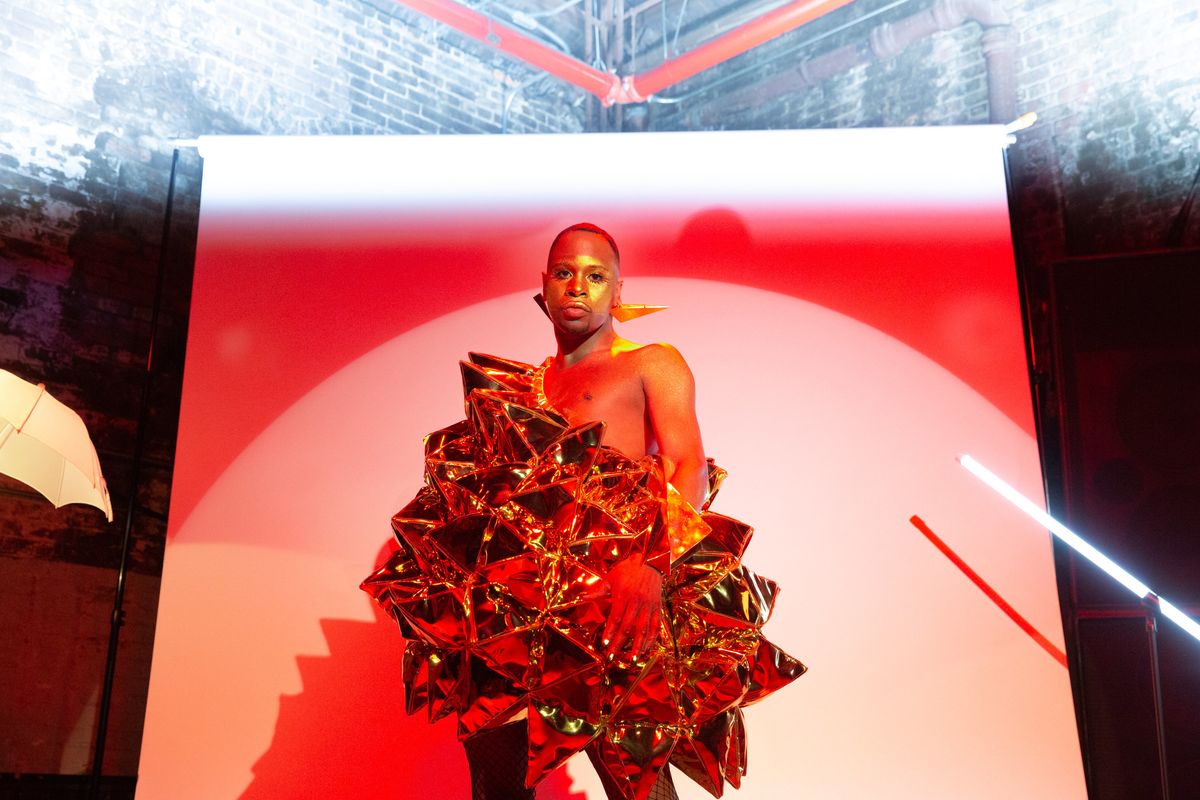 Nothing can replicate the explosive energy of a BCALLA show. Outside Brooklyn's 3 Dollar Bill during NYFW, nightlife legends lined up alongside baby queerlings, all dressed in head-to-toe looks that fill a void in reality — the kind of missing space that only club culture can feed, in the way it challenges people to create a fantasy unlike anything they've seen in everyday life.

For fall 2019 — styled by PAPER's Coolest Person in the Room Marta Del Rio — Callahan aptly partnered with Susanne Barstch, the woman credited for helping launch RuPaul's career and bringing fashion powerhouses John Galliano and Alexander McQueen to the States. The show played out like a party, with guests sipping cocktails and dancing to pounding electronic, before Barstch herself introduced the collection with her thick Swiss accent. After all these years, she's still New York's greatest hype man.

Callahan focused this season specifically on the ballroom community, pulling together an entire cast of real performers with support from runway instructor Gillette Harris. One-by-one, they dramatically walked onto stage, confidently using (at least) a full minute to offer cameras as many options as possible in their gold-and-black outfits. They posed — contorting limbs, dipping low, twisting necks — recalling a distant era of '90s fashion that leaned into drama.

PAPER documented all the excitement, and caught up with Callahan to break down his latest lineup, "Lost Moments, Captured Forever," below.

The people inside your looks have always been important to BCALLA. What made you decide on this specific cast?

I knew I wanted to do a walking presentation, and I'm also really aware that it takes a certain type of person to carry my clothes. I was listening a lot to Malcolm Mclaren's album Waltz Darling, so it made sense to cast from the ballroom scene, which I knew would deliver strong walkers in the tradition of '90s-2000s runways I grew up on. I reached out to Raul Lopez from Luar, who hooked me up with Gillette Harris. He cast the whole show, and man — did those models deliver.

Why are you calling this collection "Lost Moments, Captured Forever"?

The title of the collection is from a book I read recently titled Retromania, about pop culture's addiction to the past. In part of the book, the author talks about people who are obsessed with esoterica, and how the main draw behind this obsession is the idea of lost moments, captured forever. I immediately responded to this concept and recognized my own interests within it. A large part of my process is scouring the Internet for music videos, live performances, or old movies, as I believe fashion is deeply connected with culture at large. I found that pre-code silent films (from 100 years ago) had the most outrageous costumes that could absolutely be relevant on the runways today — so I tried to create clothes that captured this concept of timeless glamour.

Also, I knew I would be doing a show, not only a lookbook, and the only way to truly experience the show was to be there — you can review the photos and video as much as you'd like but those are all just "Lost Moments, Captured Forever." This concept was extended to the set and show with the art direction of Michael Burk, who set up a mock live photo shoot. Partnering with the ballroom scene worked well because we have all been looking at the same shows, studying the same lost moments; they all knew what to do without much direction and I think we all collectively knew we were creating something that we've all dreamed of being a part of.

"I think we all collectively knew we were creating something that we've all dreamed of being a part of."

Did you create the looks with a specific model in mind?

No, I knew I was going to have a pretty strong variety of shapes and sizes, so I designed most of the looks to fit between a size 4-10. Once everyone was together in the venue, I sized them up and put them in what I felt went the best with their personality. It was so much fun because each of the girls got into their outfit in the dressing room, then came out and strutted their stuff for all the other models, creating a really magical moment.

Previous collections have been loaded with color, but this was focused on gold and black. Any reason in particular?

Again, going back to the book Retromania, the author talks about how, with the advancement of technology, we have all this access to information/ inspiration — but in actuality, we get weighed down and trapped with all of this information. True freedom comes from constraints, so by limiting my color palette to just two colors, I would be free to concentrate on silhouette and technique. In all honesty, I walked by my favorite fabric shop, saw the gold vinyl, and just knew that was the main fabric for the collection. Neneh Cherry's album cover also influenced the color story, as I knew I wanted this '90s New York feel, and when I think of that Neneh's gold chain and black athletic gear comes directly to mind.

Why did you decide to partner with nightlife legend Susanne Bartsch for the presentation?

It all happened very naturally, Susanne had bought a few of my pieces and was in my showroom fitting for new custom looks when the subject came up. I told her I was looking for a space to show my collection, and she offered her stage at her party "Play Now." [at 3 Dollar Bill in Brooklyn]. Anyone with the slightest knowledge of underground fashion knows Susanne is a major player in that scene (she was the first to bring Galliano and McQueen to America!), so of course I was more than honored to partner with her on this show.

"I am forever grateful for my community; they have supported and nurtured my brand since its inception."

Throughout your career you've stayed very connected to the queer community. Why is that important to you?

I am forever grateful for my community; they have supported and nurtured my brand since its inception. I get billed as a drag designer a lot, but the fact of the matter is that when I was young and hungry in New York, the drag queens and performance artists needed looks, and no one would dress them. I stepped in because I didn't feel they demeaned my clothes, but rather gave them life through performance. Clothes are just fabric without a body in them.

I've always been obsessed with underground stars and trying to find the "root" of culture. The Southern California punk scene is where I found my "fashion voice" as a teen. It's in these spaces where creativity is encouraged and stars are born. I think I've had this long romance with the underground because I have experienced so many moments where a performer is wearing one of my looks, doing their thing in some bar and the light hits just right and everyone knows a star was just born. A lot of girls I've dressed have gone on to big things; I don't claim responsibility for that, but I think that someone seeing their potential... someone appreciating what they have to offer is encouraging and can help give them the confidence to keep going — and I think it's a very symbiotic relationship.