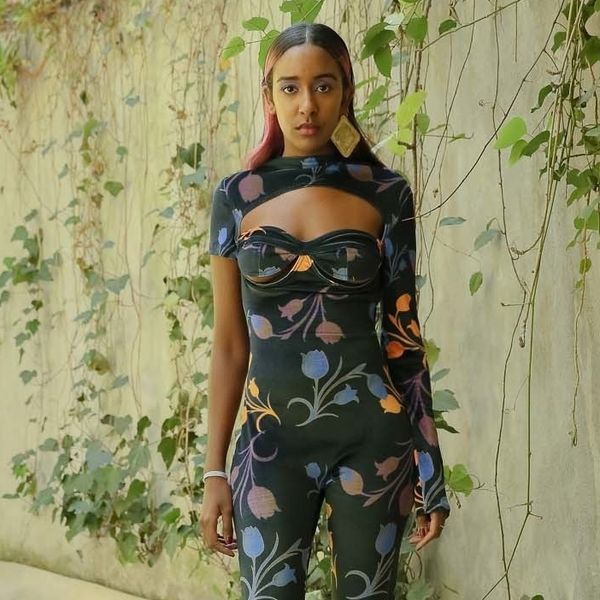 Designer Victor Barragán's shows are always an event. Barragán presentations are daring and dramatic, which suits the boundary-pushing label: he has hosted shows inside downtown discount emporium Century 21 while shoppers browsed away; he built a set — with frequent collaborator Ruben Gutierrez — at the Standard Hotel with giant boulders that recalled the myth of Sisyphus; models frolicked in Barragán looks (and their underwear) in a steamy, neon-light Turkish sauna in Paris.

Related | Gourd Your Loins for Barragán

Barragán is primarily based in New York City. But for his fall 2019 show, the designer returned home to Mexico City, presenting his collection at the Archivo de Diseño y Arquitectura, a stunning design center. Models walked through a Luis Barragán garden (no relation, but Victor is always asked about it) down the building's famed spiral ramp, recalling the view at his Century 21 event, where models descended the enormous staircase in the center of the store.

The collection, styled by Tess Herbert, was so, so cool; the show marked the debut of an official Barragán monogram, which covered denim and my personal favorite look, a slouchy off-the-shoulder top worn over a flowing peasant skirt. Dark florals abounded, and wide draped dresses looked like something an heiress would wear on vacation in Acapulco in the '70s. His proportions — with chest cutouts and wide sharp shoulders and one-armed catsuits — aren't really like anybody else's.

Earlier this month, Barragán released his spring 2019 campaign, shot by June Canedo at the pyramids of Teotihuacán. His new logo plays with both indigenous symbolism and the design cues of Mexico City. "We were colonised almost 500 years ago," the designer told Dazed. "But we're still feeling the repercussions. We have to push for a better narrative that doesn't revolve around western beauty standards."